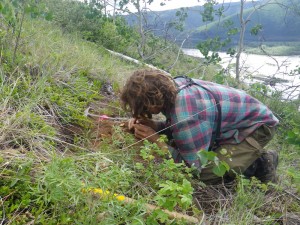 Comstock Metals Ltd. (TSX VENTURE:CSL) is pleased to announce the start of the exploration program on its QV Project in the Yukon. Drilling on the newly discovered VG Zone has commenced as of June 2, 2013. A cold spring in the Yukon Territory has caused a late start to exploration activities.
The QV exploration program includes follow-up drilling on the VG Zone discovery as well as soil-sampling and trenching on two new zones, namely Stewart and Shadow Zones, in addition to the VG Zone.
The VG Zone was discovered last year by following up a 394 ppb gold-in-soils anomaly. Trenching and subsequent drilling discovered the VG Zone, which is geologically similar to the adjacent Kinross Gold’s Golden Saddle deposit. Seven out of eight diamond-drill holes intersected significant gold mineralization, including 2.34 grams per tonne gold (g/t Au) over 89.85 metres (m) including 3.04 g/t Au over 45.50 m. The current 2013 drilling program will focus on expanding the length and the width of the zone to determine the size of the ore body. Follow-up Phase 2 program on the VG Zone will be contingent on the results from the current drilling. The Company is assisted by the team who discovered Kinross’s Golden Saddle deposit, including Shawn Ryan and Adrian Fleming. The Company also announces issuance of 25,000 options at the price of $0.21 to certain officers and consultants.
About Comstock Metals Ltd.

Comstock Metals’ flagship project is the QV Property in the Yukon Territory, which covers 14,180 hectares (35,000 acres) within the prolific White Gold District in the Yukon Territory, about 70 kilometres south of Dawson City. Kinross Gold’s Golden Saddle deposit is 10 km to the southeast, and Kaminak Gold’s Coffee projects are about 40 km to the south.
Comstock’s Corona Gold-Silver Property is located in the prolific Sierra Madre Occidental in Chihuahua, Mexico. The Company completed a drill program in the spring of 2012, which discovered two new zones of gold and silver mineralization.