Ximen Mining  is positioning itself to be British Columbia’s next significant gold producer through exploration and acquisitions.

Ximen Mining Corp. owns 100% interest in three of its precious metal projects located in southern BC.  Ximen`s Gold projects are the Kenville Gold Mine, the Amelia Gold Mine and the Brett Epithermal Gold Project. Ximen also owns the Treasure Mountain Silver Project adjacent to the past producing Huldra Silver Mine.

Currently, the Treasure Mountain Silver Project is under option agreement. The option partner is making annual staged cash and stocks payments as well as funding the development of the project.

The company’s flagship project, the Kenville Gold mine near Nelson, British Columbia, is production ready. Ximen owns the surface and underground rights, buildings and equipment as well as a permit for the construction of an underground decline. 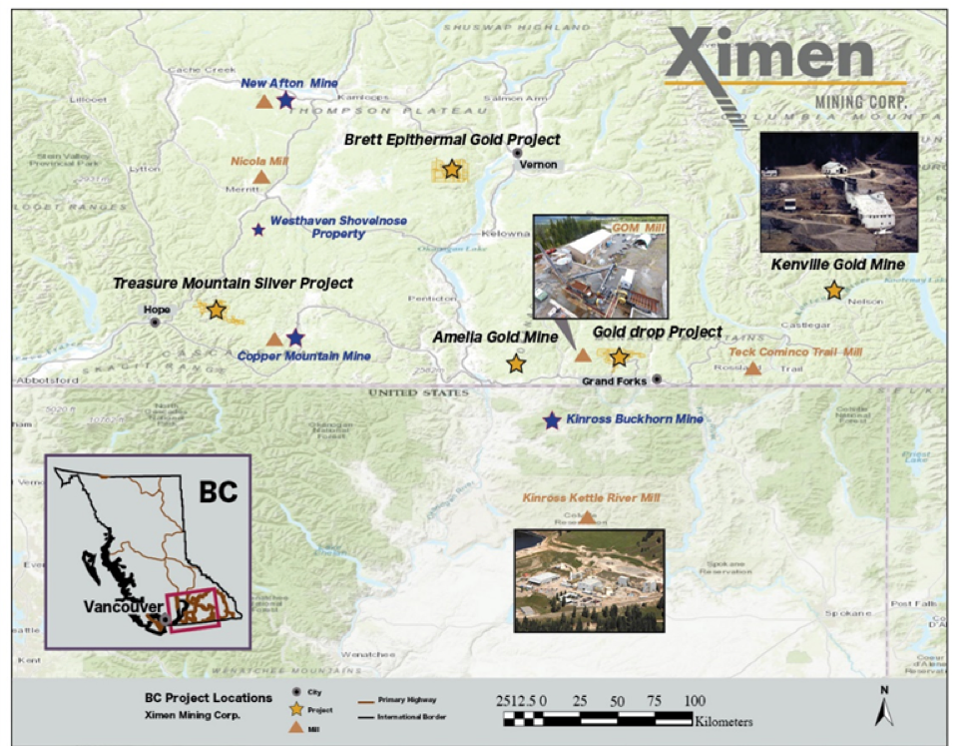 In 2019, Ximen acquired the former producing Kenville gold mine along with all existing permits, infrastructure and equipment. The Company then initiated permitting to develop a new 1200 metre decline and do underground drilling. Once this work gets underway, the Company will move toward extracting a bulk sample for offsite processing. To date, surface buildings and roads were rehabilitated, the portal site for the decline was stripped, a transformer for hydro power supply was installed, and a new mine compressor was purchased. Water and waste rock quality surveys were completed, showing that the mine drainage water is high quality and the waste rock is non acid generating. The Company intends to be extracting a bulk sample this year and then be in a position to move toward continuous production. Historically, the Kenville mine produced 65,381 ounces of gold from 158,842 tonnes processed.

The Brett Epithermal Gold Project is Ximen’s primary precious metals project. Since 2013, Ximen has owned and controlled 100% of this 20,025 ha. epithermal gold district, which is situated in southern British Columbia near the city of Vernon.

The Brett property has a history of surface exploration drilling, geophysical and geochemical surveys, as well as approximately 240 meters of underground drifting and raising, and a 291 tonne bulk sample processed at the Trail smelter for a recovered grade of 27.7 grams per tonne. Bonanza high-grade and bulk low-grade types of epithermal-style gold mineralization have been identified on surface and in previous drill holes. In 2019 Ximen initiated a permit to extend the underground workings and do diamond drilling to further define the main zone and explore parallel zones. This program is expected to be started this year.

In 2019, Ximen assembled a land position covering 1718 hectares surrounding and including the historic Amelia gold mine (see figure below). Historic production from the Cariboo-Amelia was 81,602 ounces of gold, 32,439 ounces of silver, 113,302 pounds of lead and 198,140 pounds of zinc. The average recovered gold grade was 24.68 grams per tonne gold (from BC Minfile). 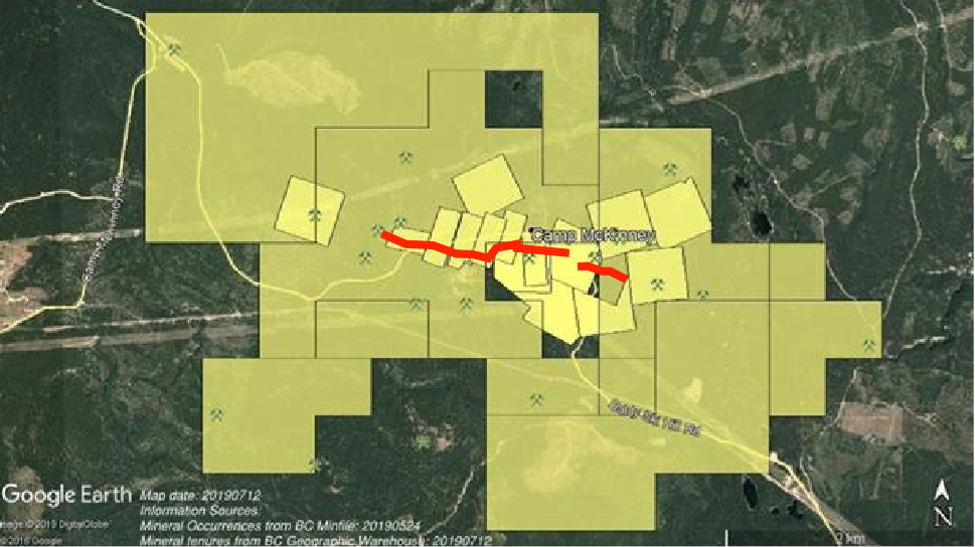 For 2020, Ximen is planning geochemical and geophysical surveys followed by diamond drilling. The goal is to locate extensions and parallel veins. Permitting will commence imminently.

Mr Anderson brings over 30 years of entrepreneurial experience with ‍‍‍an astute emphasis on strategic planning, communications and creative marketing. He has been instrumental in facilitating tens of millions of dollars of financing for both public and private enterprises. With a specific focus on mining over the last decade, Mr Anderson successfully navigated the waters of one of the toughest bear markets in mining history.

Mr. Kent brings over 20 years of sales and marketing experience to the team. For many years, Mr. Kent has been providing public relations counsel to various sectors including mining and manufacturing. He currently holds directorships with several public companies, as well as, provides finance and management consulting for both listed and private issuers.

Mr. Davis received an honours degree in mining engineering from Imperial College London, and was an associate at the Royal School of Mines. Throughout his career he has held senior positions in both private and public mining companies, including practical experience in exploration and production mining with amongst others, The National Coal Board(UK), NJ Zinc Company, Noranda, INCO and Goldquest. Mr. Davis also held senior agency positions in both advertising and PR with Burson Marstellar, and J Walter Thompson, specializing in copywriting, account management and new business development. He founded Short, Curnow and Cuthbert Media before merging it to form MediaPlus International(MPI) one of the foremost independent global media specialists in London. He was managing director of MPI for over ten years.

Mr. Warthe-Anderson received an honours degree in economics from the University of Victoria. In addition, he has formal training working with public companies, financing, and governance compliance through Simon Fraser University. Mr. Warthe-Anderson has an extensive background in marketing and statistical analysis. Over the past seven years he has worked on various mining projects throughout Canada.

Ms. Keith brings over 20 years of accounting and manageria‍‍‍l experience in both the public and private sectors. Ms. Keith has previously acted as chief financial officer of public companies listed on the TSX Venture Exchange and held a senior accounting role for a company listed on the New York Stock Exchange. Areas of focus for Ms. Keith will include regulatory reporting, capital management, business process improvements, system optimization, internal controls and management reporting. Ms. Keith earned an arts and science bachelor’s degree from the University of Victoria and obtained the certified General Accountants (CGA) designation thereafter.

Mr. Cooper has over 40 years‍‍‍’ experience in the mineral exploration and mining business, working primarily for major producers in North America.  He has been involved in three successful new gold mine start-ups and has overseen projects from the exploration stage right up to production.  Mr. Cooper played a significant role in the exploration, pre-production and development of Kinross’ Buckhorn gold mine located in North Central Washington State, close to the Canadian Border. Beginning in 2007, Mr. Cooper was Chief Geologist and then Manager of Operations strategy for Kinross Gold’s Kettle River Operations. Prior to this, Mr. Cooper spent the better part of 20 years working in the Republic Gold District of Washington State.

Mohan Vulimiri has many years public compa‍‍‍ny experience, having been involved in the management of numerous junior and established companies. A graduate of the Indian Institute of Technology (IIT Kharagpur, India) with a BSc Honours degree in Applied Geology and a MSc Degree in Economic Geology from the University of Washington, USA, he has over 30 years experience in the exploration and delineation of ore deposits with emphasis on structural controls and modes of occurrence of mineral zones.

Mr. Beaton has been actively involved in mining operations for over 40 years. Since becoming a member of the Association of Professional Engineers and Geoscientists of British Columbia in 1974, he has over 30 years of experience as mine manager for mining and development operations throughout Africa and across Canada. Mr. Beaton was the mine manager for Erikson gold mine from 1979 to 1986, which, at its peak, was the No. 1 gold producer in B.C. Mr. Beaton was also the mine manager for Huldra Silver Inc., which was producing ore from the Treasure Mountain mine in B.C. He has been president of A.J. Beaton Mining Ltd. since 1987. Throughout his career, he has been involved in over 50 minutes and civil jobs in B.C. and has thus gained a strong perspective on mining techniques and over a wide diversity of mining projects.

Mr. Teymouri has acted as a consultant, engineer and operations specialist as a mining engineer for base, precious and industrial metals projects. His combined financial and mining engineering experience has developed his credibility to interpret, evaluate, and comment on the feasibility of mining projects., either underground or open pit. His involvement in mine finance and strategic mine planning has focused on the maximization of mine returns and aligning mine planning with project financial objectives. Prior to founding MinelT Consulting, Mr. Teymouri was a senior mining engineer with Roscoe Postle Associates and a senior mining engineer developing mining projects at Alexco Resource Corp.

Mr. Mcpherson has over 60 years of experience in mining and mineral exploration. He has done extensive underground work including drifting, stoping, sinking shafts, driving raises, timbering, blasting and much more for a variety of private and public companies. Mr. Mcpherson has worked on many notable projects across Canada and the United States. Some of his work in B.C. includes sinking shafts for Bralorne Gold Mines and working underground at the former Dentonia mine.

Mr. Dykes has over 35 years of practical experience in the management, exploration and analysis of mineral properties at varying stages of development from grass roots to pre-development; and has been directly involved or responsible for the discovery of several mineral deposits, five of which have been placed into commercial production. Mr. Dykes spent 16 years as Mosquito’s exploration manager during which he played a key role in the acquisition and development of Mosquito’s principal mining properties: CuMo, Pine Tree, Spring Creek, Trikay and Blackpoint. Previously, Mr. Dykes spent 15 years as a project geologist for Westmin Resources Ltd where he managed a wide variety of projects with budgets ranging into the millions. He was responsible for the outlining and discovery of the Premier open pit deposit as a result of the analysis and computerization of an extensive historical database.Mr. Dykes also founded Geologic Systems Ltd. in 1994 to supply geological expertise to the mining and exploration community. Clients included Cominco (now Teck Resources Ltd.), Rio Algom, Echo Bay, Billington, Placer Dome and Redfern Resources. He has been involved in the evaluation, exploration and/or development of some of the world’s major mineral deposits including: CuMo, Voisey’s Bay, Cariboo Gold, Petaquilla, Dunka Road (now Northmet), Red Chris, Tulsequah, Pine Point (extension), Wernecke, HW and Myra Falls and Premier.

Professional Geologist with approximately 20 years’ experience in the mineral exploration industry. Graduated from the University of New Brunswick in 1984 with a Bachelor of Science Degree (Geology major) and from the New Brunswick Community College in 1994 with a Business Technology Diploma. Employed as a Geologist during numerous mineral exploration projects involving a variety of commodities including gold, silver, tin, tungsten, molybdenum, indium, copper, lead, zinc and antimony. Held senior managerial roles since 2005 including Regional Manager and VP New Brunswick Operations with Geodex Minerals Ltd. and VP Exploration with Great Atlantic Resources Corp. The majority of the exploration projects were in New Brunswick, Canada. Also involved in exploration projects and / or project generation in Nova Scotia; Newfoundland and Labrador; British Columbia; Spain; France and Ukraine. Played a key role during numerous mineral discoveries, the most significant being at the Sisson Tungsten – Molybdenum Project and the Mount Pleasant Tin – Indium Project, both in New Brunswick.

For many, Canada’s West Coast conjures images of a laid-back li... READ MORE


Metallurgical Testing to be Initiated for Kenville Gold