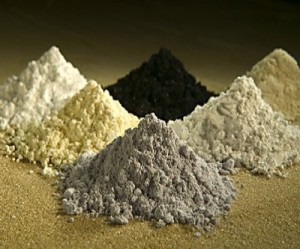 The July-August field program consisted of twelve NQ size drill holes (1,177 m), as well as related geotechnical and hydrological work focused on the advancement of the Ashram Deposit.  The objectives of the program were to:

The summer’s program was successful in achieving all four of its objectives.  All drill holes were deliberately ended shortly below the base of the anticipated pit, with casing left in where practical to allow for easy access to deepen if required.  Most holes ended in strongly mineralized material, and thus, the ability to deepen if required will be important as the pit is optimized for position and throughput per day.

The three most northeasterly drill holes (EC13-093, 094, and 095) collared in mineralization, thereby extending mineralization further northeast than had been anticipated.  The presence of strongly mineralized material at surface in these locations indicates a lip or ‘fanning’ of the mineralized body near surface. As these holes were expected to collar in non-mineralized in-pit material, the mineralization encountered is anticipated to effectively lower the existing strip ratio as currently outlined in the Preliminary Economic Assessment (0.19:1, waste : mineralized material).   The deposit remains open to the north, south, at depth, and is not fully constrained to the east and west.

All drill core samples are en route to Activation Laboratories Ltd. of Ancaster, Ontario for analysis with results to be reported when received.

Phase I of the geotechnical and hydrogeological program for the project was comprised of thermistor installation in two holes, as well as, site specific soil documentation in order to evaluate stability parameters of the open-pit and infrastructure sites.  Hydrological work included falling head tests in several holes to evaluate ground water parameters and their potential influence on the open-pit.

Environmental work consisted of ongoing data collection from the weather station installed during Q1 of 2013, as well as, water sampling of various lakes/ponds in the area.

Metallurgical studies continue to advance at Hazen Research and UVR-FIA.  An update will be released once the next phases of tests have been completed.

Darren L. Smith, M.Sc., P.Geol., of Dahrouge Geological Consulting Ltd., a Qualified Person as defined by National Instrument 43-101, supervised the preparation of the technical information in this news release.

The Ashram Rare Earth Element Deposit is a carbonatite within the Eldor Property, located in north-eastern Quebec. The Deposit has a measured and indicated resource of 29.3 million tonnes at 1.90% TREO and an inferred resource of 219.8 million tonnes at 1.88% TREO. The deposit boasts a well-balanced distribution with enrichment in the light, middle and heavy rare earth elements including all five of the most critical elements (neodymium, europium, dysprosium, terbium, and yttrium).

The REEs at Ashram occur in simple and well-understood mineralogy, being primarily in the mineral monazite and to a lesser extent in bastnaesite and xenotime. These minerals dominate the currently known commercial extraction processes for rare earths.

A Preliminary Economic Assessment, completed in May 2012 by SGS-Geostat of Montreal (Blainville) outlines robust economics for the Ashram Deposit.  The PEA is based on a 4,000 tonne per day open-pit operation with an initial 25-year mine life (300 years at economic cut-off if open-pit + underground development), a pre-tax and pre-finance Net Present Value of $2.32 billion at a 10% discount rate, a pre-tax/pre-finance Internal Rate of Return of 44%, and a pre-tax/pre-finance payback period of 2.25 years.

The Company continues to advance the Ashram Deposit with ongoing metallurgical programs at both UVR-FIA and Hazen Research.

Commerce Resources Corp. is an exploration and development company with a particular focus on deposits of rare metals and rare earth elements. The Company is focused on the development of its Upper Fir Tantalum and Niobium Deposit in British Columbia and the Ashram Rare Earth Element Deposit in Quebec.