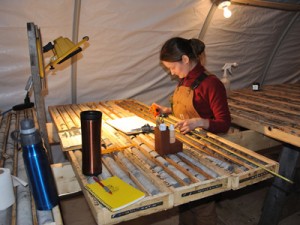 A six to eight week field program is anticipated to commence July 15, 2013, which will include 1,000 to 1,500 m of drilling targeted at the Ashram Rare Earth Deposit.  Drilling will focus on infill holes in order to increase the resource confidence from the current inferred category to the indicated and/or measured categories. The Deposit has currently a measured and indicated resource of 29.3 million tonnes at 1.90% TREO and an inferred resource of 219.8 million tonnes at 1.88% TREO. An indicated or measured resource category is required for all in-pit mineralized material in order to convert mineral resources to ore reserves as required for the ongoing Pre-feasibility Study.

Company President David Hodge states “We are fortunate to be in a position to move the project forward at this stage with cash on hand given the current markets.  There is solid room for optimization in all facets of this project and we are very excited about the de-risking we have completed and continue to achieve during our Pre-feasibility work.”

Programmed work will include required environmental and geotechnical programs as well as reclamation of several historic trench sites.  This work will complement the field program completed during February-March 2013 that included a small mammal survey as well as installation of a weather monitoring station.

As part of the PFS, a total of nine potential airstrip sites are being evaluated, including five located directly on the Eldor Property.  The weather station installed in Q1 2013 will monitor seasonal local climate fluctuations and, together with other local and regional data, will support the selection of a preferred airstrip location.  All prospective locations have been selected based on an ability to incorporate changes to the principal orientation as the weather and other data will be required for final site confirmation.  The site selected will also be amenable to future expansion if required.

The road route from the mine-site to a northern docking facility has been significantly optimized and improved from the initial route evaluated in the PEA.  Although the length cannot be finalized until an exact docking facility location is confirmed, the length has been reduced considerably by 25 km (from 185 km to 160 km) when compared to the PEA.  Further, the three crossings noted in the PEA (40 m, 50 m, and 60 m) have also been significantly reduced in size (22 m, 28 m, and 42 m) due to the newly optimized route.

Metallurgy continues to make significant advancements with mineral concentrate grades and recoveries continuing to improve. Additional details of the physical upgrading and hydrometallurgical program will be presented shortly in a forthcoming news release.

The Ashram Rare Earth Element Deposit is a carbonatite within the Eldor Property, located in north-eastern Quebec. The Deposit has a measured and indicated resource of 29.3 million tonnes at 1.90% TREO and an inferred resource of 219.8 million tonnes at 1.88% TREO. The deposit boasts a well-balanced distribution with enrichment in the light, middle and heavy rare earth elements including all five of the most critical elements (neodymium, europium, dysprosium, terbium, and yttrium).

The REEs at Ashram occur in simple and well-understood mineralogy, being primarily in the mineral monazite and to a lesser extent in bastnaesite and xenotime. These minerals dominate the currently known commercial extraction processes for rare earths.

A Preliminary Economic Assessment, completed in May 2012 by SGS-Geostat of Montreal (Blainville) outlines robust economics for the Ashram Deposit.  The PEA is based on a 4,000 tonne per day open-pit operation with an initial 25-year mine life (300 years at economic cut-off if open-pit + underground development), a pre-tax and pre-finance Net Present Value of $2.32 billion at a 10% discount rate, a pre-tax/pre-finance Internal Rate of Return of 44%, and a pre-tax/pre-finance payback period of 2.25 years.

The Company continues to advance the Ashram Deposit with the planned 2013 field program and with metallurgical programs at both UVR-FIA and Hazen Research.

Commerce Resources Corp. is an exploration and development company with a particular focus on deposits of rare metals and rare earth elements. The Company is focused on the development of its Upper Fir Tantalum and Niobium Deposit in British Columbia and the Ashram Rare Earth Element Deposit in Quebec.