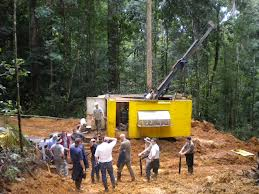 Columbus Gold Corp. (TSX VENTURE:CGT) is pleased to announce that it has commenced a US$11.8 million work program at its 5.37 million ounce inferred Montagne d’Or gold deposit at the Paul Isnard Project in French Guiana.

The 14 month program is being entirely funded by Nord Gold N.V., which can earn a 50.01% interest in Montagne d’Or and other licenses at Paul Isnard by spending a minimum of $30 million and completing a bankable feasibility study in a three year period.

Among other things, the program will include 27,600 meters of diamond core drilling anticipated to begin next week, detailed metallurgy, and baseline environmental studies, with the aim of completing a resource update and a preliminary economic assessment by the end of 2014.

The Phase II drill program is designed to complete a 50-meter spacing array to a vertical depth of 200 meters along the full strike extent of the current resources, with select 25-metre in-fill. The denser 25-metre to 50 meter drill pattern is expected to internally increase the resources between widely spaced holes, convert much of the inferred resource to the indicated and measured categories, and provide confidence in the grade-width distribution.

Based upon performance of earlier programs at Montagne d’Or, production of about 2,000 meters per month, utilizing a single drill rig on a 24 hour basis, is anticipated, however a second drill is presently being sourced and is anticipated to arrive in early 2014.

The Montagne d’Or gold deposit is estimated to contain NI 43-101 compliant inferred resources of 117.1 million tonnes grading 1.43 gpt gold for 5.37 million ounces gold using a 0.3 gpt cut off (58.1 million at 2.22 gpt for 4.15 M oz. gold using a 1.0 gpt cut off). The sulfide-gold mineralization is hosted within a 600-meter thick deformed and altered bimodal felsic-mafic volcano-sedimentary sequence and occurs in a series of east-west-striking, steeply south-dipping, parallel zones presently defined over a lateral distance of 2,250 meters and from surface to 200-250 meters vertical depth. The principal Upper Felsic and Lower Favorable mineral zones have an average thickness of 50 and 17.5 metres, respectively.