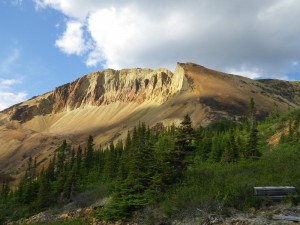 A total of 84 line km of detailed three dimensional Induced Polarization has been completed to date by Walcott and Associates over an area of 10 square km (2-3 km by 4.0 km). This completes coverage for a distance of over 2 km south of the discovery drillhole.

Colorado has also recently discovered a new I.P chargeability anomaly (greater than 20 mv/v) that is 1 km north of the discovery drillhole that is 500-800 m wide and 1300 m long and open to the north. I.P and ground magnetic surveying is now being conducted to the north to further delineate this new un-tested anomaly.

With the completion of the geophysical surveys to the south, the full extent of the Mabon chargeability high now measures more than 1300 m x 2000 m, and is cored by a continuous magnetic high with dimensions of 300-400 m wide x 1200 m long. The coincident chargeability and magnetic anomaly has only been drill tested on its far northern end over a 100 m x 300 m area and has demonstrated a very strong correlation with well mineralized copper-gold drill intercepts as previously reported.

Based on these highly encouraging geophysical results the Company is pleased to report that its board has approved a $2 million dollar, five thousand metre drill program to concentrate on the 300-400 m wide x 1200 m long magnetic anomaly. Geological crews are currently on site with the drilling program to start next week. These holes will be drilled utilizing the permitted 10 drill pad program (only 3 have been used to date). The Company has also applied for an expanded drill permit, allowing for a further 40 drill pads.

A 3D modeling and sectional interpretation has been posted to the company website (www. coloradoresources.com) with sections displaying strong magnetic highs up to 300 m widths and over 500 m depths. Some of the largest magnetic features occur up to 500 m southeast of discovery Drillhole NR13-001 and have not yet been tested by drilling.

Separate magnetic high features within the southern portion of the chargeability anomaly up to 200 m widths and 400 m lengths are also noted and remain untested. These magnetic anomalies have a strong correlation with new gold in soil anomalies (gold greater than 56 ppb) currently being compiled.

Adam Travis, the Company’s President and CEO stated, “We have been very busy over the last few weeks completing ground geophysical, geochemical and geological surveys in preparation for future drilling. We now have extensive technical data for the southern portion of our property in hand that will allow for an effective drill campaign to begin. Significant mineralized intercepts from Drillholes NR13-001, 003 and 004 correlate well with magnetic highs that occur over 1200 m lengths and up to 400 m widths and deeper than our surveys can detect at 500 m depths. Where we have intersected the magnetic high feature in 3 drillholes over 694 metres of cumulative lengths our average grade is 0.40 % copper and 0.60 g/t gold. To put that in context, the East and Main Zones at Imperial Metals new Red Chris Mine occurs in a 200-500 m wide by 1500 m long zone (301.5 mt of 0.36% copper and 0.27 g/t gold). We are also seeing other very prospective anomalies both to the north and south which indicate to me that we may also have the start of a mineralized trend not unlike the satellite zones at Red Chris.”