Chris Temple “WHAT WILL RESCUE THE SMALL MINERS/EXPLORERS?”

In the recent past, the Toronto Stock Exchange’s Venture exchange saw some of its lowest volume/action EVER. Even with precious metals coming up a bit this year, the sector is still in need of something to happen to get investors interested again. John Kaiser (a newsletter writer who  specializes in small, undiscovered resource companies) thinks it won’t happen until we get a new, HUGE mineral discovery some place that 1. makes obscene amounts of money for its owners and 2. shows that there is still some potential/life left in exploration. What do you foresee? You must think there’s some hope, or you wouldn’t have several speculative resource stocks on your list.

(Ed. note: This is a actually a larger question compiled from a few smaller ones.) First of all, I would never recommend owning/buying anything solely because it appears to be “cheap.” As is the case in a general sense with the small and even fledgling resource-oriented stocks as those listed on the TSX-V, it is not an exaggeration to say that these areas have seen full-fledged devastation over the last three years or so. The late Sir John Templeton used to say that it’s time to buy when there is “blood in the streets.” Warren Buffett says you should buy when others are fearful and sell when they are  greedy. Frank Giustra suggests that–at times like these of almost universal disfavor where small resource-related companies are concerned–you look for the best value/stories, make sure the necessary pieces are in place for the company to survive financially until better times come, and then “buy right and sit tight.” 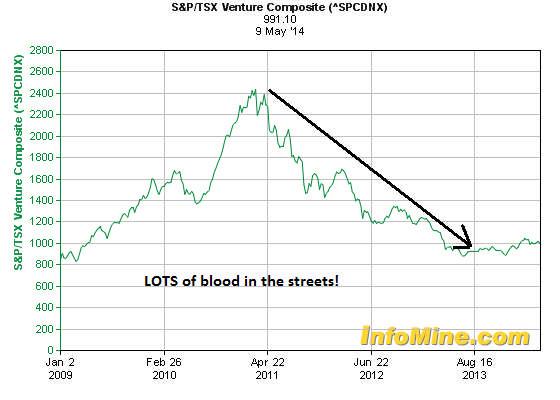 A good part of the trouble with the kind of stocks listed on the Venture exchange is that their beating since early 2011 occurred in an environment where the major stock market indices otherwise were much rising strongly. In much the same way as I have pointed out from time to time in regard to the gold price and its doldrums since peaking in the latter part of 2011, that has come about not so much because the long-term picture for gold is bad, but because the immediate gratification available to traders from stocks was a greater “draw.” So to an even greater extreme, lots of investors have simply washed their hands of many resource stocks all together, and the generally riskier ones found on the TSX-V in particular. Who wants this stuff when the major averages are hitting new highs?

What needs to change in order to build on the nascent recovery of the last several months?

* Central banks must keep things together. The worst thing that can happen for all the markets is for liquidity to suddenly dry up. By and large, if you are a “gold bug” specifically or like resources generally, you DON’T want to be rooting for some kind of collapse or crisis. Instead, you would want more of the same as we have had: central banks managing to at least keep everything afloat as they run the printing presses. Eventually, in such a scenario, we will end up back in the kind of environment we had in the late 1970s, where raw materials, energy, precious metals and the like got a disproportionately large share of investors’ affections as they were the only remaining places where purchasing power could be preserved.

If central banks can’t keep all the balls in the air and we do have yet another deflationary plunge in asset prices first, that won’t mean that the long-term picture has changed. But it will mean that it will take a lot longer to play out, and that makes it even more vital that we only be in companies that have the support and funding to ride out even more of the kind of environment we’ve seen over the last few years if it comes to that.

* Investors absent from these stocks must have a reason to go back to them which appeals to their greed, and overcomes their lingering fears. Here, John Kaiser’s point is very well taken. Legions of investors in the recent past were buying the newer crop of momentum stocks for little reason other than that they were going up, and that they didn’t want to miss the fun. The same thing has happened in the past in the resource space–and will again. Investors will be unable to ignore it if stories start cropping up of people who made 10, 20 or even 100 times their money buying shares of a company that hit it big.

* There must be evidence that serious, experienced money is involved. By this, I mean that money managers are recognizing the incredible value (normally, where specific companies/areas are concerned) where it legitimately exists. I am one who would not be at all surprised if we hear of bankruptcies on the part of fledgling resource companies continuing for a while still. Frankly, many of them should not be in business to begin with. The fact that the markets have decided to paint everyone with the same brush for the most part otherwise means that worthy companies are trading for peanuts like a lot of the unworthy ones. Our job is to find the former!

On this score, even as the traditional investment banks and big brokerage firms pretty much remain AWOL, it’s heartening that private equity firms have been showing a lot of interest recently. And some companies that most deserve it are able to raise money.

* Merger, acquisition and related activity must increase, to recapture some attention. To the extent that the financial media covers these things very much at all, there was some time spent recently on the latest failed negotiations between mining giants Barrick Gold (NYSE-ABX) and Newmont Mining (NYSE-NEM.) This was not the first time that the two were unable to come up with satisfactory marriage terms; yet some with little more motivation than to be in agreement with the current gold-negative consensus pointed to the failed negotiations as one more “proof” that the sector is not worth anybody’s time or attention.

In contrast, relatively little was heard in some of these same places about the recent bidding war for Osisko Mining (TSE-OSK; OTC-OSKFF.) In the end, Agnico Eagle and Yamana Gold (NYSE-AUY) outbid Goldcorp (NYSE-GG) in their quest to purchase the majority of the company’s assets, most notably those in the resurgent Val d’Or–Noranda camp in Quebec. Osisko shareholders are very happy, and a lot wealthier. At least where this play is concerned, the industry was willing to put its money where its mouth is, and bid up for prized–and cheap–assets. The more that things like this continue to happen, the less they will be able to be ignored.

And where that area of Quebec is concerned, there appears to be underway a resurgence of activity and interest even beyond the Osisko buyout battle. And this serves as a foundation of the two new stories/opportunities among speculative companies I am recommending next week.