Chris Temple “IS THE FINAL TOP IN?” 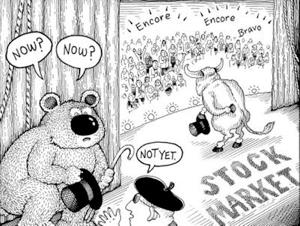 As far as calling a “top” in the sense of a hard number for the Dow, S&P or whatever, anyone would be foolish to do that. But what I have been saying for all of 2014 is that the market generally is topping out, and because, in my view, the narrative that carried it in 2013 was changing. And it’s changing to a slower growth, continued low-interest rate world for a while.

So my “call” on the markets is as it has been for a few months now. I’m less worried about what number the averages are at than I am about being in the right places ahead of the crowds getting chased out of the momentum plays of last year.

I had to chuckle when listening to Fed chair Janet Yellen’s testimony this week to Congress’s Joint Economic Committee. While saying that–generally speaking–she is not aware of bubbles anywhere, she did nevertheless suggest that valuations were a bit stretched in “some” small-cap stocks and, perhaps, areas of the so-called junk bond market. This take of hers on my “Great Rotation” theme is one reason why we have recently seen the Russell 2000 small-cap index close below its 200-day moving average for the first time in a year and a half, while the Dow Jones Industrials have managed to eke out a new all-time closing high, with the S&P 500 not far behind.

The $64,000 question (more or less, depending on the size of your portfolio!) is whether the May 13, 2014 2 www.nationalinvestor.com recently-bloodied small-cap and various momentum stocks will succeed in pulling everything else down, or continued overall liquidity will limit their losses as the Dow and S&P 500 hold them up to some extent. By rights, everything is overdue for a bona fide correction. My gut, therefore, tells me that shortterm traders perhaps could still be shorting isolated segments of the market that are the weakest. However, my head tells me that when a great many stocks recently have dropped from 50 to 80% in value yet the Dow and S&P remain near their highs, we are more likely to see the major averages hold up.

At last week’s end, the Russell 2000 Index, as you see here, traded down to its correction low from early in the year but then bounced higher. 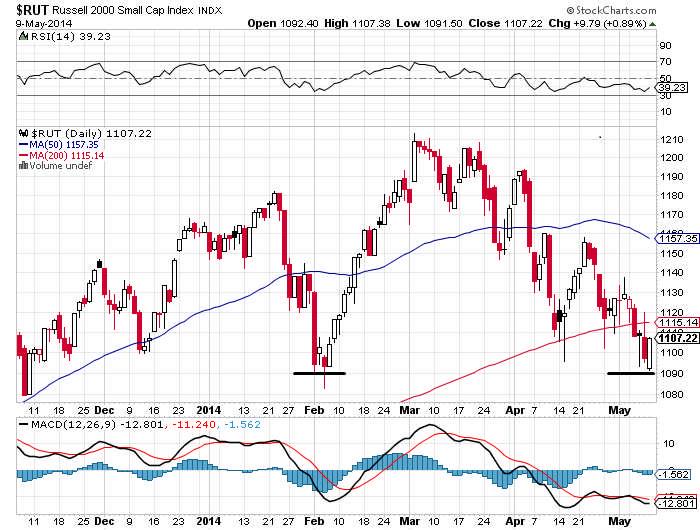 The answer to the stalemate between these market sectors will likely involve whether or not the 1090 area on this chart holds. If it does not, more momentum selling is likely to ensue which would spread to the overall stock market. So at this point, any decision to short parts of the stock market as far as I’m concerned must wait, at least, until that plays out (or doesn’t.) As you know, in talking about my “Great Rotation” theme for some time now, I have expected pretty much the kind of behavior we’ve seen so far this year. The last 4+ months have indeed followed the pattern of what we saw back in the 2000-2002 time frame, where investors rolled out of momentum plays and straight-out overpriced garbage and into companies that represented real value; many of which were just as absurdly undervalued. I expect this pattern to continue for some time; thus, my focus remains primarily on finding more of the kinds of companies that will outperform the market as this rotation goes on, and even go up further if the overall market does decline more than I presently expect.

But especially for those of you who think you want to be aggressively shorting stocks, please keep in mind two big differences between this time around and the popping of the tech bubble in 2000. It was much easier for me to call the overall market top back then, because the factors that had driven stocks higher prior to that had VERY clearly changed. Most notably, then-Fed Chairman Alan Greenspan did a “180” with monetary policy. After pushing down interest rates and flooding the economy with money prior, he started raising rates and withdrawing all that liquidity in 2000. Second, remember that much of the world had piled into U.S. markets in 1999 as a safe parking place for their money in case the financial systems in their country blew a gasket because of the so-called Y2K computer bug. Once that worry was past these folks started withdrawing their money from our markets. So that double blow to the liquidity equation sufficiently changed the underlying narrative and environment so as to cause the prolonged nasty correction that ensued.

This time around, neither of these things is an issue. Though the Fed indeed is tightening in one sense with its reduction to its Q.E. program, this has been more than made up for by the mountains of shorter-term liquidity facilities it has previously made available; ones which, as I’ve previously explained, May 13, 2014 3 www.nationalinvestor.com have enabled “Belgium” and others to shovel money into Treasuries. Further, with the likelihood that long-term interest rates will continue falling, this should also keep some equilibrium in the stock market.

As for the issue of foreign money, we likely won’t see that negative aspect as occurred in 2000.

Indeed, we are more likely in the near term to see increasing demand for U.S. financial assets as—among other things–fears over Europe, China’s growth (or lack thereof) Ukraine and the rest reinforce money managers’ inclinations to be in only the relatively safer and more liquid markets.