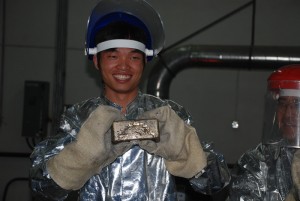 China Gold International Resources Corp. Ltd. (TSX:CGG) (HKEx:2099) is pleased to announce that on July 17, 2014, the Company, through its wholly-owned subsidiary, Skyland Mining (BVI) Limited and with the assistance of Joint Lead Managers as defined in the previous news release dated July 10, 2014, has successfully completed the issuance of bonds in an aggregate principal amount of US$500 million.

Referring to the previous news release dated July 10, 2014, the Company informs that all the conditions precedent to the issue of the Bonds as set out in the Subscription Agreement have been satisfied. The Bonds are expected to be listed on The Stock Exchange of Hong Kong Limited on July 18, 2014.

The Bonds were issued at a price of 99.634%, bearing a coupon of 3.50% per annum with a maturity date of July 17, 2017 and were rated BBB- by Standard & Poor’s. The Bonds are unconditionally and irrevocably guaranteed by the Company. The net proceeds of the Offer will be used for working capital, capital expenditures and general corporate purposes of the Company.

Mr. Bing Liu, CEO of the Company, noted that the transaction was noteworthy on several accounts. Mr. Liu said “This issue was the first US dollar denominated bond issue supported by a company’s credit rating outside of China in the history of the gold companies in Asia Pacific Region. The financing costs were significantly lower than the industry standard. The Offer was nearly 15 times oversubscribed. The Offer generated the highest percentage of subscription by European investors compared to other recent Chinese corporate bond issues. We set a benchmark in the international capital markets for others to follow.”

China Gold International Resources Corp. Ltd. is based in Vancouver, BC, Canada and operates both profitable and growing mines, the CSH Gold Mine in Inner Mongolia, and the Jiama Copper-Gold Polymetallic Mine in Tibet Autonomous Region of the People’s Republic of China. The Company’s objective is to continue to build shareholder value by growing production at its current mining operations, expanding its resource base, and aggressively acquiring and developing new projects internationally.