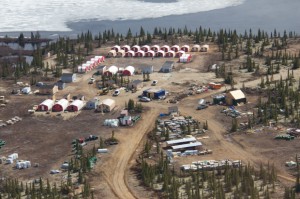 CHAMPION IRON MINES LIMITED (TSX:CHM)(OTCQX:CPMNF)(FRANKFURT:P02) is pleased to announce that it has completed a private placement financing with Baotou Chen Hua Investments Limited a corporation, based in Hong Kong, for the acquisition by Baotou of 15,000,000 Units at a subscription price of $0.20 per Unit for aggregate proceeds of $3,000,000 . Baotou is a Hong Kong investment company the principal of which is a mining entrepreneur with substantial interests in Chinese iron ore and rare earth deposits.

Each Unit consists of one common share and one common share purchase warrant with each whole Warrant exercisable for one common share at a price of $0.25 per share for a period of 24 months from closing. All securities acquired pursuant to this Transaction will be subject to a four (4) month hold period. Champion has agreed to pay an 8% cash commission, in the aggregate, to an arm’s length finder. With the closing of the Transaction Champion’s cash position is approximately C$16 million.

Baotou became interested in Champion as it has advanced its Consolidated Fire Lake North Project into a large iron resource and recognized the Company’s success and excellent pre-feasibility study results. From various discussions held with Baotou’s representatives, management of Champion is confident that Baotou and its principals and affiliates have the potential to provide Champion with access to multiple end-users of iron ore in China and to Chinese companies that have a strong interest in participating in financing Champion’s short-term endeavours as well as providing strategic relationships which will assist Champion in its long-term objectives. Baotou’s industrial and financial contacts within China are substantial and, with Baotou’s initial investment in Champion now completed, Baotou’s interest is aligned with that of management. Champion will be the beneficiary of Baotou providing as much assistance to Champion as possible with the introduction of its business network to the Company.

Tom Larsen, President and CEO of Champion said, “We are very pleased and encouraged with this strategic investment from Baotou, whose experience and network in China will be instrumental in Champion’s search for a project partner for our 100%-owned Consolidated Fire Lake North Project. Baotou’s investment in Champion reaffirms the value of Consolidated Fire Lake North and the marketability of its concentrate product and is the first step in growing Champion’s presence with Chinese investors. It also sets the stage for our expanded discussions with Asian steel producers that are seeking lower risk and direct sources of iron ore.”

The proceeds of the transaction will be used to continue the feasibility study and technical work in connection with the development of the Consolidated Fire Lake North Project in the Fermont Iron Ore District, Quebec.

Champion is an iron exploration and development company with offices in Montreal and Toronto, and is focused on developing its significant iron resources in the provinces of Quebec and Newfoundland & Labrador. Champion holds a 100% interest in the Fermont Iron Holdings located in Quebec and a 44% interest in the Attikamagen Iron Project located in both Quebec and Labrador. The Attikamagen Project is under option to Labec Century Iron Ore Inc. (“Labec”), a subsidiary of Century Iron Mines Corporation, under which Labec can earn up to a 60% interest. Labec has requested a transfer of a further 4% to increase Labec’s holding to 60% under its option agreement with Champion and to further increase Labec’s interest and dilute Champion’s interest pursuant to ongoing exploration programs. Champion is undertaking its due diligence investigations with respect to the requests.