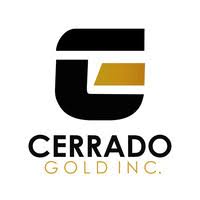 CERRADO GOLD (TSX-V: CERT) is pleased to announce the results of a further seven drill holes from its 12,000-metre exploration drill program at the Baritina target, at its Minera Don Nicolás Project located in Santa Cruz province, Argentina. The focus for the current 12,000-metre exploration program is to delineate new, high grade, near surface mineralization that can be brought into the production schedule in the near term. Results highlighted in this release are from seven drill holes, PA-D21-43 thru 49. Cerrado has completed 2,989 metres as of drilling to March 24. Additional drill results will be announced for Baritina, Chulengo and other high priority targets as assays are made available over the next few months.

The current exploration drill program at the Minera Don Nicolás Project commenced on February 5th at the Baritina target, within the Paula-Andrea Prospect (Figure 1). The drill results reported in this press release were received March 21st, 2021 and represent complete results for holes PA-D21-43 thru 49, which are the next seven of nine holes (PA-D21-42 thru 50) totaling 1,068 metres completed at Baritina (see Figure 2). All eight drill holes intersected typical alteration zones associated with high level epithermal mineralization, including abundant silicification, clay alteration, hematite, jarosite and sulphides.

The new drill holes and the review of all the past work at Baritina target has resulted in a new interpretation of the presence of a subvertical and subcircular “diatreme or phreatic” breccia. This is the first time the diatreme or breccia model has been considered. The breccia zone is related to the mineralized structures but not all the breccias are mineralized. The high-grade mineralization is restricted to some sectors i.e., faults and/or feeder vents. Also, the mineralization cut across lithologies with no important layers. Further structural analysis and modeling is being conducted to optimize understanding of which structures are mineralized and their orientation in order to further drill test this target. It is possible there may be another orientation for the mineralizing structure.

Also, attached is a cross section of the mineralization (Figure 3). The assay results for the remaining hole at Baritina (PA-D21-50) are pending as are the next holes and trench results from the Chulengo prospect which will be released over the coming weeks as they become available. The drill rig continues drilling in the Chulengo area, 300 metres south and east, also a part of the Paula Andrea prospect. The current exploration drill program is expected to test numerous near mine and brownfield targets over the course of the next few months and is on track for completion by the end of June 2021. 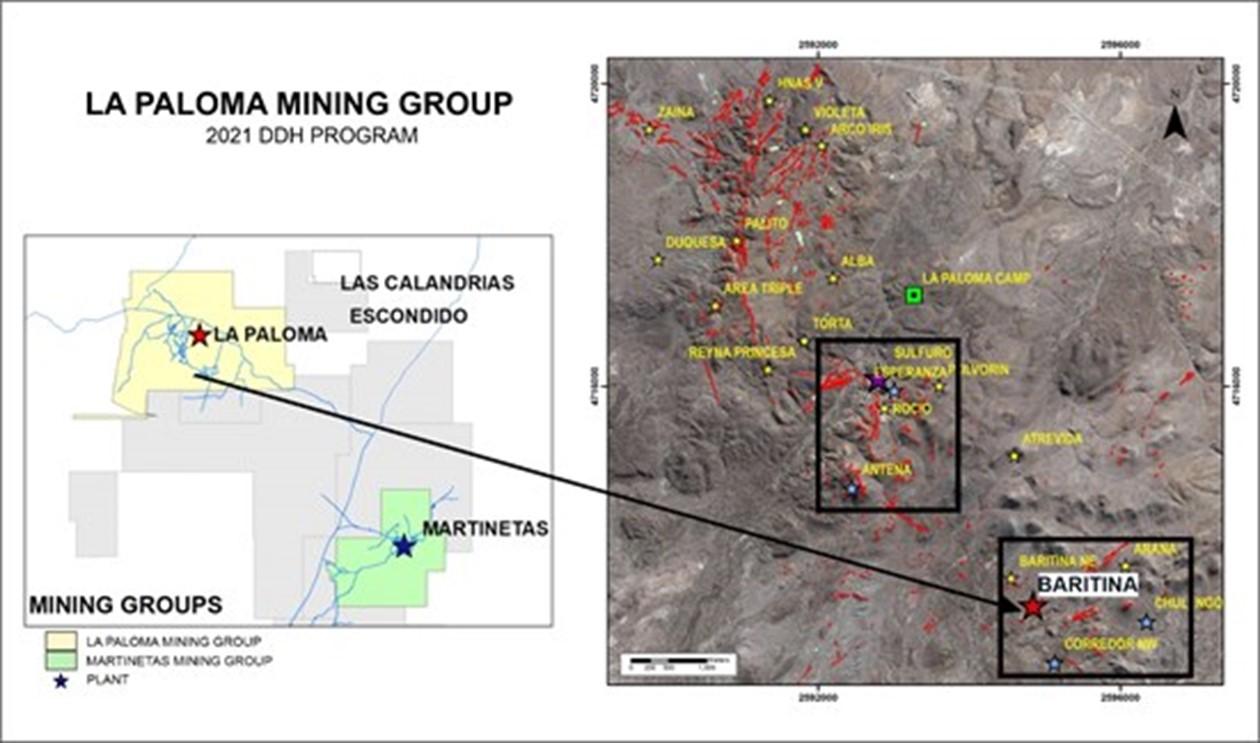 Current drill results will be added to the database of previous drilling at Baritina which includes 13 reverse-circulation and 5 diamond drill holes, which were used to target the new drilling program and will help further define this target. Assay data from previous drilling are considered non-compliant and would not be used for resource estimation. 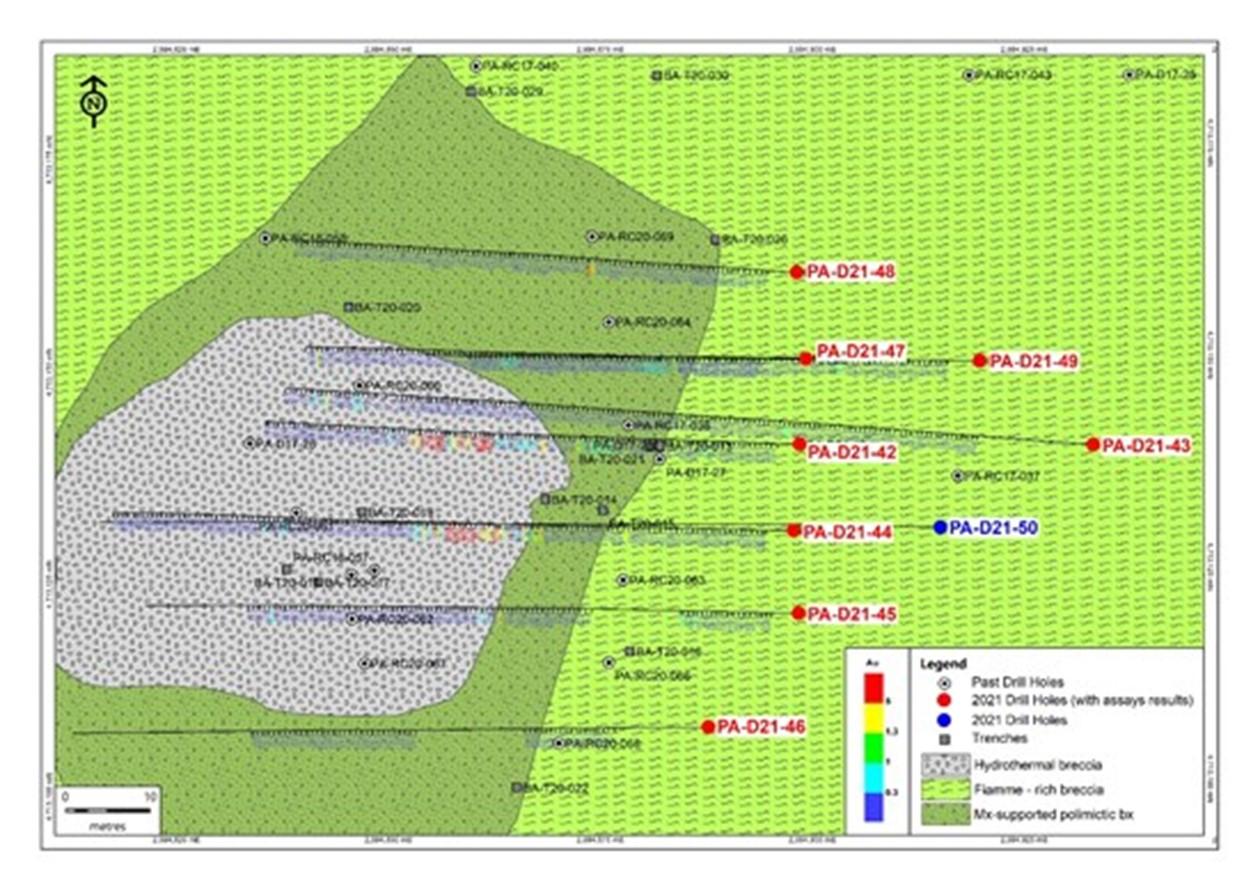 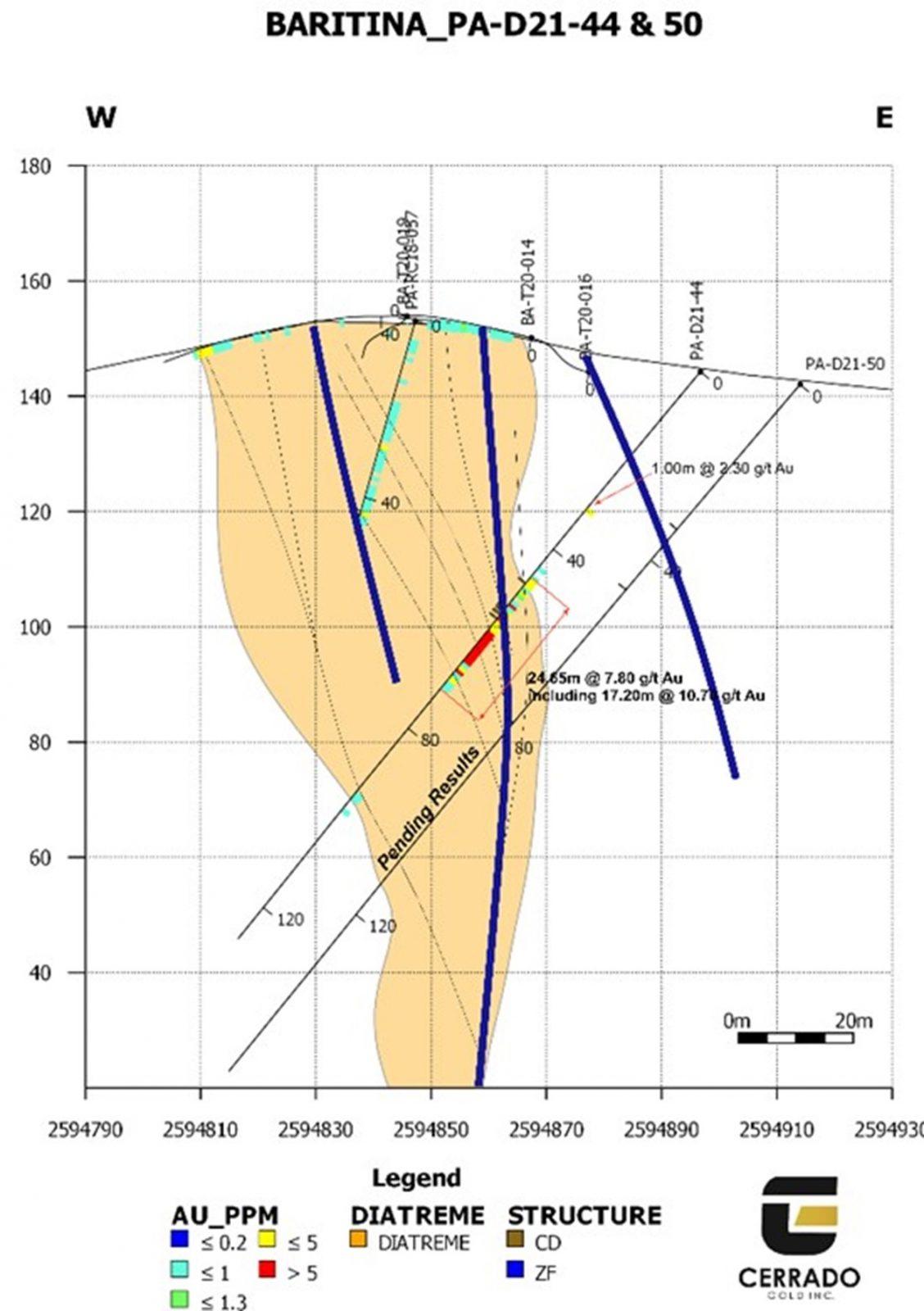 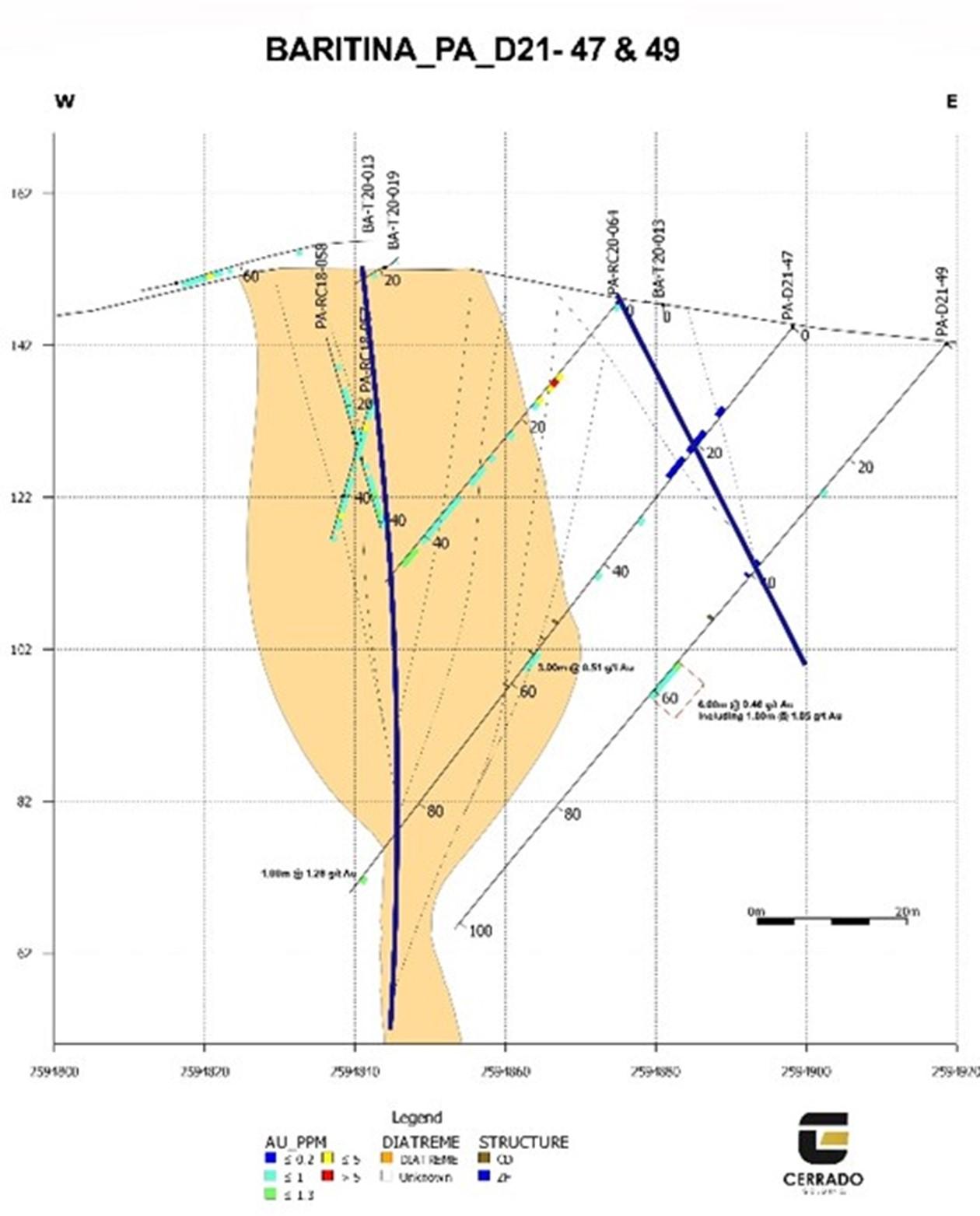 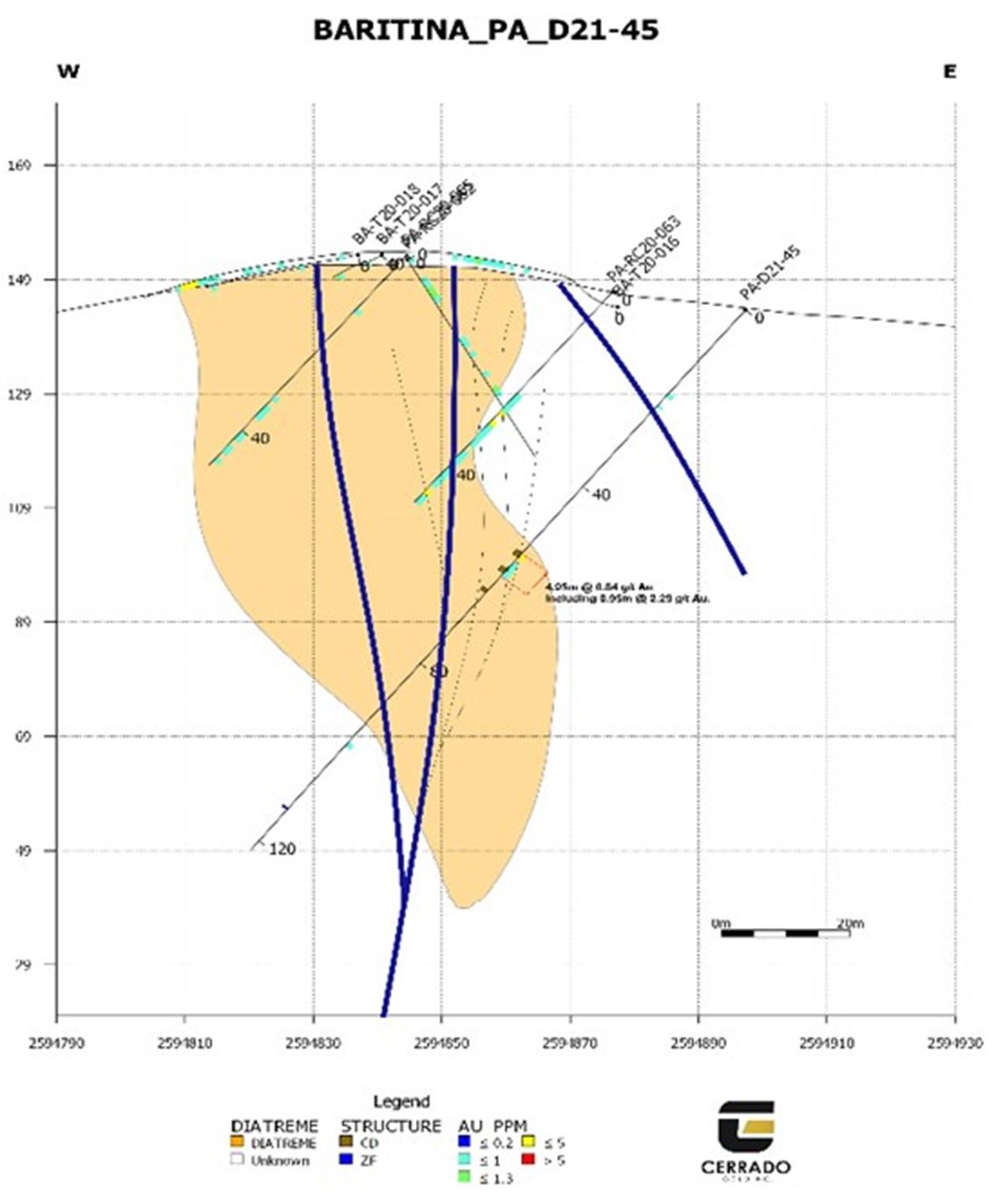 Figure 3: Baritina Cross-sections of PA-D21-42 thru 50 with the geology and current interpreted extent of the mineralisation

Current Near Mine Drill Program at MDN

The near mine exploration program at Minera Don Nicolas is comprised of 12,000 metres of diamond drilling. This program will consist mainly of step-out and downdip drilling to target extensions of gold mineralization and a modest amount of infill drilling to upgrade resources. The primary areas of focus for the program will be to build on the numerous exploration targets that have been defined by limited historical drilling, such as the Esperanza and Paula Andrea (Baritina, Chulengo, Ariana, Carcol targets) Prospect (see Figure 3), and upgrade these to NI 43-101 compliant status. Given that these targets are close to the current, high grade, La Paloma mining area they are high priority in order to potentially add new resources. The current program is in addition to RC drilling undertaken by the mine for infill and grade control to extend the current mining areas of La Paloma and Martinetas both along strike and at depth.

Mark Brennan, CEO & Co-Chairman commented, “We are pleased the ongoing drill program continues to define the Bartina target as a potential source of additional near surface, high-grade material and fully expect the ongoing program to highlight the significant near surface potential that remains at Minera Don Nicolas to enhance the current open pit mine life. Following the evaluation of these first-round assays, we expect to drill follow up holes at Baritina.” He continued, “We look forward to continuing the exploration program to increase the overall resource with improved grade and greater overall tonnes that will continue to add value at Minera Don Nicholas.”

Analytical work was carried out Alex Stewart international, Argentina S.A. Labs (ASI). The facilities of the prep lab and assay lab are located in San Julian, 184 Km from MDN mine operations. MDN sends out 10% of samples to check at ALS international labs (ALS) with the prep lab located in Mendoza and assay labs in Lima, Peru and Vancouver, Canada. In the main laboratory ASI (Mendoza), the samples are systematically analyzed for gold (ppm) and silver (ppm) by fire assay (Au4-50 + AgICP-AR-39) regarding the over limits with fire assay results greater than 10 ppm, a second assay is applied including gravimetric finishing (FA50GRAV), with respect to silver, analyzes greater than 200ppm are carried out by Ag-FA50GRAV

The scientific and technical information in this press release has been reviewed and approved by Robert Campbell, P.Geo., Vice President, Exploration for Cerrado Gold Inc., who is a Qualified Person as defined in National Instrument 43-101.

Minera Don Nicolás is located 1,625km south west of Buenos Aires, Argentina in the Deseado Massif region in the mining-friendly province of Santa Cruz. The project is comprised of several exploration concessions totaling 333,400 ha. The largest regional centre is Comodoro Rivadavia, which provides logistical and other support for the operations.

MDN Project is situated within the world renowned Deseado Massif where the underlying geology of the region is dominated by rhyolitic and andesitic volcanic and tuffaceous volcaniclastic lithologies of Middle to Upper Jurassic age (130 to 170 ma). It is criss-crossed by numerous extensive fault and fracture zones, which served as conduits for hydrothermal activity during periods of Jurassic volcanism. The result of this activity is a widespread network of shallow level mineralized “epithermal” fissure veins, breccias, and stock-work systems, many of which carry potentially economic Au and Ag mineralization. The Deseado Massif region is host to several epithermal gold-silver deposits and several multi-million-ounce gold deposits, including Cerro Vanguardia (Anglo Gold), Cerro Negro (Newmont GoldCorp), Cerro Morro (Yamana).

Cerrado acquired the MDN Project property in March 2020 and undertook a fundamental review of the resource database and based upon a significant geological re-interpretation, engaged SRK to conduct an independent NI43-101 updated resource technical report (August 2020) which is available on the Cerrado Gold website and SEDAR.