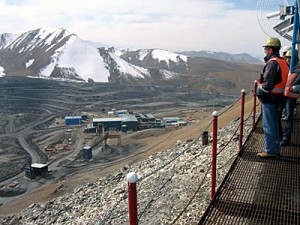 Centerra Gold Inc. (TSX: CG) announced that the Mongolian Parliament has passed a resolution setting the state ownership interest in the Gatsuurt Project at 34% and authorizing the government to complete negotiations with Centerra on the terms of such ownership. In October 2015, the Company and the Government agreed to a 3% special royalty in place of the state 34% ownership interest in the project (such royalty being in addition to the existing Mongolian mineral royalty and tax regime). Based on our discussions with the Government, Centerra understands that the resolution is a mandate to the Government to implement such agreement between Centerra and the Government.

Scott Perry, Centerra’s Chief Executive Officer stated, “The parliamentary resolution is a very important next step in advancing the Gatsuurt Project. The Gatsuurt Project represents an exciting opportunity to use Centerra’s existing Boroo mill and other infrastructure to develop the 1.6 million ounce Gatsuurt deposit with very modest initial capital investment. The Company will now focus on finalizing the investment agreements with the Government of Mongolia. We look forward to developing Gatsuurt so we can continue to operate in Mongolia for many more years to come.”

The Company expects to proceed with negotiating definitive agreements (including a deposit development agreement and an investment agreement) with the Mongolian Government. Following the successful completion of such agreements, the Company will undertake economic and technical studies to update the existing studies on the project, which were completed and published in May 2006. As part of such work, the Company will undertake a program of exploration drilling, aimed at substantially expanding the Gatsuurt oxide resource, and additional hydrogeological drilling. Following completion of definitive agreements the Company expects to provide an update on the timeline for completion of such studies and drilling and for the start of project development.

The Gatsuurt Project is located approximately 55 kilometres by road from the Company’s Boroo mine and is expected to be developed in accordance with applicable Mongolian environmental regulations and international standards, consistent with the standards adopted by the Boroo mine. The Gatsuurt Project’s estimated mineral reserves as at December 31, 2014 were 17.1 million tonnes at an average grade of 2.9 grams of gold per tonne containing 1.6 million ounces of gold using a cut-off grade of 1.4 grams per tonne. Mineral reserves have been estimated based on a gold price of US$1,300 per ounce. For further information, please refer to Centerra’s 2014 Annual Information Form dated March 31, 2015.

Centerra is a Canadian-based gold mining company focused on operating, developing, exploring and acquiring gold properties in Asia, North America and other markets worldwide. Centerra is the largest Western-based gold producer in Central Asia.  The Company is headquartered in Toronto, Ontario, Canada.