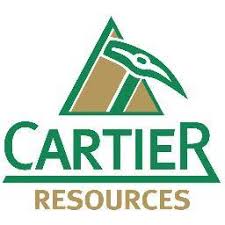 Cartier Resources Inc. (TSX-V:ECR) is pleased to announce that it has intersected 8.5 g/t Au over 3.5 m, 205 m beneath the deepest stope at the former Chimo Mine, located 45 km east of Val-d’Or.  These new results were intersected at a depth of 1,050 m along the depth extensions of gold-bearing zones 5 which produced 2/3 of the ounces mined.  The intersection is the first from an 8,000-m deep drilling program which is part of the ongoing 34,000-m drill program on the property. 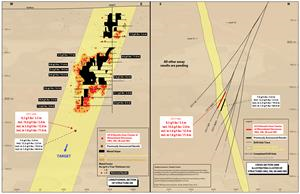 The drill hole was completed using control directional drilling and was designed to cut several gold-bearing zones and to explore the potential depth extensions of the gold zones below past-producing stopes.

Lengths are expressed along drill core axis.  The true thickness was not determined.

« These new results indicate that the continuity of grades and widths at depths of greater than 1,000 m, associated with a broad alteration and mineralization system may generate a resource development potential» commented Philippe Cloutier, President and CEO of Cartier.

The reader should view the 3D VIDEO, available on Cartier’s website.  The 3D video helps visualize the different gold-bearing structures on the Chimo Mine property as well as key components that are the mine infrastructures, the gold-bearing zones, the gold intersection areas left unmined as well as the 281 targets of the ongoing drill program.  The 5M2, 5M, 5B and 5BS Mineralized Structures are presented in the video.

The gold-bearing intersections are characterized with biotite-chlorite alteration and mineralization consisting of visible gold grains, arsenopyrite and/or pyrrhotite mineralization, smoky and/or white quartz veining.  All other assay results from the four drills active on the property are still pending.

The Board of Directors has, by resolution, approved an amendment to the stock option plan of the Corporation in accordance with the provisions of Policy 4.4 of the TSX Venture Exchange. The amendment is subject to the approval of shareholders at the next annual meeting of shareholders. Pursuant to said amendment, the Corporation has added a clause allowing the extension of the exercise period of any stock option that expires during a blackout period or within 10 days following the end of such period.

Cartier Resources was founded in 2006 and is based out of Val d’Or, Quebec. Quebec has consistently ranked high as one of the best mining jurisdictions in the world primarily based on its mineral rich geology, attractive tax environment, and pro-mining government.  In 2017, the Fraser Institute again ranked Quebec as one of the best jurisdiction in the world for investment attractiveness.

All lengths, mentioned in this press release, were measured along the drill core. The NQ core samples are crushed up to 80% passing 8 mesh sieves and then pulverized up to 90% passing a 200-mesh sieve. Cartier inserts 5% of the number of samples in the form of certified standards and another 5% in the form of sterile samples to ensure quality control. The samples are analyzed at the Techni-Lab laboratory (Actlabs), located in Ste-Germaine-Boulé, Quebec. The 50 g pulps are analyzed by fire assay and atomic absorption. For samples containing visible gold, 1000 g of rock are directly analyzed by the “Metallic Sieve” method.

The scientific and/or technical information presented in this press release has been reviewed and approved by Mr. Gaétan Lavallière, P. Geo., Ph. D. and Vice President for Cartier Resources.  Mr. Lavallière is a qualified person as defined by National Instrument 43-101.