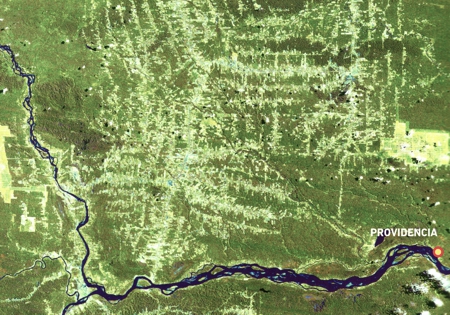 Capstone Mining Corp. (TSX: CS) is pleased to announce that it has entered into an option agreement with Sociedad Química y Minera de Chile S.A to earn up to 70% of a property, Project Providencia. The initial option is on 350,000 hectares (3,500 square kilometres) in Chile’s II Region and would be reduced overtime to a maximum of 50,000 hectares if a joint venture is formed.

The Property is located 50 kilometres east of the city of Taltal, approximately half way between Capstone’s Santo Domingo Project and Anglo American’s Mantos Blancos copper mine. It rests at a mean elevation of 1,800 metres above sea level, with mostly gentle topography and it benefits from the Pan-American Highway cutting through the centre of the block.

Due to the unique nature of SQM’s core business as a producer of specialty fertilizers and inorganic industrial chemicals, significant portions of the large Property in the Cretaceous belt have been exclusively held by SQM for decades for the value of their surface deposits of nitrates and iodine, among other minerals. The Property has seen little to no modern exploration for bedrock hosted, metallic mineral deposits, or even comprehensive geological mapping, prospecting and geophysical surveying, despite being centrally located in one of the world’s largest copper mining districts. Capstone’s strategy will be to cover the very large holding with several state-of-the-art airborne, remote sensing technologies to identify discrete anomalies or areas of prospectively for more detailed ground follow-up.

“Capstone’s strategic goal is to expand its asset base and selectively add to our portfolio of exploration projects in the Americas,” said Brad Mercer, Sr. Vice President, Exploration of Capstone. “This is an excellent opportunity to look at a very large under-explored land package in the world’s most prolific copper jurisdiction, with an option to make a more significant investment in stages if exploration results warrant. The proximity to Capstone’s Santo Domingo Project and other copper mines offers potential synergies should exploration prove successful. ”

“Capstone geologists believe that the property is prospective for a variety of styles of mineralization, including iron oxide-copper-gold (“IOCG”), porphyry copper and Mantos Blancos type. Activities will be led by our Chilean geology team who were instrumental in the discovery of Santo Domingo IOCG deposit,” he added.

Capstone has paid SQM US$1million upon signing and will immediately commission a high resolution, combined magnetic and radiometric airborne survey over the block. Both surveys will be useful in providing a basic geological framework from which to start exploration but the magnetic survey will be particularly useful in identifying anomalies of interest since the principal target is a magnetite rich IOCG deposit, similar to Santo Domingo.

Capstone will be the operator of the project and may earn up to a 70% interest in the Property over 7.5 years in incremental steps by spending on exploration and land holding costs. There are three options that may be exercised at Capstone’s sole discretion. At any time during the term of the agreement, Capstone has the right to withdraw from the project, whereby the agreement will terminate and management of the project will return to SQM.

Capstone Mining Corp. is a Canadian base metals mining company, committed to the responsible development of our assets and the environments in which we operate. We are preferentially focused on copper, with two producing copper mines, the Cozamin copper-silver-zinc-lead mine located in Zacatecas State, Mexico and the Minto copper-gold-silver mine in Yukon, Canada. In addition, Capstone has two development projects, the large scale 70% owned Santo Domingo copper-iron-gold project in Chile in partnership with Korea Resources Corporation and the 100% owned Kutcho copper-zinc-gold-silver project in British Columbia, as well as exploration properties in Canada, Chile, Mexico and Australia. Using our cash flow and strong balance sheet as a springboard, Capstone aims to grow with continued mineral resource and reserve expansions, exploration, and through acquisitions in politically stable, mining-friendly regions. Our headquarters are in Vancouver, Canada and we are listed on the TSX.