Capstone Mining Corp. (TSX:CS) announces high grade copper and silver results from 103 infill and step-out drill holes at its Cozamin Mine, as well as an expansion to the exploration program into 2020. The results represent half of the 200 hole program, which aims to more than double the current reserve base. Results to date support the Company’s recently disclosed increase to Cozamin’s annual production guidance to 50 to 55 million pounds of copper and 1.4 to 1.5 million ounces of silver starting in early 2021. Mineral Resources and Mineral Reserves estimates will be updated in late 2020.

“Highlight holes in Figure 1 and Table 1, are comprised of both infill and step-outs. They have shown excellent grade and thickness, including a test into the middle of the recently acquired Portree claimblock (U499),” said Brad Mercer, Capstone’s Senior Vice President of Operations and Exploration. “We now see a much larger target and we intend to infill drill the expanded area before re-estimating mineral reserves. On average, the vein is approximately 60% wider up dip from the current reserve, while the copper and silver grades are higher as well. Additionally, having access to the Portree claimblock will give us a platform to extend mineralization to the west.” 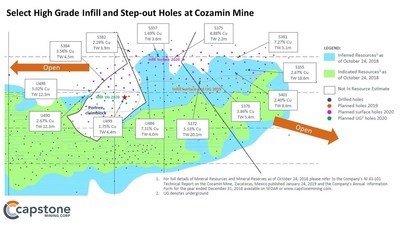 “Capstone has owned and operated Cozamin for 15 years and never have I been this excited about its future,” said Darren Pylot, Capstone’s President and CEO. “The continued exploration success achieved by our team is a paradigm shift for an already low cost and highly profitable tier one mine. I don’t know of another project that can leverage 50% organic production growth with expansionary capital of less than $5 million dollars. Cozamin has delivered cumulative free cash flow of over $400 million for Capstone and with our plan to more than double the current mine life, it is incredible to think that over the next decade the best is yet to come.”

The best grade*thickness intercepts at Cozamin lie outside of the current Mineral Reserve, some of which are step-out holes beyond the previous Mineral Resource estimate.

The strong positive correlation between copper and silver grades is clear when comparing Figure 2 to Figure 1. 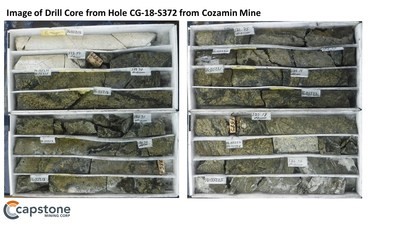 All samples were submitted for preparation by ALS at its facilities in Zacatecas, Mexico, followed by analysis at the ALS Laboratory in North Vancouver, Canada. The entire sample is crushed to a minimum of 70% passing 2 millimetres. A 250g subsample of the crushed material is then pulverized to 85% passing 75 microns. Copper, zinc, lead and silver are determined by ICP analysis after 4 acid digestion of a 0.4g subsample of pulverized material. QAQC samples in each batch of 20 samples include a blank, a certified reference material and a duplicate (one of a field, coarse reject or pulp reject).

Capstone Mining Corp. is a Canadian base metals mining company, focused on copper. Our two producing mines are the Pinto Valley copper mine located in Arizona, US and the Cozamin copper-silver mine in Zacatecas State, Mexico. In addition, Capstone has the large scale 70% owned copper-iron Santo Domingo development project in Region III, Chile, in partnership with Korea Resources Corporation, as well as a portfolio of exploration properties. Capstone’s strategy is to focus on the optimization of operations and assets in politically stable, mining-friendly regions, centred in the Americas. We are committed to the responsible development of our assets and the environments in which we operate.