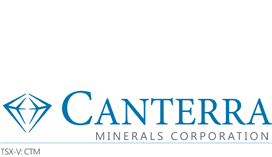 Canterra Minerals Corporation (TSX-V:CTM) (OTCQB: CTMCF) is pleased report results for the first seven drill holes completed during the winter 2021 drill program at the Wilding Gold Project, in central Newfoundland. Results are from the Red Ochre Complex; the westernmost zone of gold mineralization identified at Wilding to date. Planning is now underway for a large summer program consisting of surface sampling and drilling up to 5,000m at Wilding.

The Company completed 2,335m over 16 drill holes in its first winter drill program. This program focused on stepping out from the 2017 discovery holes at the Elm Zone and Red Ochre Complex and drilling a target not previously drilled in Dogberry. Results are pending for nine drill holes.

“Drilling at the Red Ochre Complex is proving there is abundant gold mineralization spread out over a large area,” stated Chris Pennimpede, President & CEO of Canterra. “We look forward to combining this first pass drilling with the pending soil sample results and re-interpretation of the geophysical data to define the source for the broad gold mineralization intersected to date.”

Canterra is earning a 100% interest in the Wilding and Noel Paul Gold Projects, located 50km south, by logging road, from Millertown and directly northeast of Marathon Gold’s Valentine Lake Gold Project in Central Newfoundland. The 236km2 property package includes 50km of the northeastern strike-extension of the Rogerson Lake Structural Corridor, which hosts Marathon Gold’s Valentine Lake deposits, Matador Mining’s Cape Ray deposit, Sokoman’s Moosehead discovery and TRU Precious Metals’ Golden Rose and Twilight discoveries. A $2.75 million exploration program is underway, focusing on drilling and surface exploration on the Wilding Gold Project. This program will include additional diamond drilling on the existing zones and follow up trenching and diamond drilling on numerous targets identified from previous soil geochemistry sampling. Canterra’s team has more than 100 years of experience searching for gold and diamonds in Canada and have been involved in the discovery of the Snap Lake diamond mine, in addition to the discovery of the Blackwater Gold deposit in British Columbia, Canada.

The scientific and technical information and exploration data quality assurance and control contained in this news release were prepared under the supervision of David Evans, M.Sc., P.Geo., Manager of Exploration for Canterra. Mr. Evans is a Qualified Person as defined by National Instrument 43-101.

Quality Assurance-Quality Control protocols followed at the Wilding Lake Project include the insertion of blanks, standards and duplicates at regular intervals in each sample batch. Drill core is cut in half with one half retained at site, the other half tagged and taken by Canterra personnel to Eastern Analytical Limited in Springdale, NL. All reported core samples are analyzed for Au by fire assay (30g) with AA finish. All mineralized intervals are reported as core lengths with no true thickness implied.