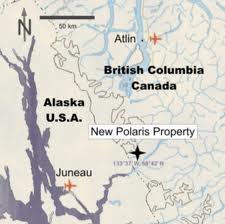 Highlights of the Agreement

Catalin Chiloflischi, CEO of Canarc, remarks: “The signing of this agreement is a major step towards advancing the New Polaris Gold Mine to production. We are pleased to have Panterra as our strategic partner that shares our vision of New Polaris Gold Mine becoming an important Canadian high-grade gold mine. This partnership provides Canarc with direct access to the world’s first Albion processing plant for treating refractory gold concentrates into dore gold bars. We see this agreement as strategically important in order to advance New Polaris to production in a concrete and meaningful way for the benefit of Canarc and our shareholders.”

Panterra Gold and the Albion Process

The Agreement provides for Panterra to progressively spend C$10 million on three Stages of predevelopment activities including additional drilling, metallurgical test work, environmental permitting, detailed mine planning, tailings dam design, preliminary engineering, and completion of a Definitive Feasibility Study to earn up to 50% in New Polaris.

The first Stage of the predevelopment expenditure will cost approximately C$500,000 over a five-month period. An initial C$250,000 will be paid to Canarc within 2 days and the additional C$250,000 within 90 days of signing this agreement.

Stage one will involve laboratory production of flotation concentrate followed by test work through Glencore Technology Albion pilot plant in Brisbane, Australia to confirm expectations that the New Polaris concentrate is amenable to oxidation and gold extraction at the Las Lagunas process plant.

This stage will also involve a comprehensive technical and economic review of the proposed development and commencement of environmental baseline data collection required for permitting.

Following completion of Stage one, PGBC will have 60 days in which to elect to proceed to Stage two of the predevelopment expenditure, at a cost of approximately C$3.5 million.

Expenditures will include a 10,000m drilling program, additional engineering and completion of the seasonal collection of field data required for the environmental permitting.

On completion of the second stage, PGBC will have earned a 20% interest in the JV based on a cumulative C$4M spending during stage one and two.

Following completion of stage two, PGBC will have 60 days in which to elect to proceed to stage three of the predevelopment expenditure, at a cost of approximately C$6 million.

Third Stage expenditures will be primarily focused on the completion of a Definitive Feasibility Study which will involve a further 10,000m of in-fill drilling, additional metallurgical test work, and preliminary engineering.

On completion, PGBC will have earned a 50% interest in the Project and will be appointed Manager.

PGBC can increase its interest in New Polaris to 51% by purchasing 1% from Canarc within six months of completion of the DFS at a cost of 1% of the NPV established by the DFS using a 10% discount rate.

Garry Biles, P.Eng, Canarc’s President and COO, is the Qualified Person who reviewed and approved the technical information contained in this news release.

A NI 43-101 preliminary economic assessment report (“PEA”) for the New Polaris gold mine project, dated April 10, 2011, was completed by Moose Mountain Technical Services. A copy of the report was filed on the Sedar website on May 26, 2011 and can be viewed at: http://www.sedar.com.

Canarc is a growth-oriented, gold exploration and mining company listed on the TSX and the OTC-BB. The Company is currently focused on exploring its gold properties in north and central BC. Canarc is also seeking a partner to advance its 1.1 million oz, high grade, underground, New Polaris gold mine project in British Columbia to the feasibility stage. Canarc is also seeking to acquire an operating or pre-production gold mine in the Americas.