CanAlaska Uranium Ltd. (TSX-V: CVV) (OTCQB: CVVUF) (FSE: DH7N) is pleased to announce that it has entered into an option agreement with Fjordland Exploration Inc. subject to regulatory approval, which allows FEX to earn up to an 80% interest in CanAlaska’s 100%-owned North Thompson Nickel Project in Manitoba, Canada for exploration expenditures of $9M, 8.5M common FEX shares, and other considerations. 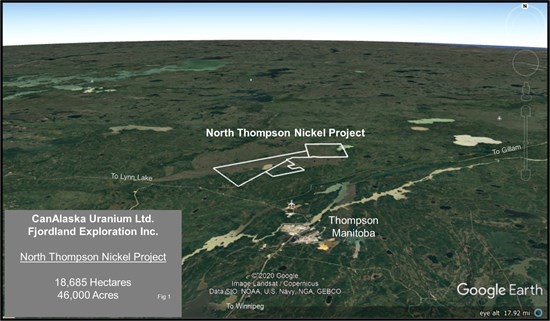 FEX may earn up to an 80% interest in the Project by undertaking work and payments in three defined earn-in stages as shown in Table 1. During Stage 1 and Stage 2 of the option agreement, CanAlaska will receive fees as operator of the Project.

The structure and content of the underlying joint venture agreement and Net Smelter Return royalty has been agreed, and form part of the executed option agreement.

FEX will issue to the Company a further 10,000,000 common shares in FEX upon completion of a positive Feasibility Study for the Project provided that FEX has earned, at a minimum, a 70% interest as outlined in Stage 2 of the option.

After successful completion of either of Stage 1 or Stage 2 of the option agreement, and if FEX elects to not enter the next stage or in the case of completion of Stage 3, a joint venture will be formed and the parties will either co-contribute on a simple pro-rata basis or dilute on a pre-defined straight-line dilution formula. If either of the Company or FEX dilute down to less than 10% Project interest, the party diluting will relinquish its remaining Project interest and a 2% net smelter return (“NSR”) royalty will be granted to the diluting party. In the event the Company is the party granted the 2% NSR royalty, the Company will be entitled to receive up to a maximum $10,000,000 advance royalty payment (“ARP”) at commencement of commercial production on the Project, with the sum of the ARP payment being calculated based on 2% of the value of the capital expenditures to develop the operation.

The Project contains a series of high-grade nickel drill intersections from historical work that warrant follow-up with modern geophysics and drilling. There are also numerous untested targets. The area is approximately 25 kilometres from the city of Thompson, Manitoba, where there are existing Tier-1 mines and nickel processing facilities owned and operated by Vale.

The Thompson Nickel Belt is the fifth largest sulphide nickel belt in the world based on contained nickel endowment, containing over 18 nickel deposits and over 5 billion lbs of nickel production since 1959. The largest deposit is the main Thompson Mine at an estimated 150Mt at an average grade of 2.3% nickel. The North Thompson Project covers much of the north and north-western extension of this belt. For further information visit http://www.canalaska.com/project/thompson-nickel-belt/

The “Strong” Licence (MEL1067A), the “Hunter” Licence (MEL1118A), and “Hunter Claims” have a total combined area of 18,685 hectares (Figure 2). These licences and claims have seen virtually no exploration drilling since 2005. In 2007 VTEM airborne geophysical survey provided a number of priority Tier-1 size drill targets. These have never been drill-tested. It is anticipated the first programs under this option agreement will focus on these high priority targets.

The nearby Mel deposit has an Indicated plus Inferred resource of 5.3Mt at 0.87% nickel. The structure hosting the Mel deposit extends onto the Project landholdings.

CanAlaska president, Peter Dasler, comments; “I wish to thank both teams for progressing this new project deal during these difficult times. We all remain committed to advancing the project as we believe that a significant new discovery is possible. The added bonus to shareholders is the location, with excellent infrastructure in this area, and the timeliness of significant new interest in nickel production for battery and clean energy requirements.” 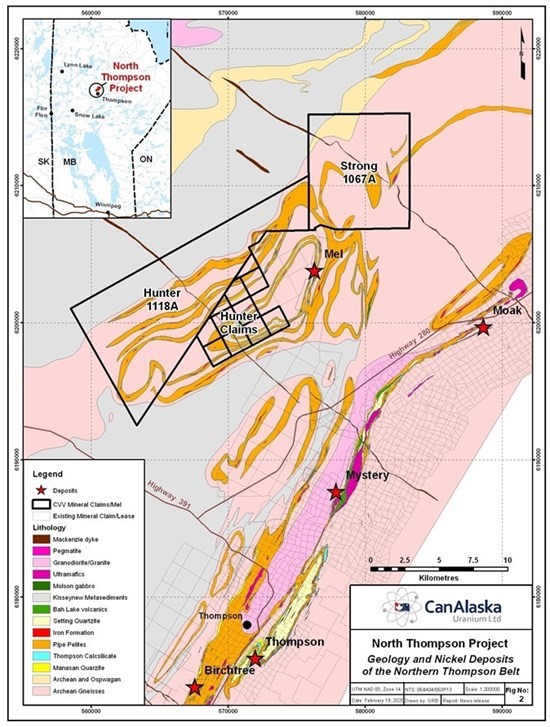 CanAlaska is advancing its key West McArthur uranium project in the Athabasca Basin, a joint venture with Cameco Corporation, and working on new initiatives for its nearby Cree East uranium project. These are showcased in a recent video presentation on the company website:

Senior management is monitoring the current COVID 19 situation, and has reduced salaries by 50% while field activities are paused. The Company’s treasury remains strong, with a cash position of $1.56M.