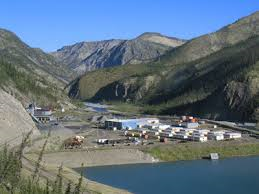 Canadian Zinc Corporation (TSX:CZN) (OTCQB:CZICF) is pleased to announce the start-up of its underground program at its Prairie Creek zinc, lead, silver mine located in the Northwest Territories.

Following a tender process, Procon Mining and Tunneling Ltd., has been awarded the contract to carry out mine rehabilitation, exploration, mine development and initial production at the Prairie Creek Mine.

The Contract was signed at ceremonies held Monday in the Company’s office in Fort Simpson, and in Nahanni Butte, NWT, to mark the occasion. Attendees included representatives of the local communities of Nahanni Butte and Fort Simpson, the President of Procon Mining, Jim Dales, and the Minister of Industry, Tourism and Investment of the Government of the Northwest Territories, the Honourable David Ramsay.

Alan Taylor, Chief Operating Officer of Canadian Zinc said, “We are excited to be getting back to work underground and to be again working with Procon. This program marks the next step towards production at the Prairie Creek Mine.”

Procon Mining and Tunneling Ltd. has a long reputation of mining in the north of Canada including work in progress at Dominion Diamond Ekati Corporation’s Ekati Mine in the Northwest Territories, Pretium Resource’s Brucejack Project near Stewart, British Columbia and Yukon Zinc Corporation’s Wolverine Project near Watson Lake in the Yukon Territory. Procon has direct experience with the Prairie Creek Mine having completed rehabilitation programs in 2004/5 followed by a continuous underground winter program during 2006/7 which involved the establishment of a new 650 metre-long exploration decline tunnel from which exploration drilling was undertaken.

Earlier this year Canadian Zinc undertook a tendering process with major mining contractors with the objective of optimising mine development and operating costs related to the Prairie Creek Mine. This involved the creation of a comprehensive mine tender package and an underground site visit to Prairie Creek by all prospective contractors, which led to tenders being developed by the contractors, with bids being submitted and assessed by the Company.

Procon’s experience in the north gives them the operational expertise to ensure a successful project.

The mine exploration and development program has been divided into stages. The first stage will be to re-open and access the underground by dewatering and re-installing electrical and ventilation services to the 650 metre-long decline tunnel which is located at the end of the 870m underground level. The 870m level portal is located at the mine site adjacent to the mill building. There are two other existing underground levels developed on the 930m level and 970m level.

Canadian Zinc plans to carry out an exploration diamond drill program from underground drill stations located at the end of the decline tunnel, with the objective of upgrading part of the currently inferred resources to an indicated category. The drilling will be completed on four, 50-metre sections and is estimated to comprise about 6,000 metres of diamond drill coring over 21 holes. This exploration activity will be carried out under the scope of Land Use Permit MV2012C008 and Water Licence MV2001L2-003 issued from the Mackenzie Valley Land and Water Board. An underground drilling rig and other equipment will be mobilized into the site by Procon.

During dewatering of the decline, hydrological monitors will be installed in the 870 tunnel bedrock walls to measure groundwater aquifer flows. Data from this monitoring program will provide necessary information to predict future underground hydrology pumping requirements and plan water management on surface.

Improvements to the Surface Facilities

At the same time as the underground program is proceeding, the Company will also continue upgrade and repair work on the existing surface facilities. This surface program will include completing further site testing and engineering design work for the proposed Water Storage Pond and the Waste Rock Pile.

Additional rehabilitation work will be completed on the existing camp to upgrade the trailers to more efficient standards for winter accommodations. Continued demolition of the old mill powerhouse generators and switchgear to prepare the powerhouse for the proposed new power generating equipment will also be carried out. Further upgrades of workshops and the sewage treatment plant will be completed.

About the Prairie Creek Mine

The Prairie Creek Mine contains a partially developed infrastructure including a 1,000 tonne per day flotation mill, workshops, accommodations, and support facilities.

In September 2013, after almost five years in the regulatory and environmental assessment process, the Company received a Type “A” Water Licence which, along with previously issued permits and licences, permits the operation of a mine at Prairie Creek.

Coupled with the issue of the permits and licences was a commitment by Canadian Zinc to maximize opportunities for aboriginals and northern residents of the Northwest Territories to participate in activities related to the construction, development and operation of the Prairie Creek mine. Impact Benefits Agreements were signed with Nahanni Butte Dene Band and Lidlii Kue First Nation and a Socio-Economic Agreement was signed with the Government of the Northwest Territories.

The Agreements establish the protocols and procedures by which the Company, the IBA partners and Government of the Northwest Territories have agreed to work together to maximize the beneficial opportunities and minimize any negative socio-economic impacts arising from an operating Prairie Creek Mine.

Under the terms of the Mine Development Contract, Procon is committed to engage the local communities to participate in the employment and business opportunities arising from the Contract, and to maximize benefits to the North by involving the communities, northern residents and local suppliers in the development of the Prairie Creek project.