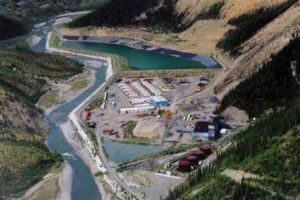 Canadian Zinc Corporation (TSX:CZN)(OTCQB:CZICF) is very pleased to announce that the Mackenzie Valley Land and Water Board has completed its regulatory process for the issue to Canadian Zinc of a Type “A” Water Licence for the Company’s wholly owned Prairie Creek Mine in the Northwest Territories, Canada and has forwarded the Licence to the Federal Minister of Aboriginal Affairs and Northern Development Canada with the recommendation that the Minister approve and sign the Licence.

“This Type ‘A’ Water Licence is the key regulatory permit needed for the construction, development and operation of the Prairie Creek Mine,” stated Alan B. Taylor, COO and VP of Exploration for Canadian Zinc.

“The successful completion of the regulatory process is the culmination of many years of effort by the Canadian Zinc team, the Mackenzie Valley Land and Water Board, the various government agencies and all the stakeholders in the region. The positive recommendation of the Water Board demonstrates that a broad consensus has been achieved through the process and we look forward to receiving the approval of the Minister and the issue of the Water Licence in due course,” added Mr. Taylor.

In its recommendation to the Minister, the Water Board provided some comments on the issues faced and the decisions made in respect of this Licence. The Board accepted the site-specific water quality objectives derived by Canadian Zinc. These are almost all more stringent than the country-wide guideline values adopted by the Canadian Council of Ministers of the Environment. The Board also determined, after many months of review and study, that effluent quality criteria using a variable load-based discharge approach, as proposed by Canadian Zinc, will be a more protective and practical way of controlling effluent discharge from the mine to Prairie Creek. The Board recognizes that this is a new approach compared to the standard fixed EQC, but believes that practical and effective mechanisms can be put in place to ensure compliance.

Upon receipt of Ministerial approval, the new Type “A” Water Licence MV2008L2-0002 will permit Canadian Zinc to conduct mining, milling and processing activities at the Prairie Creek Mine Site, use local water, dewater the underground mine, and dispose of waste from mining and milling.

In January 2013, the MVLWB issued Land Use Permit MV2012F007 which permits the construction, maintenance, operation and use of the winter access road connecting the Prairie Creek Mine to the Liard Highway. This permit allows the outbound transportation of the zinc and lead concentrates produced at the mine, and the inbound transportation of fuel and other supplies during the actual operation of the Prairie Creek Mine.

In June 2013, the MVLWB issued LUP MV2008D0014 which permits Canadian Zinc to extract ore and waste rock from the Prairie Creek Mine, operate a flotation mill concentrator to produce zinc and lead concentrates, create a waste rock facility, and refurbish and develop site facilities in support of the mining operation, along with the eventual closure and reclamation of the mine site.

Also in June 2013, the MVLWB issued LUP MV2008T0012 which permits Canadian Zinc to construct and operate the Liard Transfer Facility to be situated near the junction of the existing Prairie Creek Mine access road and the Liard Highway. The Liard Transfer Facility is a staging area at the south end of the winter access road designed to temporarily store outbound concentrate and inbound supplies.

Following the approval of the Type “A” Water Licence from the Minister, and receipt of a final LUP and a Type “B” Water Licence from Parks Canada for the portion of the realigned access road within the Nahanni National Park Reserve (“NNPR”), Canadian Zinc will have secured all of the water licenses and land use permits required to operate the Prairie Creek Mine. Canadian Zinc currently holds a LUP issued by Parks Canada for the use of the original road route through NNPR to resupply the mine site during exploration activities.

The permit applications for the Prairie Creek Mine operations have undergone an extensive regulatory, environmental assessment and permitting process which began in June 2008 when Canadian Zinc applied to the MVLWB for a Water Licence and associated LUPs to support a mining operation at Prairie Creek.

The 2008 applications were referred to an Environmental Assessment by the Mackenzie Valley Environmental Impact Review Board, the primary authority responsible for all environmental assessment and review throughout the Mackenzie Valley in the Northwest Territories, and underwent various stages within the EA that included a written hearing, submittal of a Developers Assessment Report, Information Requests, Technical Sessions, a Community Hearing, a two-day Public Hearing, and Final Submissions.

On December 8, 2011, the Review Board issued its Report of Environmental Assessment and Reasons for Decision and concluded that the proposed development of the Prairie Creek Mine, including commitments made by Canadian Zinc during the proceedings, is not likely to have any significant adverse impacts on the environment or to be a cause for significant public concern.

The Review Board found that there was broad support among aboriginal organizations and communities in the Dehcho Region for the benefits that the Prairie Creek Mine could bring to the Dehcho Region of the Northwest Territories.

The Socio-economic Agreement signed between Canadian Zinc and the Government of the Northwest Territories was a key document in the Review Board’s findings on impacts of the project on the human environment. In the Review Board’s view, the Prairie Creek Mine is not likely to have significant adverse impacts on the human environment of the Dehcho Region or the Northwest Territories provided the developer’s commitments are followed and enforced and the Socio-economic Agreement is implemented.

In January 2012, following the completion of the EA in December 2011, the Water Board commenced the regulatory process for the issue of a Type “A” Water Licence and associated Land Use Permits.

After the original applications for the operating permits had been submitted to the Water Board in 2008, the adjacent NNPR was expanded in 2009 and now encircles, but does not include, the Prairie Creek Property, but the expanded Park area includes a significant portion of the Prairie Creek Access Road route. However, when NNPR was expanded the Canada National Parks Act was amended to enable the Minister of the Environment to enter into leases or licences of occupation of, and easements over, public lands situated in the expansion area for the purposes of a mining access road leading the Prairie Creek area, including the sites of storage and other facilities connected with that road.

The applications for land use permits, and water licences relating to the road access became multi-jurisdictional and the Company applied to both to the Water Board and Parks Canada for road related permits and licences.

On March 15, 2013 the Water Board circulated a Draft Type “A” Water Licence and two Draft Type “A” Land Use Permits for the operation of the Prairie Creek Mine to the government agencies and departments and to interested parties with a request for comments by April 12, 2013. Canadian Zinc had an additional week to review any comments and responded to the Water Board with its own comments.

Canadian Zinc is a Toronto-listed exploration and development company. The Company’s key project is the 100%-owned Prairie Creek Mine, an advanced-staged zinc-lead-silver property, located in the Northwest Territories in Canada. Prairie Creek is an underground operation that will utilize multiple mining methods to access readily available ore. Canadian Zinc has the majority of the required infrastructure in place including a 1,000 tonne per day mill, five kilometres of underground workings and related equipment, a heavy duty and light duty surface fleet, three exploration diamond drills and a 1,000 metre airstrip.

Canadian Zinc also holds a 100% interest in the South Tally Pond VMS project, along with other property interests in central Newfoundland, where a successful drilling program was carried out in winter 2013.