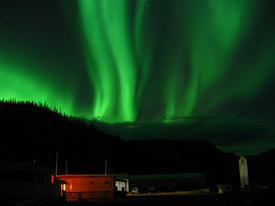 Five drill holes totalling approximately 2,500 metres of coring are planned to test a large multi-stacked gravity and electromagnetic geophysical anomaly that is estimated to be at a depth of between 200 and 450 metres below surface, situated approximately one kilometre from the mine site, outside but adjacent to the defined mineral resource. The drill rig is being mobilized to the first pad and drilling is expected to commence by the end of the week.

Alan Taylor, Vice President of Exploration and COO of Canadian Zinc stated, “The delineation at the end of last season of a new strong coincident EM and gravity geophysical anomaly adjacent to the defined deposit was particularly interesting and we are anxious to drill test it. The discovery of any resource in this area could have a significant impact on the economics of the existing project and future implications on additional property-wide exploration at Prairie Creek.”

In 2012, a geophysical exploration program involving surface and downhole electromagnetic and surface gravity surveys was completed in the proximity of the Prairie Creek deposit. The results defined a strong multi-channel EM anomaly. A coincident gravity anomaly was also identified over the same area by a loose-grid gravity survey.

This 2013 drill program is fully supported by a recently completed $4 million flow-through financing which closed on August 20, 2013 (refer to Company news release of same date). The Company has mobilized one of its three surface diamond drill rigs to commence this program which will continue for the next two months.

The Mackenzie Valley Land and Water Board completed its regulatory process July 5, 2013 by finalizing a Type “A” Water Licence and subsequently forwarding it to the Minister of Aboriginal Affairs and Northern Development Canada with the recommendation that the Minister approve and sign the Licence. The MVLWB has previously issued three Land Use Permits and a Type “B” Water Licence to the Company for future operations.

Canadian Zinc is a TSX-listed exploration and development company trading under the symbol “CZN”. The Company’s key projects are the 100%-owned Prairie Creek property, an advanced-staged zinc-lead-silver property, located in the Northwest Territories in Canada and the 100% owned South Tally Pond project, which includes the Lemarchant deposit, along with other property interests in central Newfoundland.