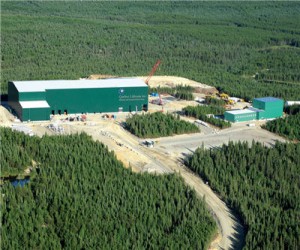 Various upgrades to the hydrometallurgical plant, including installation of acid-cleaning and bicarbonate recovery units and upgrades to pumping capacity, were completed under the direction of the recently appointed Quebec Lithium process management team, whose process expertise encompasses a number of decades of hard-rock lithium operations.  The hydrometallurgical circuits of the plant will be phased in sequentially over the coming week as spodumene concentrate production commences.

In addition, the Company continues to be encouraged by the strength of the supply/demand factors in the lithium carbonate market and continuing signs that electric and hybrid vehicles are gaining acceptance in global markets.  For example, over the past week there have been a number of positive EV announcements in the automotive industry. Volkswagen outlined plans to offer as many as 40 electric or hybrid vehicles, with an initial 14 models with alternative drive available by next year. The Company publicly vowed to make VW the top automaker in electric mobility by 2018. Tesla revealed that its first European supercharging stations are already operational and that a pan-European network is set for completion by year-end 2014. Tesla claims that by the end of next year, 100 percent of the population of Germany, the Netherlands, Switzerland, Belgium, Austria, Denmark and Luxembourg will live within 320 km of a Supercharger station (well within the car’s driving range), enabling Tesla drivers to recharge for free.

The Company holds a 100% interest in the Québec Lithium Project near Val d’Or, the geographical heart of the Québec mining industry. It has completed construction and is in the commissioning phase of an open-pit mine and on-site processing plant with estimated capacity to produce approximately 20,000 tonnes of battery-grade lithium carbonate annually. Metallurgical tests have produced battery-grade lithium carbonate samples. A five-year off-take agreement for a minimum of 12,000 tonnes per year was recently signed with Tewoo-ERDC, one of China’s largest commodities traders. A second off-take for up to 5,000 tonnes per year was recently signed with Marubeni Corp., a major Japanese commodities trading company. Lithium carbonate is used in lithium-ion batteries that power consumer electronics (laptops, tablets, etc.), power-grid storage facilities and electric and hybrid vehicles.