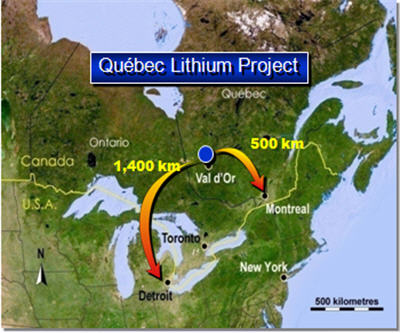 Canada Lithium Corp. (TSX: CLQ) (U.S. OTC: CLQMF) today announced that it has entered into an agreement with certain credit funds affiliated with Apollo Global Management, LLC, to purchase, on a private placement basis, 15,850 convertible unsecured subordinated debentures of the Company which were issued at par at a price of US$1,000 per Debenture for gross proceeds to the Company of US$15,850,000. The Company intends to use the net proceeds from the Offering for working capital and general corporate purposes.  The Offering was completed concurrently with the entering into of the purchase agreement. In connection with the Offering, the Company paid to the purchasers of Debentures an arrangement fee in the aggregate amount of US$850,000.

The Debentures will mature on July 31, 2018 and pay a coupon of 11.0% per annum from the closing date payable semi-annually in arrears on the last day of June and December of each year commencing on December 31, 2013. The first interest payment will be made on December 31, 2013 and will consist of interest accrued from and including the Closing Date to December 31, 2013. Subject to specified conditions, the Company may elect, from time to time, subject to applicable regulatory approval, to satisfy its obligation to pay interest on the Debentures, on the date it is payable (i) in cash; (ii) by delivering sufficient common shares (“Common Shares”) of the Company to a designee of a holder of Debentures, for sale, to satisfy the interest obligations in accordance with the debenture purchase agreement in which event holders of the Debentures will be entitled to receive a cash payment equal to the interest payable from the proceeds of the sale of such Common Shares; or (iii) any combination of (i) and (ii) above.

The Debentures are convertible at the holder’s option into Common Shares of the Company at any time prior to the close of business on the earlier of the Maturity Date and the business day immediately preceding the date fixed for redemption of the Debentures. The Debentures convert at a conversion price of $0.72 per Common Share being a ratio of 1,388.89 Common Shares per $1,000 principal amount of Debentures, subject to adjustment in certain events including dividend protection for the declaration of dividends. Holders converting their Debentures will receive accrued and unpaid interest thereon, up to, but excluding, the date of conversion. The conversion rate may be adjusted upon the occurrence of certain events, pursuant to standard anti-dilution provisions set out in the debenture purchase agreement governing the Debentures.

The Debentures are not redeemable before June 30, 2016. On and after the First Call Date and prior to the Maturity Date, the Company may, at its option, at any time and from time to time, subject to providing not more than 60 and not less than 30 days’ prior notice, redeem the Debentures, in whole or in part, at par plus accrued and unpaid interest provided that the weighted average closing price of the Common Shares on the Toronto Stock Exchange during the 20 consecutive trading days ending five trading days preceding the date on which the notice of redemption is given is not less than 130% of the Conversion Price.

The Debentures rank subordinate in right of payment of principal and interest to all senior obligations of the Issuer.

Subject only to the customary post-closing listing conditions imposed by the Toronto Stock Exchange 33,858,502 Common Shares issuable upon conversion, redemption or maturity of the Debentures, upon the occurrence of a change of control or as payment of interest, have been conditionally approved for listing on the TSX.

All securities issued in connection with the Offering are subject to a four (4) months plus one (1) day hold period from the Closing Date, pursuant to Canadian securities laws.

The Company holds a 100% interest in the Québec Lithium Project near Val d’Or, the geographical heart of the Québec mining industry. It has completed construction and is in the commissioning phase of an open-pit mine and on-site processing plant with estimated capacity to produce approximately 20,000 tonnes of battery-grade lithium carbonate annually. The Company recently announced it has produced a first run of 99.1% lithium carbonate from its processing plant. The material is anticipated to be upgraded to 99.5% battery-grade material. A five-year off-take agreement for a minimum of 12,000 tonnes per year was recently signed with Tewoo-ERDC, one of China’s largest commodities traders. A second off-take for up to 5,000 tonnes per year was recently signed with Marubeni Corp., a major Japanese commodities trading company. Lithium carbonate is used in lithium-ion batteries that power consumer electronics (laptops, tablets, etc.), power-grid storage facilities and electric and hybrid vehicles