Alan Carter, Cabral’s President and CEO commented, “We are extremely pleased with the assay results received on the five metallurgical test diamond drill holes recently completed at the MG gold-in-oxide blanket and look forward to receiving the results of the metallurgical test work during the first quarter of 2022, which will be key to understanding the economic viability of the blanket mineralization. The diamond drill results from the Alonso target suggest that the high-grade boulders that we see on surface at Alonso are not derived from the immediate vicinity and may have been eroded from a source that is located further away than we previously anticipated. The identification of a major gold anomaly in streams which is coincident with a major E-W trending magnetic anomaly, 750m north-east of Alonso, opens up the possibility of a more distal source for the high-grade boulders. The fact that our exploration team continues to identify highly prospective targets in parallel with the drilling efforts is very encouraging and demonstrates the enormous potential of the Cuiú Cuiú gold district. Cuiú Cuiú is a district which contains 43 mainly high-grade targets outside the two known gold deposits with resources. Cabral currently has four rigs turning on three separate targets.” 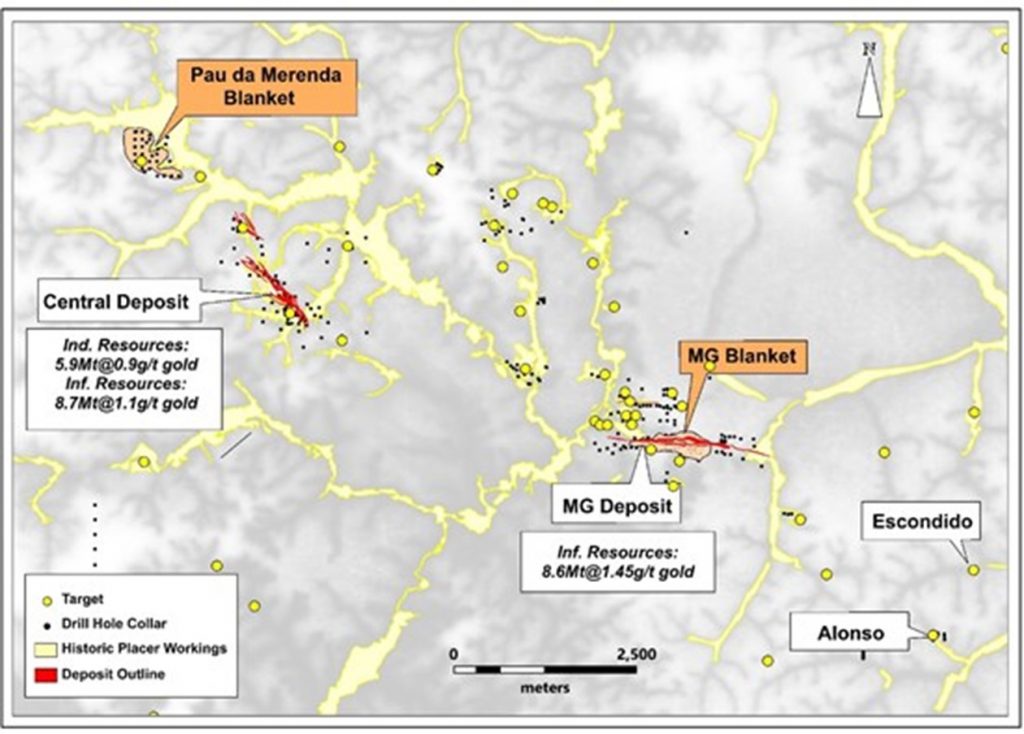 Figure 1: Map showing the location of the Alonso target and the major new Escondido gold anomaly in streams north-east of Alonso, as well as the MG and Central gold deposits and the overlying MG gold-in-oxide target, as well as the Pau de Merenda (PDM) gold-in-oxide blanket and other key targets within this part of the Cuiú Cuiú district

Cabral completed 816.5m in five reconnaissance diamond-drill holes testing around, and beneath, the Alonso high-grade boulder field (DDH230, 231, 234, 236, and 246). None of the five holes intersected significant gold mineralization. This indicates that the source of these boulders may be further afield than previously envisaged.

However, recent reconnaissance stream-sediment sampling in the drainage 750m north-east of Alonso identified very high levels of gold in stream sediments up to 1.65g/t gold (Figure 2). These are significantly higher than those encountered in most other areas at Cuiú Cuiú. In addition, the area is characterized by a very strong E-W trending magnetic anomaly and has peripheral historic placer gold workings. These also occur immediately west of a NE trending late diabase intrusive dyke. The presence of these coincident features is remarkably similar to the MG gold deposit which is located 3.4km to the NW. 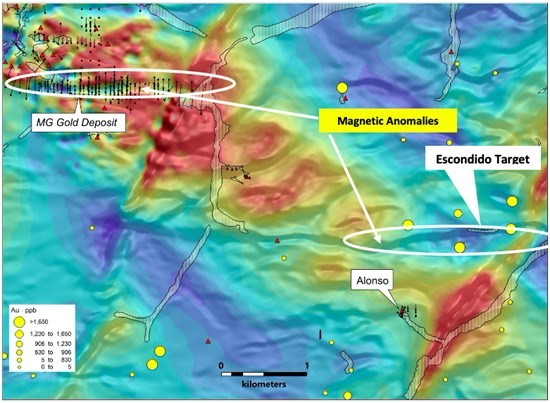 This new stream-sediment anomaly constitutes a major new target at Cuiú Cuiú. It will require further soil sampling, trenching and geophysics in advance of drilling. It is quite possible that the boulders that constitute the Alonso target could have been derived from this target area. This new target has been named the Escondido target.

Cabral’s team is convinced that the source of the high-grade boulders at Alonso can be identified, but it will take further work. Over the last couple of years, the Company has learned that a post-mineral lake / river depositional event has resulted in the erosion and redeposition of weathered basement rocks. In places, this erosional event has resulted in the formation of mineralized colluvial gold-in-oxide blankets while in other areas, material (such as boulders) may have been transported further than previously thought.

As previously announced (see press release dated December 2, 2021), five diamond-drill holes (MET01 – MET05) totaling 374m were recently completed at the MG gold-in-oxide blanket (Figure 3) with the specific objective of collecting sufficient material to allow for the completion of metallurgical test work, including column leach tests, at the Kappes Cassiday laboratory in Reno, Nevada (see press release dated November 9, 2021). This work is critical to understanding the economic viability of this unconsolidated surface oxide mineralization at MG, which may be amenable to low-cost heap-leach processing. 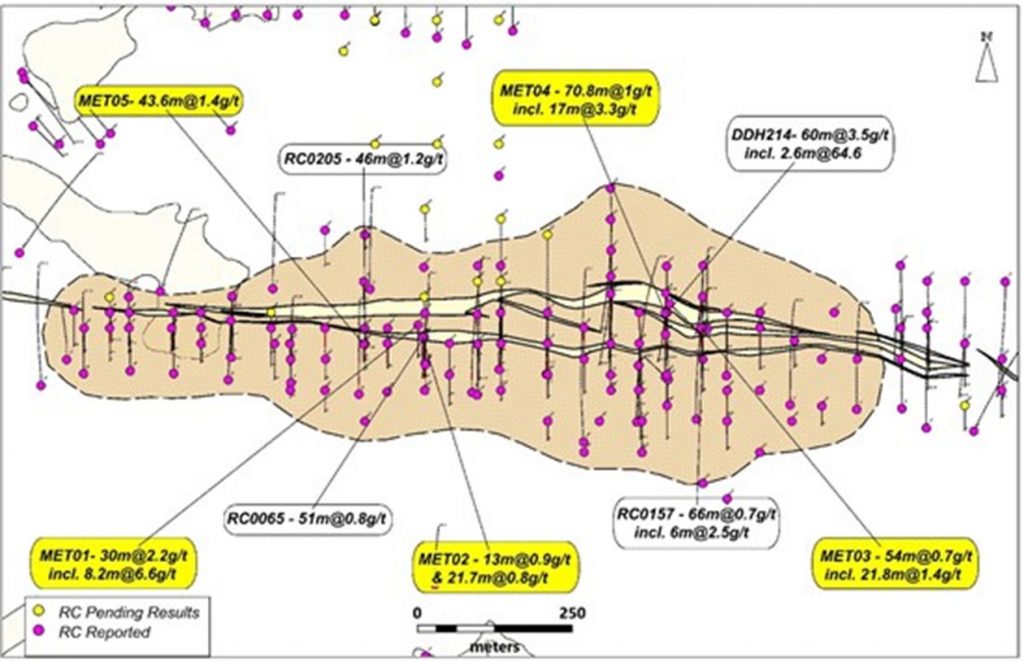 Figure 3: Map showing the outline of the MG gold-in-oxide blanket (in beige) and the underlying primary MG gold deposit (in pale yellow) and results from recently completed diamond drill holes (MET01 to MET05 plus historic drill holes from the same locations as the metallurgical test holes.

Drill hole MET05 was drilled on section 553210 and intersected 43.6m @ 1.4g/t gold from surface. RC205 was previously drilled from the same collar location and returned 46m @ 1.2g/t gold (see press release dated November 9, 2021). These mineralized intervals demonstrate that the RC and diamond drill results are reproduceable in the gold-in-oxide blanket at MG.

Table 1: Table of drill results for diamond drill metallurgical test holes MET01 to MET05.
The results for MET01 were previously reported on December 2, 2021

Diamond drilling at MG is continuing with results pending on an additional ten diamond drill holes.

Diamond drilling is continuing at the primary Central gold deposit with results pending on eight holes from a total program of 43 planned diamond-drill holes. These are designed to further define the high-grade zones at Central. Previous diamond drilling at Central included 220.7m @ 2.0 g/t gold including 9.8m @ 17.9 g/t gold.

RC drilling at Central is in progress with the objective of testing for the presence of gold-in-oxide blanket mineralization above the primary Central gold deposit. Results are currently pending on 12 holes.

Diamond drilling continues at the PDM target, located 2.5km NW of the Central gold deposit, and is aimed at testing for the presence of a primary gold deposit in the basement intrusive rock underlying the gold-in-oxide blanket. Results are currently pending on seven diamond-drill holes.