The Machichie target is located 500m north-west of the MG gold deposit (Figure 1). Previous drilling at the Machichie Main zone identified a persistent mineralized zone which is east-trending and dips steeply to the north. This main zone consists of parallel high-grade core zones surrounded by a low-grade alteration envelope. This is similar in style to the bedrock gold deposits at MG and Central as well as the recently announced PDM basement discovery. 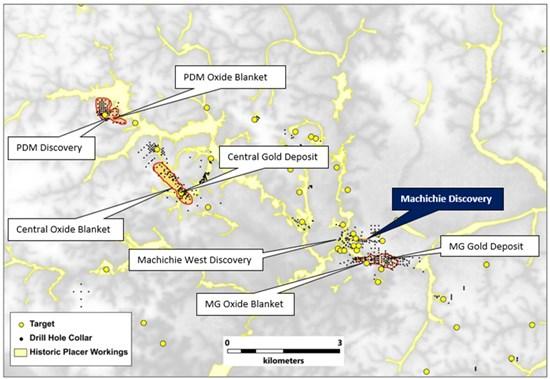 Figure 1: Map showing the location of the Central and MG gold deposits, the recent discoveries at PDM and Machichie, the three oxide blankets and the new Machichie West area. Other key gold targets are shown as yellow circles 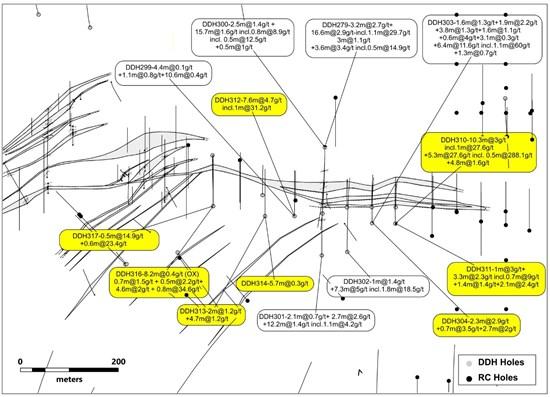 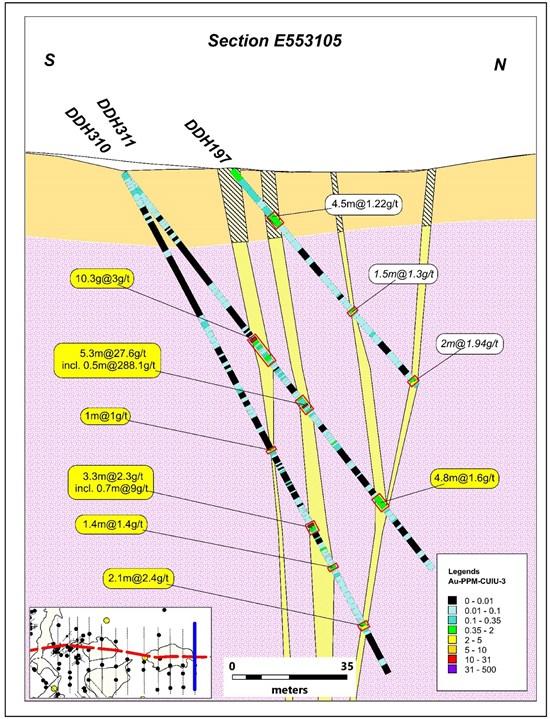 DDH312 intersected the mineralized zone as per projections at 88.6m and returned 7.6m @ 4.7 g/t gold including 1.0m @ 31.2 g/t gold. This further supports continuity of the Machichie mineralized zone down-dip. 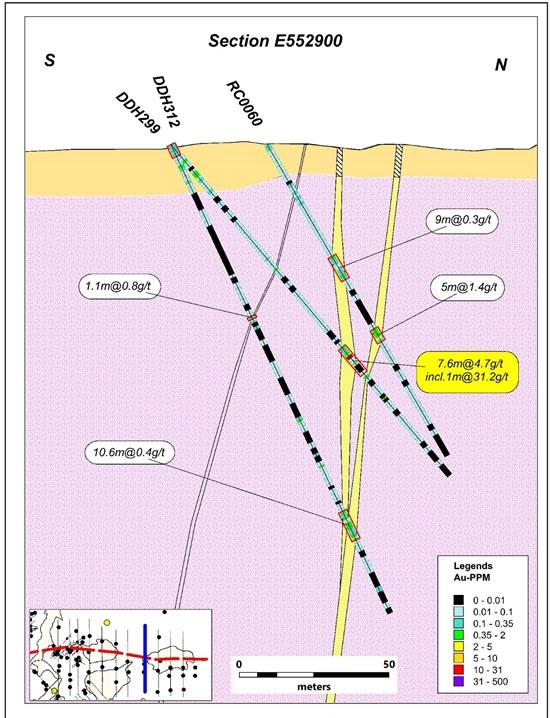 DDH316 and DDH317 were drilled from the same platform on section E552735 from south to north. Two shallow diamond-drill holes had been previously drilled on this section (DDH180 and DDH181). Each of these two previous holes encountered a single mineralized zone at shallow depths. DDH181 cut 6.6m @ 1.6 g/t gold in fresh altered basement, while DDH180 intersected 1.1m @ 1.5 g/t gold in saprolite (Figure 5). 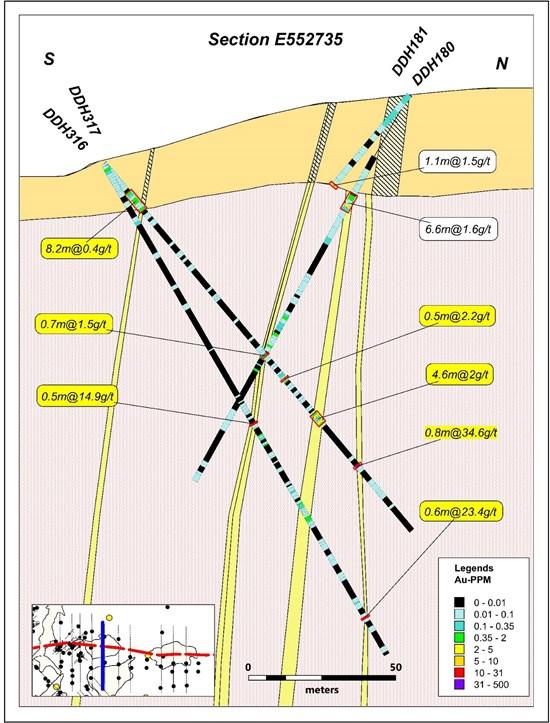 The results from these additional diamond-drill holes at the Machichie Main zone reaffirm that the mineralized zone remains open at depth, is continuous down-dip, and comprises several parallel zones. All of the sections described here are from the central eastern part of the mineralized zone, and indicate that the Machichie Main zone comprises a series of parallel high-grade zones occurring within a broader low-grade alteration zone as is the case with the Central and MG gold deposits.

Further drilling will be required prior to determining a maiden resource estimate for the Machichie Complex. There are now multiple mineralized zones within the Machichie Complex that may combine to form the next new significant gold deposit at Cuiú Cuiú. The recent trenching to the west suggests that the Machichie Main zone could extend over 900m from east to west, and the zone remains open further to the west. The northeast-trending vein array at Machichie West, and mineralization at Machichie NE remain open in all directions.

The Company is pleased to announce the terms of a non-brokered private placement of up to 10,000,000 units of the Company at a price of $0.20 per Unit for gross proceeds of up to $2,000,000. Each Unit will consist of one common share in the capital of the Company and one common share purchase warrant. Each Warrant will be exercisable for two years following the closing of the Private Placement and will entitle the holder to purchase one Common Share at an exercise price of $0.30 in the first year following Closing, or $0.40 per Common Share in the second year following Closing.

The Company intends to use the net proceeds from the Private Placement for exploration and development activities, repayment of operating liabilities and general working capital purposes.

The Company is a junior resource company engaged in the identification, exploration and development of mineral properties, with a primary focus on gold properties located in Brazil. The Company has a 100% interest in the Cuiú Cuiú gold district located in the Tapajós Region, within the state of Pará in northern Brazil. Two main gold deposits have so far been defined at the Cuiú Cuiú project which contains National Instrument 43-101 compliant Indicated resources of 21.6Mt @ 0.87 g/t gold (604,000 oz) and Inferred resources of 19.8Mt @ 0.84 g/t gold (534,500 oz).