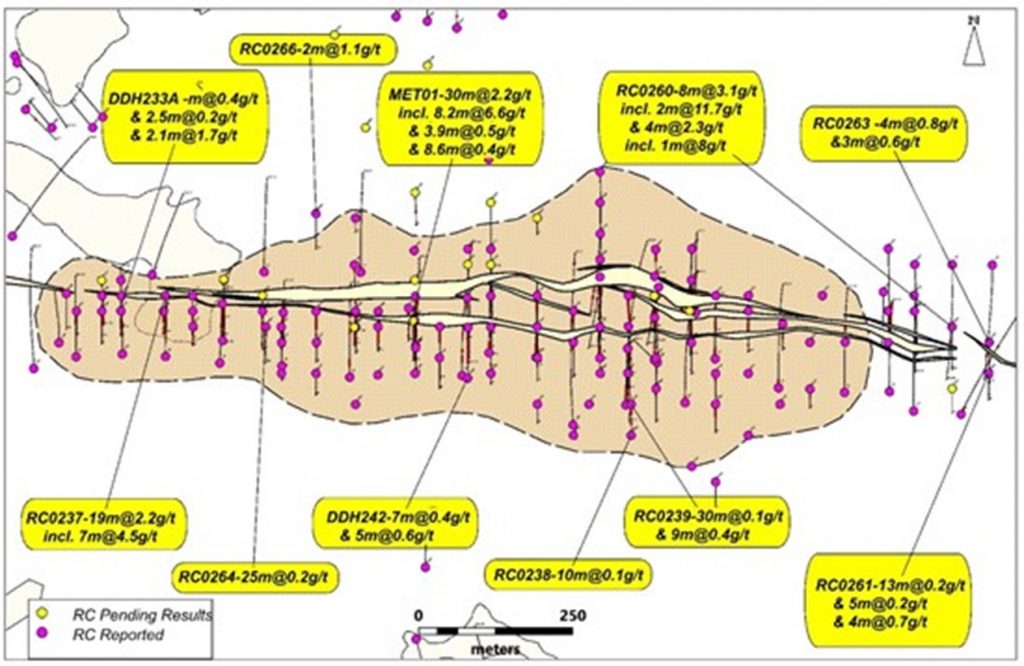 However, MET01 actually returned 30m @ 2.2 g/t gold from surface including 8.2m @ 6.6 g/t gold from 2.8m depth (Figure 2). These were significantly higher gold grades than anticipated based on previous results from RC65 and RC66. 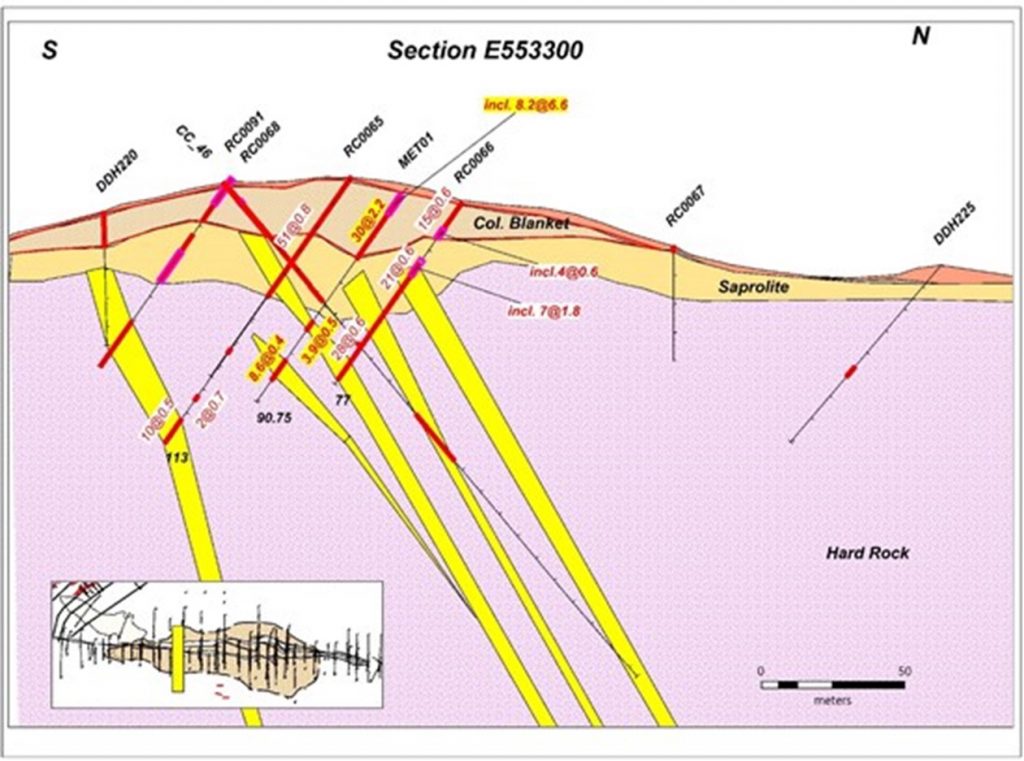 RC drill hole RC237 was drilled on section 552900 located in the western part of the MG gold deposit (Figure 1). Only one hole had previously been drilled on this section. Historic diamond-drill hole CC49 was drilled from north to south and cut a narrow zone of gold mineralization which returned 5m @ 1.9 g/t gold. More recent drilling at MG has confirmed that the primary basement MG gold deposit dips to the north, implying that CC49 may have been drilled sub-parallel to the dip of the deposit, and potentially too far to the north.

Two RC holes were drilled to test this possibility. RC191 returned 7m @ 0.5 g/t gold in the footwall, i.e. south of the historic intercept of 5m @ 1.9 g/t gold returned in CC49 (Figure 3). RC191 ended in mineralization and suggested the presence of a new mineralized zone. RC237 was drilled below RC191 to test this possibility and returned 19.1m @ 2.2 g/t gold from 85.0m depth, including 7.0m @ 4.5 g/t gold (Figure 3). The hole ended in mineralization and the zone remains open. This intercept is now interpreted to be the western extension of the main mineralized zone at the primary MG gold deposit, and has significant implications for the continuation of the main mineralized zone further west. 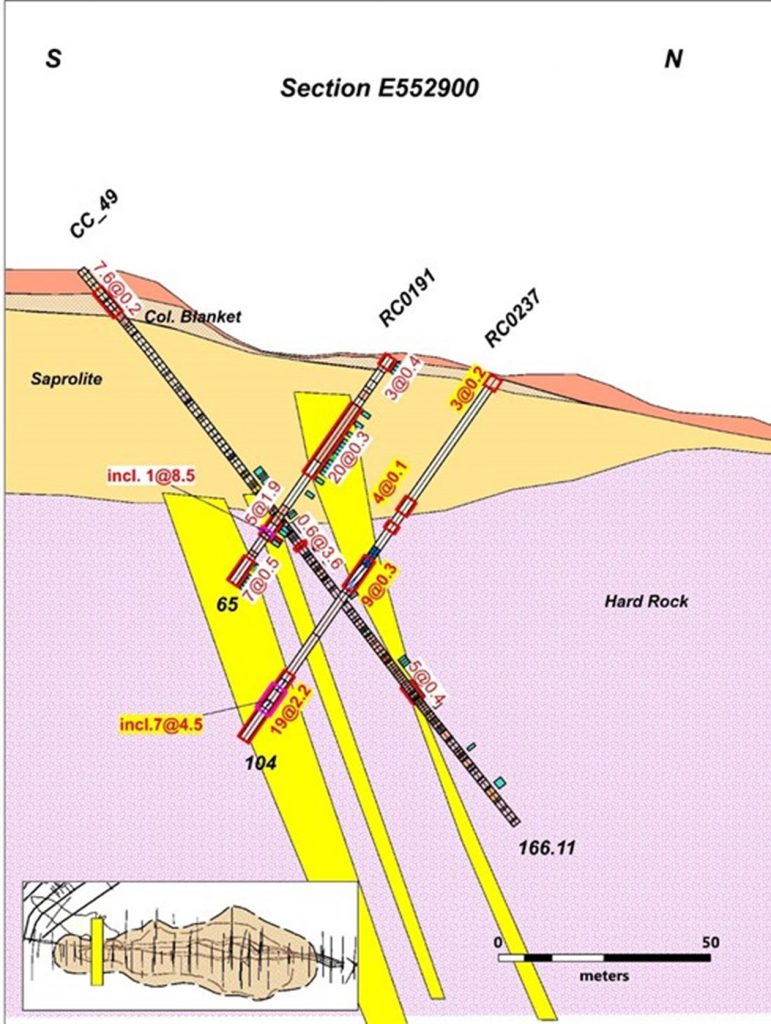 Figure 3: Cross-section (552900) through the primary MG gold deposit showing drill results from RC237. Note that hole ends in mineralization, and that historic hole CC49 was drilled down-dip in hanging wall 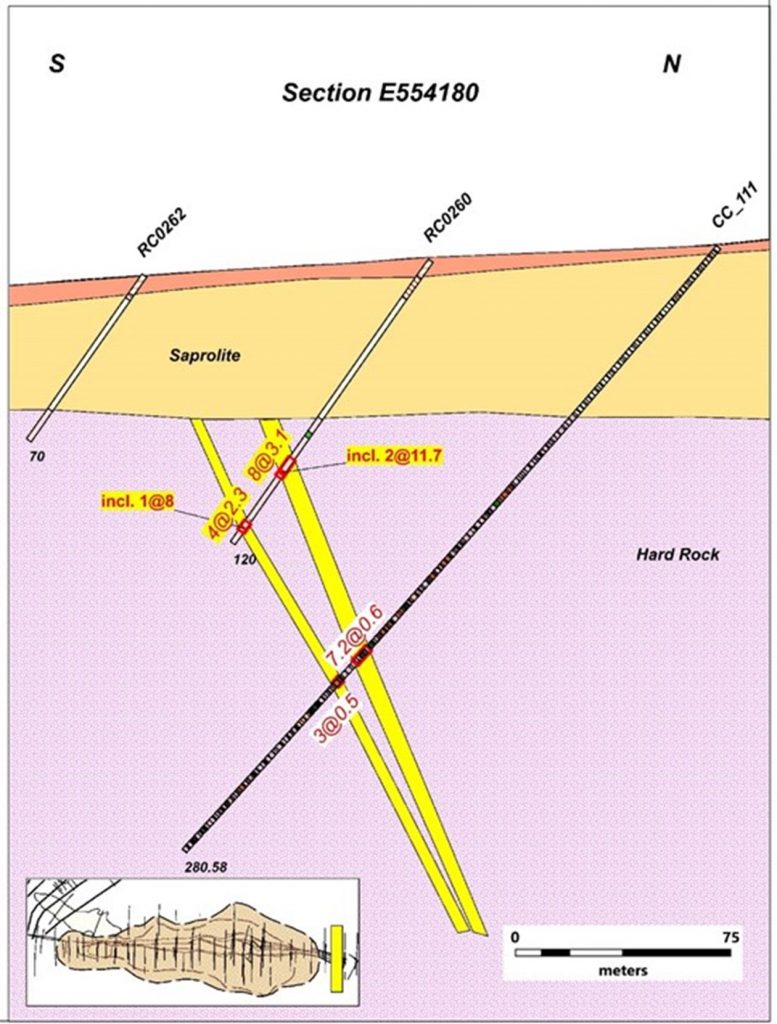 Diamond drilling at MG is continuing with results pending on an additional nine diamond drill holes.

Diamond drilling is continuing at the primary Central gold deposit. The seventh hole is currently in progress from a total program of 43 planned diamond-drill holes. These are designed to further define the high-grade zones at Central. Previous diamond drilling at Central included 220.7m @ 2.0 g/t gold including 9.8m @ 17.9 g/t gold.

RC drilling at Central is in progress with the objective of testing for the presence of gold-in-oxide blanket mineralization above the primary Central gold deposit. Results are currently pending on seven holes.

Diamond drilling continues at the PDM target, located 2.5km NW of the Central gold deposit, and is aimed at testing for the presence of a primary gold deposit in the basement intrusive rock underlying the gold-in-oxide blanket. Results are currently pending on six diamond-drill holes.

Geosedna has completed the 10,000m RC drilling contract and drilling with the large RC rig has been suspended as a result of the onset of the rainy season. Drilling will continue with the four other drill rigs currently on site.