Alan Carter, Cabral’s President and CEO commented, “Following the identification of the initial gold-in-oxide blanket in unconsolidated material above the MG gold deposit at Cuiú Cuiú, we have moved swiftly to define the limits to this new mineralized zone and drilled a total of 52 holes to date from the planned 74-hole program. The results reported here continue to confirm the presence of an extensive gold-in-oxide blanket in unconsolidated material over an area of at least 400 x 500m, which is still open in several areas and is up to 50m in thickness, with excellent gold grades. The recent arrival of two additional diamond drill rigs will allow us to simultaneously test several high-grade and gold-in-oxide blanket targets at Cuiú Cuiú which is expected to generate significant news flow over the next few months.”

Following the discovery of an extensive gold-in-oxide blanket in near surface unconsolidated material directly above the MG gold deposit in April of this year (see press release dated April 15, 2021 and Figure 1), Cabral has moved swiftly to define the limits to the mineralization and thus far defined a blanket up to 50m in thickness over an area of approximately 400 x 500m (Figure 2). 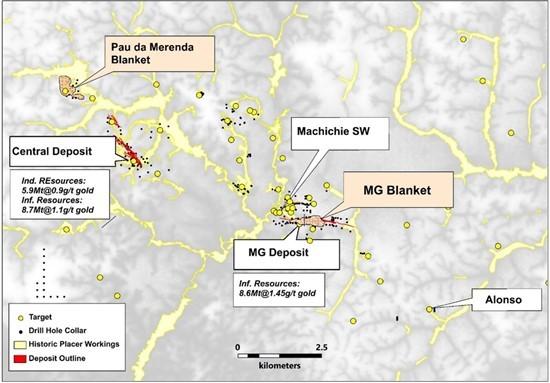 Figure 1: Map showing the location of the MG deposit and overlying MG gold-in-oxide target, as well as the Central gold deposit, the Pau de Merenda (PDM) gold-in-oxide blanket and other key targets within the Cuiú Cuiú district

A total of 52 holes of a planned 74-hole RC program designed to define this blanket have been completed thus far and the assay results are reported here for seven additional RC holes. Assay results are pending on 31 of the 52 completed RC holes drilled to date. 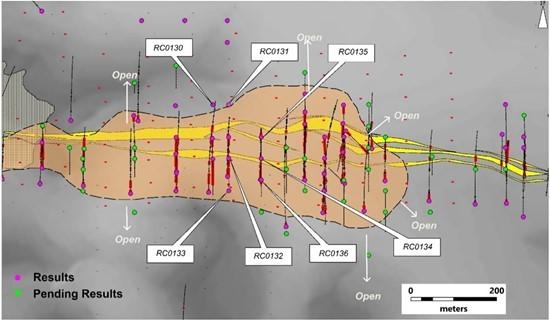 Figure 2: Map showing the MG deposit (in yellow) together with the overlying MG gold-in-oxide blanket (in beige) and RC holes 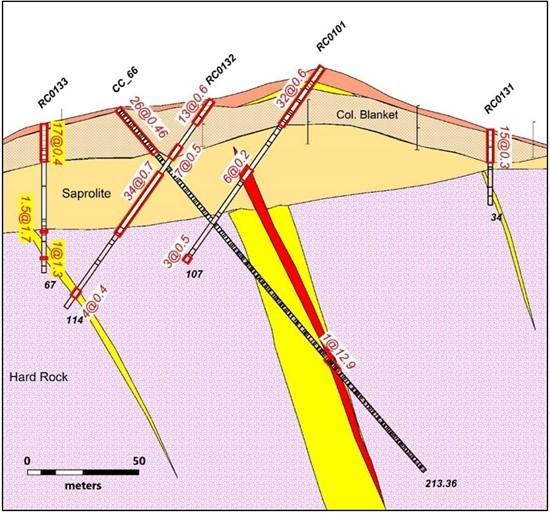 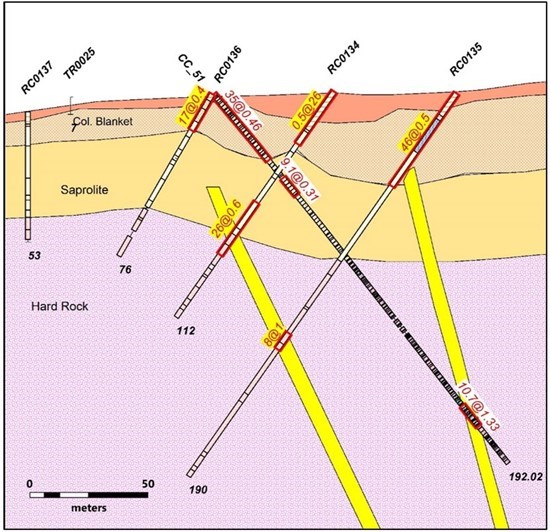 Results are pending on six follow-up RC holes which were recently completed in the Machichie SW vein array where six NE trending high-grade veins have been identified 300m north of the MG gold deposit. Limited previous drilling from this area has returned high-grade drill results including 3.4m @ 36.9 g/t gold and 3m @ 13.2 g/t gold.

One of the new diamond drill rigs is currently in the process of drilling six follow-up holes at Pau de Merenda where an extensive gold-in-oxide blanket was recently identified which is still open in several directions. This blanket is approximately 300 x 800m in size and still open in several directions. The presence of such an extensive blanket begs the question as to where this gold is being eroded from.

Diamond drilling is also in progress at the Alonso target which is located 3km SE of the MG gold deposit. Twenty-three samples of this boulder float material previously returned gold values of 11.6 to 200.3 g/t gold (see press release dated February 11, 2020). Shallow follow-up RC drilling conducted during late 2020 however failed to determine the source of the boulders due to high water in-flows. The current program of diamond drilling is designed to rectify those technical issues.

The Alonso target is located in low lying ground which is marshy during the wet season hence restricting access and the current program of six holes is being conducted during the dry season with a more suitable diamond drill rig.