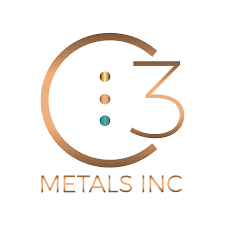 C3 Metals Inc. (TSX-V: CCCM) is pleased to announce that, further to its press releases of October 19, 2021 and October 21, 2021, it has closed the bought deal private placement through the issuance of 101,582,178 common shares in the capital of the Company at a price of C$0.19 per Share for gross proceeds of C$19,300,614, which includes the partial exercise of the over-allotment option.

The Offering was conducted pursuant to the terms and conditions of an underwriting agreement entered into between the Company and a syndicate of underwriters led by Canaccord Genuity Corp. as lead underwriter, and including Haywood Securities Inc. and Beacon Securities Limited.

All securities issued in connection with the Offering are subject to a statutory hold period of four months and one day from the date of issuance. The Offering is subject to the final acceptance of the TSX Venture Exchange.

C3 Metals Inc. is a Canadian-based exploration company focused on the discovery and development of large copper-gold deposits with properties in Peru, Jamaica and Canada.

The Company’s flagship project is the Jasperoide high-grade copper-gold skarn and porphyry system located in the prolific Andahuaylas-Yauri Mineral Belt of southern Peru. Mineralization at Jasperoide is hosted in a similar geological setting to nearby major mining operations at Las Bambas (MMG), Constancia (Hudbay) and Antapaccay (Glencore). Drilling commenced in February 2021, returning high-grade copper-gold mineralization over significant thicknesses. The ongoing program has been expanded to test multiple geophysical targets.

In Jamaica, the Company’s 100% interest licenses cover 207 km2 of highly prospective copper-gold terrain where multiple porphyries have been delineated. The Company is advancing fieldwork on new areas of interest. In Canada, C3 Metals holds a 100% interest in the 91 km2 Mackenzie porphyry copper-gold project within the Cascade Magmatic Arc in southwestern British Columbia.