Bullfrog Gold Receives Assays on 6 Remaining Holes at Its Project in the Bullfrog Mining District of Nevada, Including 61 Meters of 0.78 g gold/t and 35 Meters of 0.44 g gold/t

Bullfrog Gold Receives Assays on 6 Remaining Holes at Its Project in the Bullfrog Mining District of Nevada, Including 61 Meters of 0.78 g gold/t and 35 Meters of 0.44 g gold/t 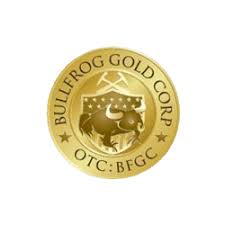 Bullfrog Gold Corp. (OTCQB:BFGC) (CSE:BFG) (FSE:11B)  announced assay results from the six remaining holes of the 25 total holes recently drilled at its Bullfrog Project. The Project comprises 2,125 hectares (5,250 acres) of strategic lands, established resources and prospective exploration potential in the Bullfrog Mining District located 4 miles west of Beatty, Nevada (200 km northwest of Las Vegas, Nevada). The Bullfrog and surrounding area are in one of the most prolific gold exploration regions in North America that includes significant activities by neighboring AngloGold, Kinross Gold, Coeur Mining and Corvus Gold. The Company has commanding land and resource positions in the Bullfrog mine area and obtained Barrick Bullfrog Inc.’s (Barrick) large database, including detailed information on 250,000 meters (155 miles) of drilling in the area.

Dave Beling, BFGC CEO, stated, “The drill assay results achieved our objectives to further define  resources and ultimate limits of proposed expansions to the Bullfrog and MS pits. The program also fulfilled a final work commitment for the Company to purchase a 100% interest in lands under lease from Barrick by mid-September 2020. The first two holes in the Paradise Ridge target did not intercept any significant mineralization, but this large undrilled area continues to be highly prospective and needs several more drill holes to fully explore and assess its potential that extends nearly 2,000 meters to the northwest.”

Table 1 shows the assay and drill data on the last hole of 17 drilled in the MH area and three additional holes drilled in the MS area. BH-20-19 intercepted two thick shallow intercepts, of which the nearest old holes are 38 meters north, 38 meters south and 20 to 50 meters down dip toward the west. The intercepts in the old wide-spaced holes were as much as 150 meters below the MH outcrops whereas the new intercepts ranged from 0 to 50 meters below the MH outcrops. The spacings of the 17 new holes, along with existing holes, are now adequate to convert most of the inferred resources previously estimated in the MH area to M&I classifications, and potentially expand overall MH resources within an optimized expansion of the Bullfrog pit.

Assays from the three remaining holes drilled in the MS area are described below and summarized in Table 1. All three holes were collared on the west MS pit rim and were angled 60o due east to test mineral projections dipping westerly below the pit. 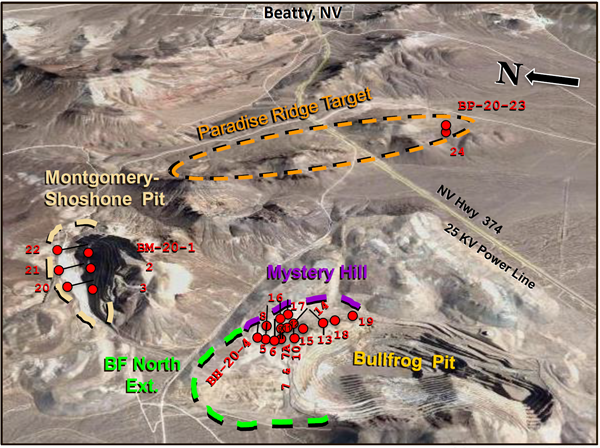 BM-20-20 was located to determine if the mineralization that was identified in several old holes continued along strike to the northeast and southwest and particularly up dip. The 12-meter intercept of 0.30 g/t is approximately 70 meters below the existing pit and may not add any resources within an optimized pit plan but was needed to define ultimate pit limits in that area.

BM-20-21 intersected 61 meters at 0.78 g gold/t and 7.25 g silver/t approximately 40 meters below the northern pit wall. The new intercept confirms continuity of mineral along strike as well as up and down dip, particularly in combination with the new drill assay data in holes BM-20-1, 2, 20 and 22 (see Figure 1) and a few intercepts in old, wide-spaced holes. The new intercept is in an area that previously was not in M&I resource estimates.

BM-20-22 intercepted 24 meters of 0.54 g/t starting at 45 meters below a 50-meter wide bench in the northeast end of the MS pit.  As a result, much of the stripping over the northeast extension of this intercept was completed by previous operators.  Laybacks of the pit walls toward the north and south will limit how far the MS pit can be deepened, but there now is enough information to optimize a pit plan and its ultimate depth. The new intercept is in an area that previously was not in M&I resource estimates.

The two holes drilled in the far south of the Paradise Ridge target did not intercept any significant mineralization. Notwithstanding, this target is approximately 2,000 meters long and 400 meters wide and these two holes tested a representative area of approximately 30,000 square meters, or less than 4% of the total prospective target area.  In this regard, the Company has engaged Dr. Tommy Thompson of Reno, a highly experienced and widely recognized authority on epithermal gold deposits to perform further analytical tests on samples of these two holes, conduct a field examination of the Paradise Ridge target and provide recommendations to facilitate and advance the exploration of the entire target.

Bullfrog Gold Corp. is a Delaware corporation that controls the commanding land and mineral positions in the Bullfrog Mine area where Barrick produced 2.3 million ounces of gold by mining and conventional milling beginning in 1989 and ending in 1999 when ore reserves were depleted. Measured and indicated (M&I) 43-101 compliant resources were estimated in mid-2017 by Tetra Tech Inc. at 525,000 ounces of gold, averaging 1.02 gold g/t in base case plans of the MS and Bullfrog pits, the latter of which included minor MH resources. Most of these resources are in the north extension to the Bullfrog pit. Inferred resources were estimated at 110,000 ounces of gold averaging 1.2 g/t, of which most were in the Mystery Hill area. It is noted that the 3-year trailing average gold price is now $170 higher than the $1,200 average price used in 2017. The resource estimates were also based on a heap leach gold recovery of 72% compared to the average 85% leach test recoveries recently achieved on four bulk samples.