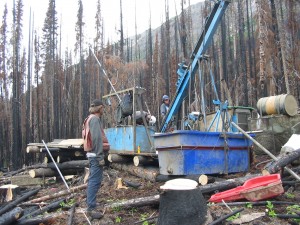 Mr. Rob McEwen, the founder and former Chairman and CEO of Goldcorp Inc. and founder and Chief Owner of McEwen Mining, will subscribe for 10,000,000 Units ($1M) of the total offering amount.

“We are very excited to have Mr. Rob McEwen as a shareholder of Brixton Metals; this is a further endorsement to Hecla’s support of our Thorn project,” stated Chairman and CEO, Mr. Gary R. Thompson. “We are looking forward to drilling this fall as we advance the high-grade mineralized zones towards a defined resource.”

Hecla Mining Company is exercising its pre-emptive right under the Private Placement in order to maintain its pro-rata interest in the Company pursuant to the terms of an ancillary rights agreement between Brixton and Hecla dated February 26, 2013. As a result, a wholly-owned subsidiary of Hecla will subscribe for 360,730 Shares at a price of $0.075 per Share and 2,483,106 Units at a price of $0.10 per Unit for aggregate gross proceeds of approximately $275,365. On closing, Hecla will own approximately 19.8% of the Company’s issued and outstanding common shares. Pricing of the Shares was determined in accordance with the terms of the Ancillary Rights Agreement.

All securities issued pursuant to the Private Placement will be subject to a four month and one day hold period.

The closing date for the Private Placement will occur on October 11, 2013, or such later date as may be required. The proceeds from the Private Placement will be used to fund exploration activities at the Company’s Thorn property and general working capital. On closing, finder’s fees totalling $70,000 in cash and 700,000 non-transferable finder’s warrants will be paid and issued in accordance with the policies of the TSX Venture Exchange.

About Brixton Metals Corporation and its Thorn Project

Brixton Metals is an exploration company focused on the advancement of high-grade precious metal assets to feasibility.  The primary focus at the Thorn project is high-grade silver-gold-lead-zinc-bearing diatreme-breccia zones and high-grade gold-silver-copper veins.  Secondary targets include porphyry, skarn, replacement, and bulk tonnage gold targets.  The Thorn project covers a Jurassic to Cretaceous volcanic-porphyry complex that shares similarities with other high sulphidation deposits around the world such as Lepanto-FSE in the Philippines, Penasquito in Mexico and El Indio in Chile.  The 27,000-hectare Thorn Project is located in the Sutlahine River area of Northwestern British Columbia, Canada, approximately 40 km from Chieftain’s Tulsequah Chief mine development.