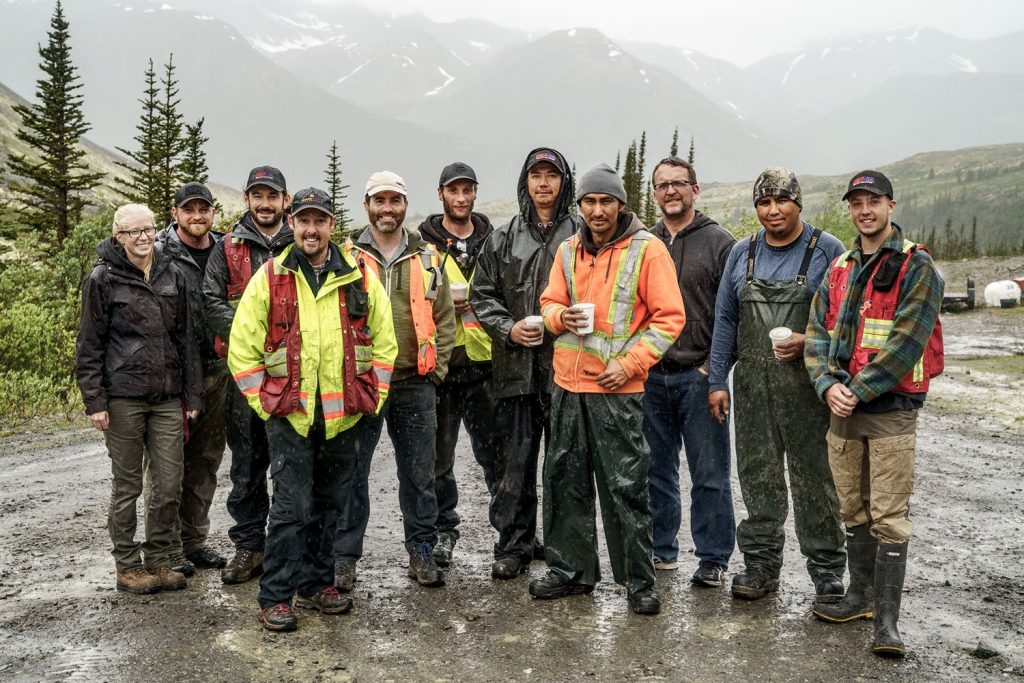 Mr. Market never disappoints, the cycle between market darling and bottom dweller is continuous and really doesn’t discriminate – everyone is afflicted at some point. The key is to find the companies that are currently bottom dwellers, but truly deserve to be valued as market darlings.

More on this point, a few years ago, while attending a resource sector investment conference, I heard Rick Rule say, and I’m paraphrasing,

“In the short-term, the market is a voting machine and in the long-term, it’s a weighing machine.”

Today, I have for you some comments on a sector and, more importantly, an investment thesis on a company which I believe is tremendously undervalued. The sector is zinc and the company is Fireweed Zinc.

One of the hottest metals markets to be invested in over the last 5 years has been zinc. From its low in late 2015, to its high in early 2018, the zinc price more than doubled and, with it, brought a ton of attention to the junior zinc companies.

The zinc price strength was derived by supply constraints as a number of mines and smelter facilities closed or had their production suspended. 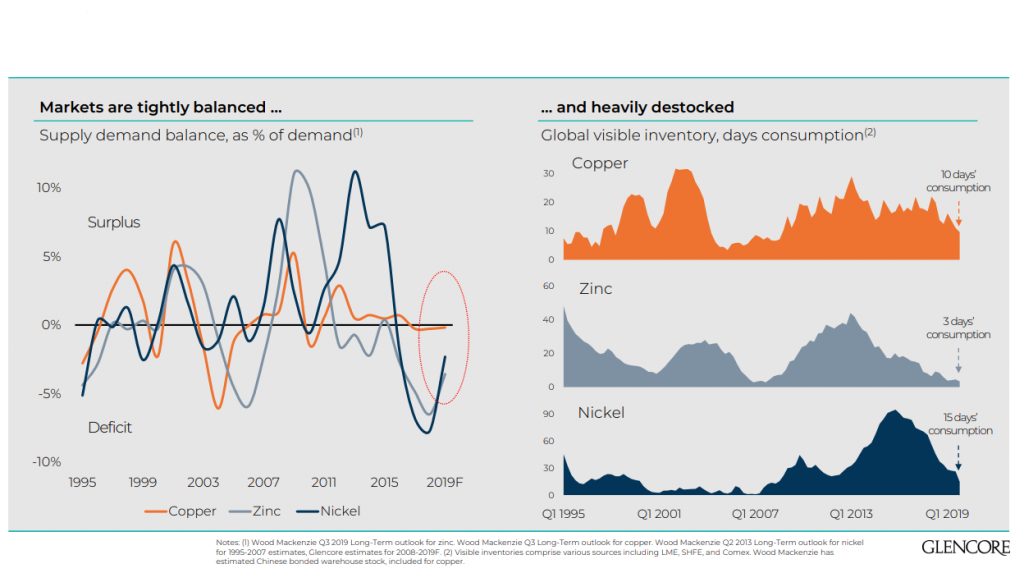 Glencore has a great graph, in their most recent corporate presentation, of the current global metal inventories of copper, zinc and nickel. All of which remain low, zinc in particular sits at 3 days of consumption – which, I think, many would equate with price strength, not weakness.

Today, however, the zinc price has fallen drastically from its highs above US$1.50/lbs and is sitting at roughly US$1/lbs.

This major fall in the zinc price has brought many of the junior zinc company share prices with it, and I believe it gives investors a great buying opportunity, if you choose wisely.

FD – 44.7 million (only a small amount of warrants outstanding)

NOTE: Teck was the lead order in the $5 million private placement early in 2019, purchasing 2.1 million shares for an investment of $1.75 million. Also, RCF topped up their position purchasing $750K worth of shares.

So why invest in Fireweed Zinc?

Besides a tight share structure and good strategic ownership, I think investment in Fireweed at its current MCAP comes down to 2 main points: its people and project.

First and foremost, the investment thesis starts with CEO, Brandon Macdonald. Brandon is a geologist by trade and has a very good educational background with an MBA from Oxford. Now, I don’t personally know Brandon as well as I would like to, but I do have a couple of friends that know him very well and speak very highly of him – which is good enough for me.

Additionally, in my opinion, the fact that Brandon is from the Yukon or, more specifically, Ross River, I believe this is an X-Factor and something that will pay huge dividends in the future.

Another important factor in the Fireweed story is its association with Discovery Group.  In fact, co-founder and principal at Discovery Group, John Robins, is the Executive Chairman and brings a history of success in the Yukon, ie. Kaminak Gold, and an extensive rolodex which opens doors to both capital and  technical knowledge.

To start, let’s take a look at the 2018 PEA figures for perspective:

These are some great numbers and really separate the MacMillan Pass Project from the rest of the pack of other undeveloped zinc projects worldwide.

It starts with the size of the Tom and Jason deposits, which have a combined indicated and inferred resource of over 50 Mt.

The impact of having such a large resource has a trickle-down effect on the rest of the important aspects of the project and, most importantly, I think, allows for a long mine life, giving a would-be buyer the chance to be right about the economic viability of the project over its lifetime.

One of the issues of a shorter mine life is that they have to be developed at the proper time or they risk being ready or in production, over the majority of their life, during a metal price environment which is uneconomic.

There are a couple of size comparisons for Fireweed, but each is valued much higher by the market. Now, not every pound or ounce of metal is created equal, I totally agree. In this case, however, I think the market has it wrong.

If you do your research on the undeveloped zinc companies worldwide, you will find that a large portion have completed economic studies using a zinc price between US$1.20 and US$1.30 per pound.

Therefore, you need to chose right if you’re going to invest in a zinc company, because  when the zinc market does eventually come back, it’s going to be the best projects out of that grouping which are going to be acquired or developed.

So what’s going to separate the wheat from the chaff?

It could be a number of different things, from jurisdiction to upfront capital cost, to acquisition cost, to economics. The location of each project can’t be changed and, therefore, I think the best companies will separate themselves by continuing to improve their projects, by increasing NPV / IRR and, ultimately, trying to reduce the metal prices that they require for an adequate return on capital invested.

Personally, I think that zinc companies that have a silver component to their deposit stand a good chance of standing out from their peers given the outlook for precious metals in 2020.

Now, I won’t be hanging my hat on this for the basis of my investment; speculating in metal price movements is not a good reason to buy a junior resource company.

Fireweed, however, does have close to 60 Moz of silver, which is large and fairly rare if you look around the junior resource space. High silver prices could be icing on the cake to the Fireweed investment thesis, if it were to head above US$20/oz.

Thus far, all of the information regarding MacMillan has been with reference to the Tom and Jason Deposits. Another ace up CEO Macdonald’s sleeve, however, could come from the Boundary Zone. 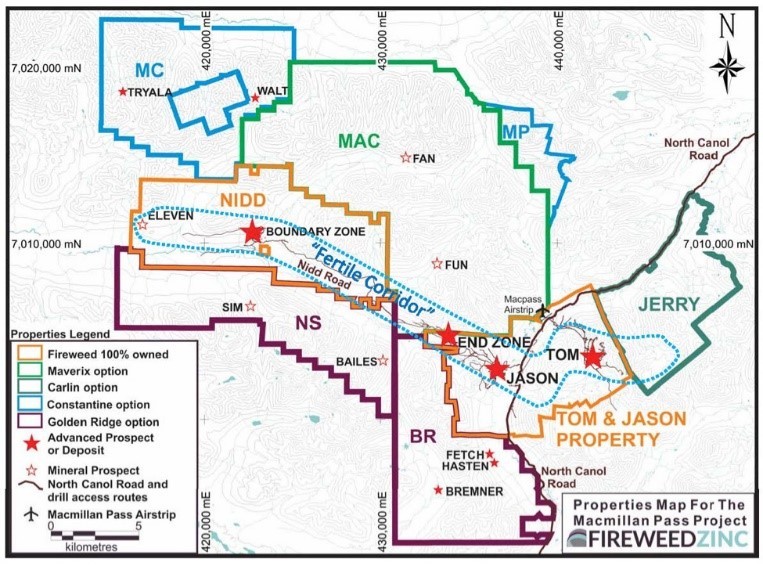 Over the last couple of months, I have been pleasantly surprised with the drill results that have come from the Boundary Zone. They are highlighted by:

These are great results and near surface to boot. The Boundary Zone has the potential to be a real difference maker in the size and production profile of MacMillan, moving forward.

Additionally, the company is testing XRF ore sorting technology, which would, theoretically, be used in conjunction with the mining of the Boundary Zone, thus feeding the mill with high grade ore, in-conjunction with that which is being produced from Tom and Jason.

Unlike metal price predictions, I will speculate that this is going to improve the NPV of the MacMillan project and, therefore, is a big part of the investment thesis in Fireweed.

In many cases, junior resource companies have a period in which they proverbially fall from grace in the eyes of the market. In many cases, it’s warranted, as the company eventually reaches its intrinsic value of 0. In special cases, however, value investors can find a diamond in the rough.

In my opinion, Fireweed Zinc at its current MCAP is a diamond in the rough and is why I recently bought shares.

Now an investment in Fireweed isn’t without risk.

The first risk is Fireweed’s cash position. Currently, they have roughly $1 million, which is not enough to do anything highly impactful. Dilution at such a low MCAP is not ideal, but may be necessary. Personally, I would like to see Teck and RCF be lead orders in the next placement in 2020.

The second risk is the zinc price; further weakness in the price could put Fireweed into neutral. As I mentioned earlier, however, almost the whole undeveloped zinc market would be in the same boat and, therefore, I’m happy to stick with the best undervalued issuer.

Finally, I think it’s justified to be skeptical on the Yukon. It’s a great jurisdiction in many respects and there has been success with Victoria Gold now a producing gold mine. But, a large primary base metal project is a different beast altogether.

In the end, I think that MacMillan has the right location in terms of accessibility to make it work and, therefore, I think the risk is noted, but not detrimental to its development.

NOTE: See BMC Minerals, who are in the final stages of permitting their primary zinc project, which is located in close proximity to the MacMillan Pass Project.

In closing, I’m a buyer and am bullish on Fireweed.

First, because of the people. Brandon Macdonald is a smart and trustworthy man, who is at the very beginning of what I think will be a long and successful career in the mining industry.

Moreover, he is supported directly by an Executive Chairman, John Robins, who has a stellar resume from his more than 35 years in the business.

Second, I believe the MacMillan Pass project is in a class of its own, especially given its current valuation. It’s a large deposit, and given the success with step out drilling at the Tom deposit, and arguably more importantly, the great results from the Boundary Zone, I think it’s about to get a whole lot better in the future.

Disclaimer: The following is not an investment recommendation, it is an investment idea. I am not a certified investment professional, nor do I know you and your individual investment needs. Please perform your own due diligence to decide whether this is a company and sector that is best suited for your personal investment criteria. I have NO business relationship with Fireweed Zinc or any other company mentioned in this article. I do own shares in Fireweed Zinc.