Bravada Gold Corporation (TSX-V: BVA) (FSE: BRTN) (OTCQB: BGAVF) reports assays for the first batch of seven In-fill and Expansion reverse-circulation holes drilled at the Company’s wholly owned Wind Mountain Au/Ag Project in northwestern Nevada. The recently completed program totaled 17 holes (2,186.8 metres) and consisted of: a) 13 holes (1,324.3 metres) into under-drilled portions of and potential extensions of the existing oxide resource near the Breeze open pit where shallow, higher-than-average gold and silver grades are expected based on geologic projections, and b) four holes (862.5 metres) at the Feeder Target to offset a vein zone encountered in hole WM20-102, which intersected 1.5 metres of 4.5g/t Au-eq (0.404g/t Au and 269.0g/t Ag) within a thicker interval of quartz veining with anomalous gold and silver mineralization.

1) Drill intervals of 20 feet or greater averaging greater than or equal to 0.300ppm Au or 0.150 ppm Au-eq as potentially above cut-off grade in open pit/heap leach in Nv.
2) R.C. drilling with entire sample crushed & puverized to create a 500-gram pulp with 30-gm FA/AAS for Au & 0.5gm ICP for Ag.
3) True thickesses not known, but expected to be ~70% or greater.
4) Caution: Ag recovery is highly variable in oxidized mineralization, thus 70:1 (Ag:Au) metal-price ratio for Au-eq probably significantly over estimates Au-eq for evaluating economics but useful for zoning. Tests needed to evaluate recovery variation by crush size, grade, etc.
5) Rounding errors converting from footages explain conflicts in intervals for metric intervals.

President Joe Kizis commented, “The purpose of this drill program was to validate our belief in the extension of the gold oxide resource in areas which were not mined when the property was in production by its previous owner. The geologic model for the shallow, oxide gold resource is validated, based on assay results from the first batch of drill results. The holes generally contain thicker and stronger gold and silver mineralization than projected into those areas for the 2012 Independent Resource Estimate, which was based on insufficient drilling available in 2012 for these areas and were thus given low or no resource estimates.

Holes WM21-108 and -109 are particularly exciting because they expand an area with similarly strong assays in nearby historic drill holes, suggesting the area is a possible up-welling zone from a feeder vein system at depth, which we will evaluate further via 3D modeling and possibly follow-up drilling later this year with the intention to obtain a current independent resource calculation of the expanded oxide gold resource of the property.” 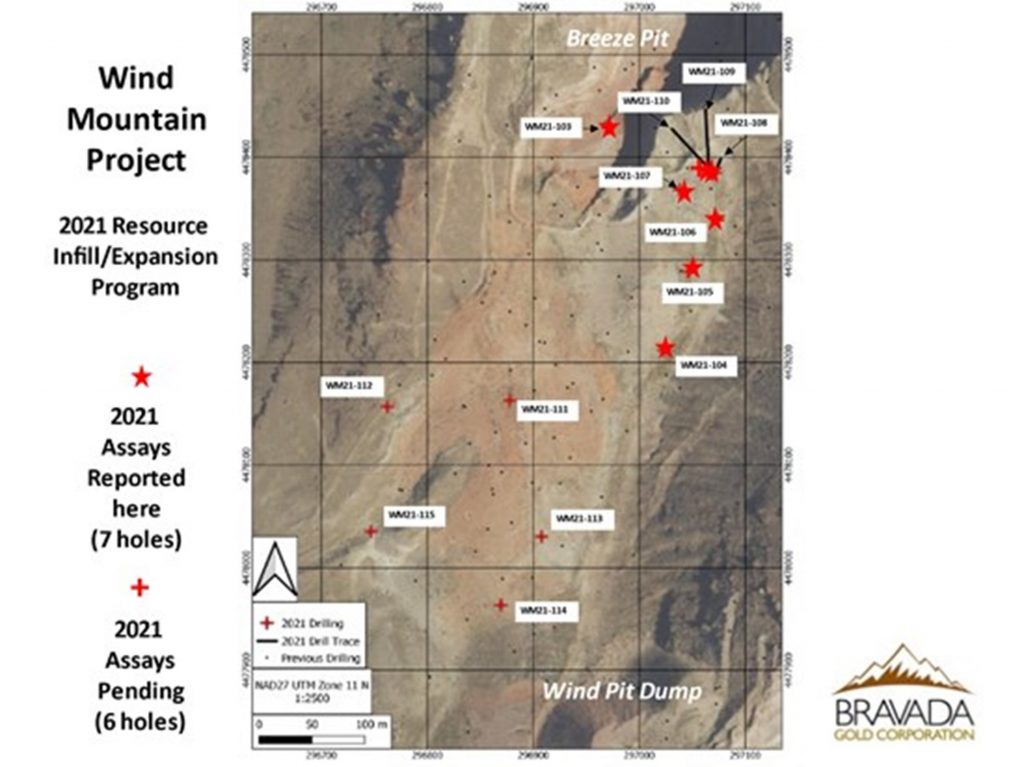