Bravada Gold Corporation (TSX-V:BVA) (OTCQB:BGAVF) has received approval for an amendment to its drilling permit, which was submitted in late September 2021. The extensive delay is believed to be related to Covid-19 staffing issues. After posting a small increase in bond, five new drill sites will allow deeper tests of the vein system that was discovered in Q4 2020 by drilling beneath mine waste and other overburden at the Feeder Target, in which hole WM20-102 intersected 1.5 metres of 269.0g/t Ag and 0.404g/t Au within a thicker interval of banded quartz veining together with anomalous gold and silver. Four reverse-circulation holes drilled in 2021 to further test this target extended the strike length of banded quartz veining to +300m beneath overburden but failed to test the vein system deeper than the WM20-102 high-grade silver intercept due to unexpected shallowing of 2021 drill holes. The new sites (see Figure 1) will allow a better drill orientation designed to intersect the vein zone at a deeper elevation (see Figure 2).

President Joe Kizis commented, “The banding seen in drill chips indicates that several stages of sealing and breakage occurred within the vein zone, which is important for developing high grades in low-sulfidation deposits. Silver is often enriched in the upper portions of these systems because gold typically is deposited preferentially deeper. Enriched silver to gold ratios returned from our recent drilling, along with observations of relatively low-temperature quartz vein mineralogy, indicate that our current drilling only tested shallow portions of the vein zone; therefore, we expect that major gold enrichment should lie at a deeper elevation. The upper portion of the hole planned from Site G will also test a possible shallow extension of disseminated resource.

Our theory that this vein zone should contain better gold grades than seen in the disseminated portion of the deposit is based upon two reasons; several low-sulfidation, disseminated gold deposits like Wind Mountain contain very high-grade gold in upwelling/feeder veins, and third-party research in 2014 demonstrated that even in disseminated portions of the Wind Deposit, tiny factures contain very high concentrations of gold, silver, and related metals (see Figure 3).

Our interpretation is that the ore-forming hydrothermal fluids carried high concentrations of gold and related elements but was poorly constrained in permeable and highly fractured sediments that were present at the upper levels of the system, resulting in wide dispersion of gold fluids with diluted metal grades. The Feeder target is a very attractive setting because gold-bearing fluids would have been concentrated into a major fault/vein zone that juxtaposed impermeable basement rocks on the southeast and variably permeable sediments and impermeable volcanic rocks on the northwest. Further concentration of precious metals to higher grades due to repeated sealing and breaking is indicated by banding in the veins.”

The Company’s 2021 Resource Upgrade drilling program demonstrated that higher grades exist in certain horizons predicted by our 3D model, providing confidence to better model and expand these higher-grade zones during our planned 2022 update to the 2012 Resource and PEA. A portion of the resource containing the highest grades is categorized as Indicated Resource, which is acceptable for Pre-feasibility Studies that could upgrade a portion of the Resource to the Probable Reserve category, and which may be developed near-term into Phase I, or Starter, open-pit/heap-leach mining operation. Features which will contribute to a potentially attractive Phase I operation include: very low strip ratio, higher grades than predicted by the 2012 PEA, excellent logistics and snow conditions, sparse and supportive local population, lack of sage-grouse habitat, potential access to nearby “green” geothermal energy for operations, and potential post-mining “green” solar and wind energy usage. A resource update is now expected by late Q2 or early Q3 2022. 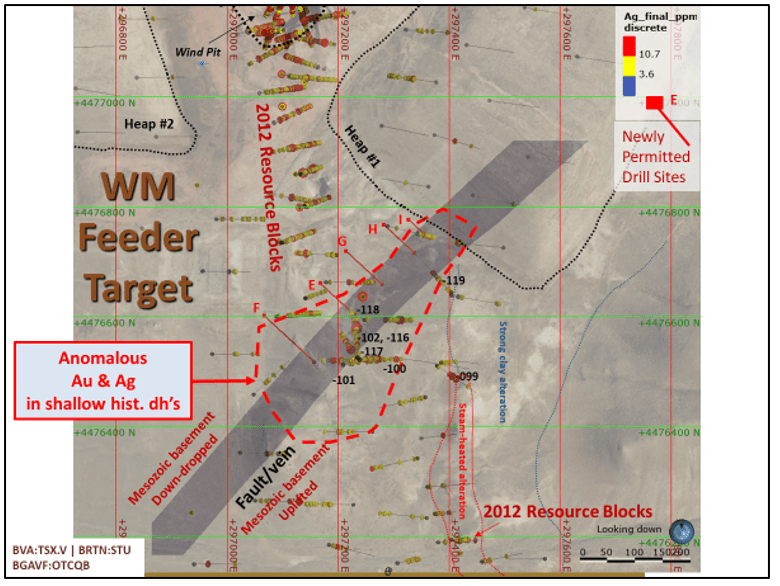 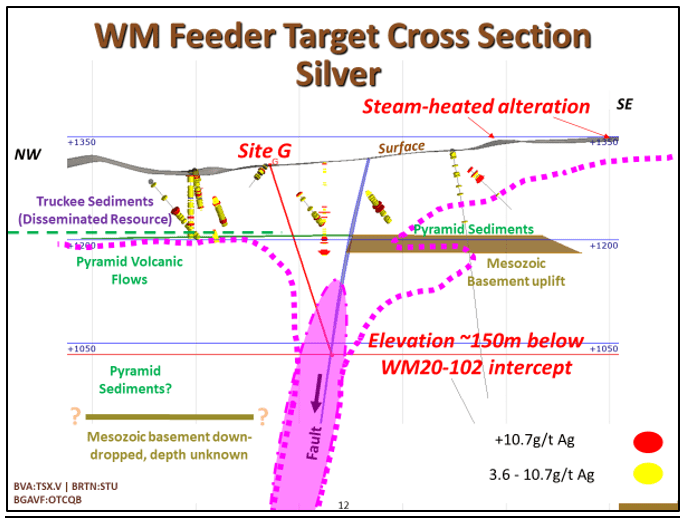 Figure 2. Drill site G tests the projection of the quartz vein zone approximately 150m below the elevation of the WM20-102 high-grade silver intercept. The upper part of this hole also tests an undrilled extension of 2012 disseminated gold resource blocks. 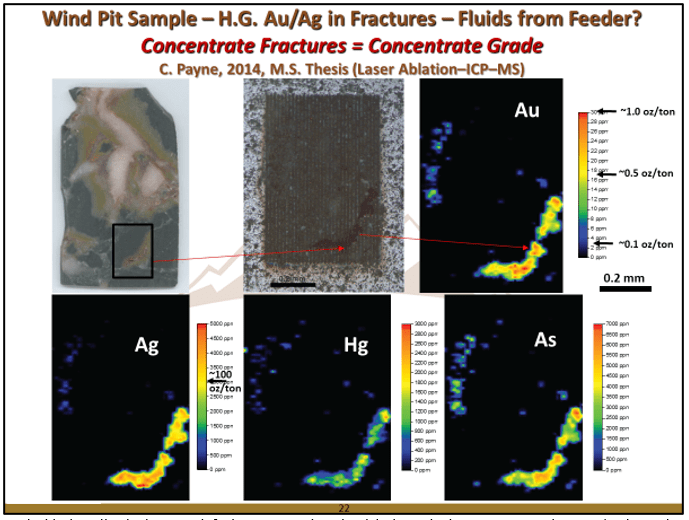 Figure 3. The black outline in the upper left photo was cut into the slab shown in the upper center photo, and point analyses for gold, silver, mercury, and arsenic are shown in the other photos. The sample was collected from the Wind Pit. Note the very high grades in factures with dramatically lower concentrations between fractures.

The Wind Mountain Property is an historic past-producing, bulk-tonnage gold-silver mine located in northwestern Nevada approximately 160km northeast of Reno in a sparsely populated region with excellent logistics, including County-maintained road access and a power line to the property. An independent resource estimate and Preliminary Economic Evaluation for Wind Mountain commissioned by Bravada in 2012 reported:

Bravada is an exploration company with a portfolio of high-quality properties in Nevada, one of the best mining jurisdictions in the World. Bravada has successfully identified and advanced properties with the potential to host high-margin deposits while successfully attracting partners to fund later stages of project development. Bravada’s value is underpinned by a substantial gold and silver resource with a positive PEA at Wind Mountain, and the Company has significant upside potential from possible new discoveries at its exploration properties.

Since 2005, the Company signed 32 earn-in joint-venture agreements for its properties with 19 publicly traded companies, as well as a similar number of property-acquisition agreements with private individuals. Bravada currently has 10 projects in its portfolio, consisting of 810 claims for approximately 6,500 ha in two of Nevada’s most prolific gold trends. Most of the projects host encouraging drill intercepts of gold and already have drill targets developed. Several videos are available on the Company’s website that describe Bravada’s major properties, answering commonly asked investor questions. Simply click on this link https://bravadagold.com/projects/project-videos/ .