Bravada Gold Corporation (TSX-V: BVA) (FSE: BRTN) reports assays for the final 10 In-fill, Expansion, and Exploration reverse-circulation holes drilled at the Company’s wholly owned Wind Mountain Au/Ag Project in northwestern Nevada. The recently completed program totaled 17 holes (2,186.8 metres) and consisted of 13 holes (1,324.3 metres) into under-drilled portions of and potential extensions of the existing oxide resource near the Breeze open pit and four holes (862.5 metres) at the Feeder target to offset a vein zone encountered in hole WM20-102, which intersected 1.5 metres of 0.404g/t Au and 269.0g/t Ag within a thicker interval of quartz veining with anomalous gold and silver mineralization.

Assays from the final six holes of the Resource Upgrade program continue to provide additional encouraging results (see attached summary of drill intercepts). Nine holes of the 13-hole program returned near-surface, thick zones of oxidized gold and silver with higher grades than estimated for those areas in the 2012 Resource Estimate/PEA, confirming our 3D geologic model.

This program focused on a shallow portion of the 2012 Resource with strongly oxidized mineralization that is exposed in surface outcrops and in the small Breeze open pit (Amax 1990’s). Disseminated gold and silver mineralization occurs in multiple, gently south-dipping mineralized horizons, which were permeable horizons and possibly boiling horizons. Higher grades occur within the disseminated horizons along several northeast, north, and northwest fracture zones. Within these fracture zones are narrow intercepts of much higher grades of gold and silver mineralization, often with 1.5m and longer drilled intervals returning 1 to +10 grams gold per tonne (g/t) and 50 to +300g/t silver.

President, Joe Kizis, commented, “We are pleased that this phase of the Resource Upgrade program successfully demonstrates that higher grades exist where our 3D model predicts. The holes provide higher confidence to model these zones for our planned Q1 2021 update to the 2012 Resource and PEA in an area that was largely categorized as Indicated Resource, a category that is acceptable for Pre-feasibility Studies, and which may be developed into a near-term Phase I open-pit/heap-leach mining operation.” 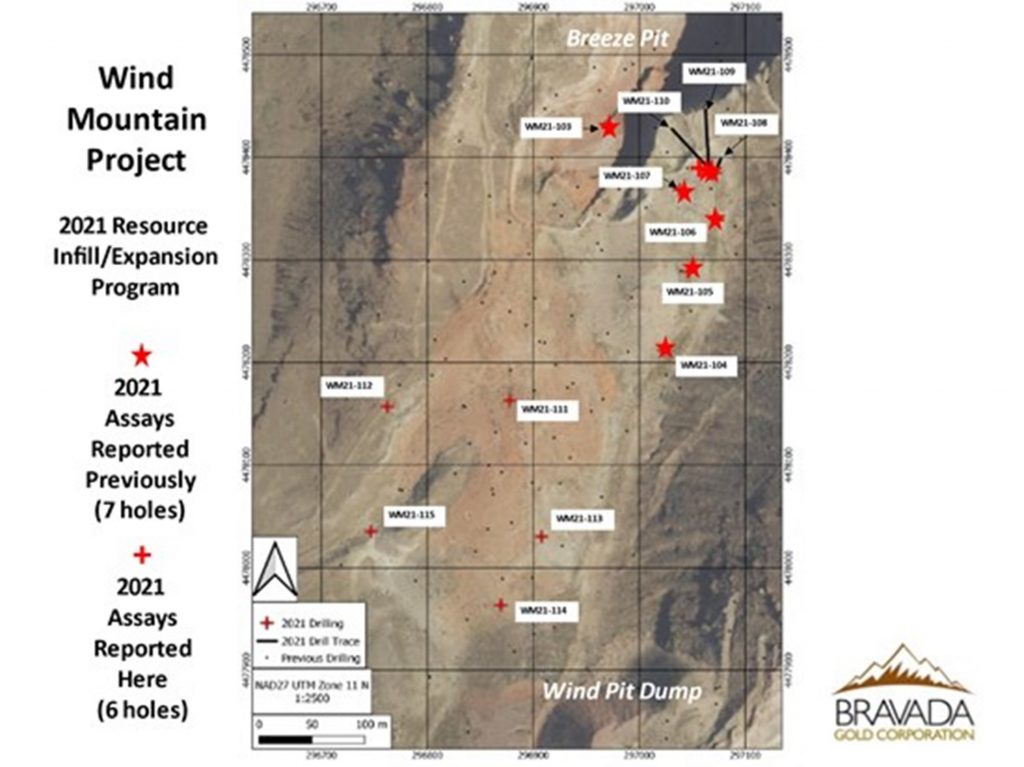 Four holes were drilled to offset a vein zone encountered in hole WM20-102, which intersected 1.5 metres of 0.404g/t Au and 269.0g/t Ag within a thicker interval of quartz veining with anomalous gold and silver mineralization. Hole WM21-116 was designed to test beneath the intercept in hole -102; however, the hole flattened significantly, testing much shallower and only intersecting moderately anomalous silver and gold. Hole WM21-117 also shallowed significantly and intersected only somewhat deeper than hole -102 with several 1.5m intervals of anomalous silver up to 54g/t Ag. Hole WM21-118 did not cross the fault but intersected narrow banded quartz vein zones with 1.5m intervals up to 78g/t Ag. Hole WM21-119 tested a projection of the fault/vein zone but unfortunately lost several samples crossing the zone; however, hole -119 did encountered anomalous values of gold and silver in banded low-temperature quartz veins at shallower levels than hole -102.

President, Joe Kizis, commented, “All four of the 2021 holes in the Feeder Target intersected banded quartz veins with anomalous selenium and precious metals beneath an intense halo of mercury and chalcedonic silica flooding. Zoning in geochemistry, alteration, and silica textures indicate upwelling hydrothermal fluids, but at a level above expected major gold deposition. Deeper testing of the banded quartz veins is justified, and new sites will need to be permitted. The upwelling zone constrained between impermeable Mesozoic metasediments and Tertiary volcanic rocks is a very attractive target for vein development.” 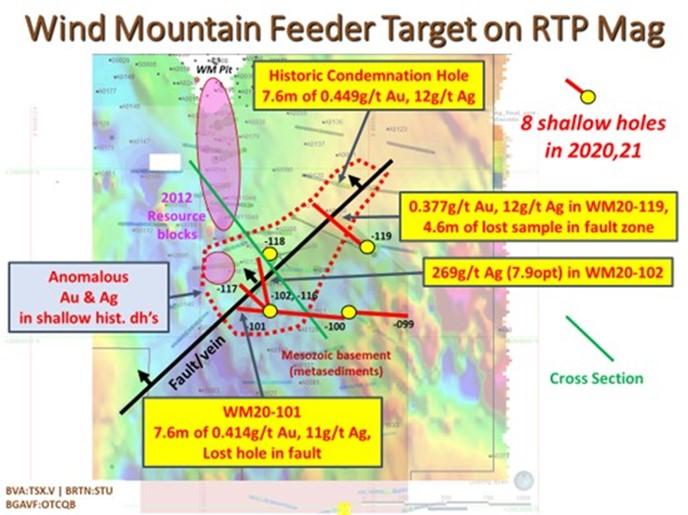 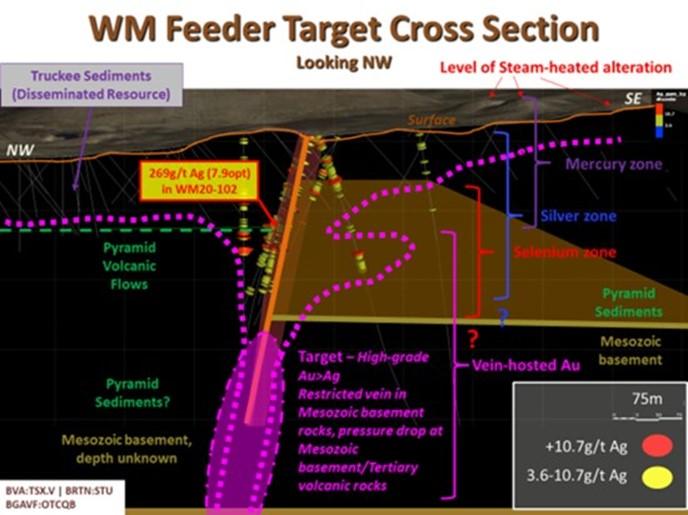 Joseph Anthony Kizis, Jr. (AIPG CPG-11513) is the qualified person responsible for reviewing and preparing the technical data presented in this release and has approved its disclosure