Bravada Gold Corporation (TSX-V:BCA) announces that drilling is underway at the Company’s 100% owned Wind Mountain gold/silver project in northwestern Nevada. Three or four reverse-circulate drill holes are planned to depths ranging from 360m to 580m as the first relatively deep test of the interpreted feeder zone of this large hydrothermal system.

The Feeder target is interpreted as the likely source of gold/silver-bearing hydrothermal fluids that deposited disseminated gold/silver previously mined in open pits by Amax Gold, as well as the remaining Resources defined by Bravada. Evidence for the target concept is from Amax’s shallow condemnation drill holes and from Bravada’s geological mapping, geochemical sampling, magnetic geophysics, and nearby 2017/18 deep drill holes. Disseminated gold and silver mineralization on the Wind Mountain property is exposed over a strike length of more than 6km, indicating a robust gold system that spread laterally over a large area within permeable host sediments; however, a high-grade “feeder” zone has not been discovered to date and that is the objective of this campaign. 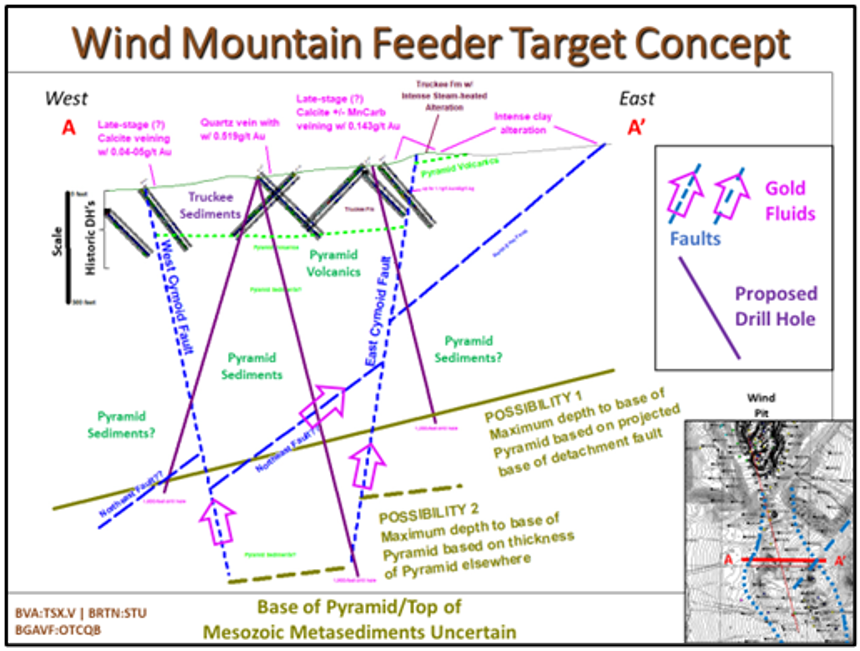 Since 2005, the Company signed 32 earn-in joint-venture agreements for its properties with 19 publicly traded companies, as well as a similar number of property-acquisition agreements with private individuals. Bravada currently has 10 projects in its portfolio, consisting of 810 claims for approximately 6,500 ha in two of Nevada’s most prolific gold trends. Most of the projects host encouraging drill intercepts of gold and already have drill targets developed. Several videos are available on the Company’s website that describe Bravada’s major properties, answering commonly asked investor questions. Simply click on this link https://www.bravadagold.com/en/management-videos.php.