Bravada & Coeur Sign LOI for the Quito Property in Nevada

Bravada & Coeur Sign LOI for the Quito Property in Nevada 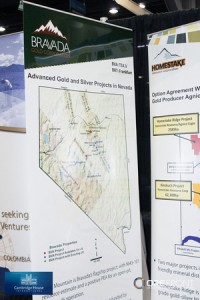 Bravada Gold Corporation (TSX-V:BVA) (FRANKFURT:BRT) has signed a Letter of Intent with Coeur Mining, Inc. for an option to earn into Bravada’s interest in the Quito Property. Quito is a past-producing gold property consisting of 342 claims (approx. 2,700 hectares) located in the Austin Gold trend in central Nevada. From 1986 through 1989, Quito reportedly produced 174,460 ounces of gold from 1.7 million short tons at an average grade of 6.34 grams per ton, which was approximately 60% of the originally published reserve. However, Bravada has not independently confirmed either the past production or any possible remaining resources, and these historic figures should not be relied upon.

Coeur may earn into Bravada’s interest in the Quito property, which can range from 49% to 100% as described below, over a period of five years by funding Bravada’s earn-in work commitments of US$2.5 million, making an initial cash payment of $10,000, cash payments of US$50,000 by 15 January 2016 and $50,000 on the first anniversary of the execution of a definitive Earn-In Option Agreement, reimbursing Bravada’s US$93,600 cash bond for Quito by the end of 2017, and paying Bravada an option purchase price of US$2 million. If Coeur acquires Bravada’s interest in the Quito property, Bravada will retain a 2% NSR royalty on Coeur’s percentage of production from the property. Coeur will commit to paying annual claim fees of approximately US$57,000 during each of 2015 and 2016, after which Coeur may terminate the agreement. Bravada will be operator of the work programs during the earn-in phase and will be entitled to charge Coeur an overhead fee of 10% on funds expended as part of the work program.

The underlying owner of the Property has agreed to modify provisions of the underlying agreement with Bravada to match the terms above. As per the underlying agreement and upon completion of work expenditures of at least US$2.5 million, Bravada will have earned a 70% interest in the Property and the underlying owner will have to choose one of the following three options: a) elect to accept participation at 30% (Bravada 70%); or b) if more than 2 million ounces of gold have been delineated by Bravada’s earn-in work, the underlying owner may elect to earn a 51% interest (Bravada 49%) by paying Bravada (or Coeur, if Coeur elects to purchase the option) 300% of the amounts expended to date on the exploration program (including the $2.5 million expenditure by Coeur and other amounts expended, including for real estate taxes, maintenance of claims and other holding costs) and funding Bravada’s portion of capital with repayment from 80% of Bravada’s portion of cash flow; or c) elect not to contribute additional capital to development of the Property, in which case Bravada would be obligated to buy the underlying owner’s 30% interest for either 500,000 shares of common stock of Bravada or US$500,000 cash at Bravada’s election, and the underlying owner would retain a 2% net smelter royalty. Coeur’s option with Bravada would allow it to acquire whichever level of interest Bravada has earned after the underlying owner makes its one-time election.

President Joe Kizis commented, “The Quito property contains an impressive number of high-grade gold intercepts in historic drilling. Mineralization is interpreted as a deeply eroded “Carlin” system and is higher grade and more structurally controlled than less eroded “Carlin” deposits. Bravada created the first extensive database of historic drilling at Quito, utilizing it to create a 3D model of mineralization and geology. Three high-priority targets have been identified for drilling by this work, and several other showings on this large property may develop into drill targets with further surface work. One of the targets is currently permitted for drilling and modification of the permit will begin soon to include other targets. Quito is a good example of how Bravada adds value to its projects through good science and persistence, leveraging its portfolio of properties through partnerships with high-quality miners and explorers.”

“For Coeur, Quito represents a high-quality project with good exploration potential in Nevada, a stable political jurisdiction where we have over 25 years of operating experience,” comments Hans Rasmussen, Vice President of Exploration for Coeur. “In our exploration program, we are slowly building our portfolio through the current market downturn so we have a long pipeline of projects on which to draw future cash-flow in a higher metal price environment. From my 30 years of experience in the Nevada gold trends, I believe Quito has several of the characteristics of sediment-hosted gold system, the discovery of which would fit well with our portfolio of mines.”

Bravada is a member of the Manex Resource Group of companies with an exploration office in Reno, from which it is exploring its extensive Carlin-type and low-sulfidation-type gold holdings strategically located within numerous productive gold trends in Nevada. Homestake Resource Corporation owns approximately 9.8% of Bravada’s 11,970,210 outstanding common shares.

Coeur Mining is the largest U.S.-based primary silver producer and a significant gold producer with five precious metals mines in the Americas employing approximately 2,100 people. Coeur produces from its wholly owned operations: the Palmarejo silver-gold mine in Mexico, the San Bartolome silver mine in Bolivia, the Rochester silver-gold mine in Nevada, the Kensington gold mine in Alaska, and the Wharf gold mine in South Dakota. The Company also has a non-operating interest in the Endeavor mine in Australia in addition to royalties on the Cerro Bayo mine in Chile, the El Gallo complex in Mexico, the Zaruma mine in Ecuador, and the Correnso mine in New Zealand. In addition, the Company has two silver-gold exploration projects – the La Preciosa project in Mexico and the Joaquin project in Argentina. The Company also conducts ongoing exploration activities in Alaska, Argentina, Bolivia, Mexico, and Nevada. The Company owns strategic investment positions in several silver and gold development companies with projects in North and South America.