Bravada Gold Corporation (TSX-V:BVA) (OTCQB:BGACF) reports that it has commenced reverse-circulation drilling at the Company’s 100% owned Wind Mountain gold/silver project in northwestern Nevada. The program will begin with approximately 1,400m of shallow in-fill holes within a higher-than-average grade portion of the existing oxide resource, which could evolve into a Phase I starter pit. Following the in-fill holes, approximately 600m will be drilled to explore deeper a potential feeder vein zone discovered in hole WM20-102, which intersected 1.5 metres of approximately 4.5g/t Au-eq (0.404g/t Au and 269.0g/t Ag) within a thicker interval of quartz veining with anomalous gold and silver mineralization.

The Company is re-assessing the shallow and oxidized, disseminated gold and silver resource on the Wind Mountain property, starting with in-fill drilling in several under-drilled areas that could inexpensively add higher grade resource. The goal is to complete an update to the resource and PEA by Q1 2022.

Following completion of the in-fill holes, the Feeder target will be tested beneath the silver-rich vein intersected in hole WM20-102. 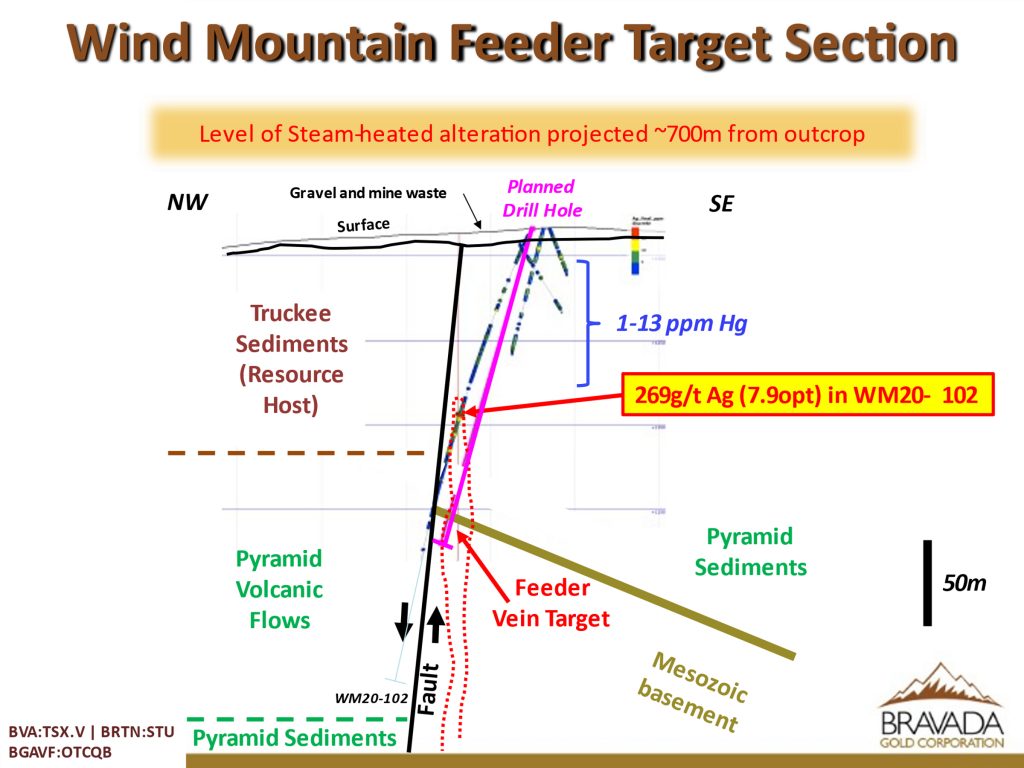 President Joe Kizis commented, “Veins are rare within the poorly consolidated sediments that host disseminated mineralization at Wind Mountain, and the vein zone intersected in WM20-102 is unusual in other ways. The vein zone includes hydrothermal breccia, which indicates strong hydrothermal activity often associated with boiling. However, the vein zone does not exhibit common boiling textures that are often associated with higher gold grades, suggesting boiling and significant gold deposition may have occurred deeper in the vein zone. Further evidence of higher gold grades deeper is the presence of finely disseminated silver sulfides and the ratio of silver to gold, which is much higher than usual for Wind Mountain. Based on our paleo-reconstruction, the depth of the vein zone intersected in WM20-102 is estimated to be less than 150 metres below the paleosurface, consistent with other observations of being in the shallow part of the mineralizing system with the strongest gold mineralization occurring deeper. The model will be tested where the vein zone cuts brittle rocks that should be favorable for more extensive vein development below the WM20-102 intercept.”