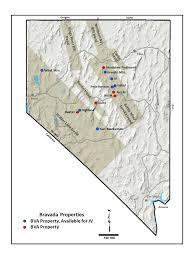 Kinross completed two phases of R.C. drilling at the Baxter property during 2016, which consisted of 41 holes for a total of 8,278 meters. The program resulted in the discovery of a new zone of shallow, oxide gold mineralization at the Sinter target and identified several target areas for additional exploration drilling. Hole BAX16-13 at Sinter, for example, intersected 6.1m averaging 2.199 grams gold per ton (g/t gold) beginning at 32m depth within a thicker interval of 32.0m averaging 0.880g/t gold (for details, see news releases NR-07-16 and NR-12-16). Other holes in the target area intersected gold mineralization at approximately the same horizon. Geophysical data for several target areas indicates that gold mineralization may be related to features not yet tested with drilling.

President Joe Kizis commented, “Baxter is a good example of our business plan to acquire projects with exploration potential for high-margin gold deposits and to conduct the work necessary to make them attractive to larger partners that can advance the projects via work programs to earn equity positions in the properties. Our partners spent approximately US$1.5million on Bravada’s properties in Nevada during 2016. That work resulted in the discovery of shallow, oxide gold mineralization at Baxter and in a refined high-grade gold target at Quito, where drilling is expected to begin in July.”

Kinross has the option to earn a 60% interest in the property by spending $2.0 million over five years and it can earn an additional 15% interest by spending an additional $2 million on exploration and development expenses over two additional years. Upon Kinross completing its earn-in, Bravada may contribute to expenditures at its percentage of interest or be diluted. Should Bravada’s working interest reduce below 10% as a consequence of Kinross contributing Bravada’s working interest share of agreed exploration program expenditures, Bravada would convert its working interest to a 1% NSR royalty (see NR-01-15 dated February 3, 2015).

Bravada is an exploration company with a portfolio of high-quality properties in Nevada, one of the best mining jurisdictions in the world. During the past 12 years, the Company has successfully identified and advanced properties that have the potential to host high-margin deposits while successfully attracting partners to fund later stages of project development. Currently, five of its Nevada properties are being funded by partners, which in aggregate include earn-in work expenditures of up to $6.5 million and payments to Bravada of up to +$3.0 million in cash and shares, with Bravada retaining residual working or royalty interests.