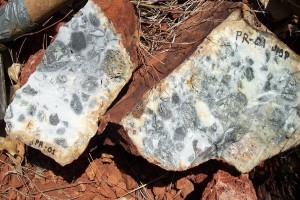 Bowmore Explorations Ltd. (TSX VENTURE:BOW)(FRANKFURT:OB5) is pleased to announce the commencement of a mapping and sampling program at its La Scie property, located along the Baie Verte Peninsula, NL.

A recently completed compilation of all historical work and exploration activities as well as assessment reports from the Newfoundland government identified several gold showings as well as anomalous gold zones. Recent sampling of structurally-controlled quartz veins within the Jason Burton bloc (see news release dated February 13, 2013) returned values up to 56.6 g/t Au. In addition of the two known gold showings, three gold occurrences (up to 1.7g/t), six gold geochemical anomalies, and several faults and folds were identified and will be prioritized for further follow up sampling and detailed mapping.

The program aims to further evaluate the property’s gold potential by conducting a first canvass of 300 m spaced traverses using major roads and ATV routes. The Company estimates that approx. 1000 rock samples will be collected based on property area (114.75 km2) and outcrop exposure. The Company will also focus its exploration activities on the southeast portion of the property (approx. 35km2) which has been underexplored.

The La Scie Property contains base and precious metal indications related to structurally controlled vein systems in addition to the La Scie Quartz Vein which is a testament to hydrothermal activity in the area. As well, the property is underlain predominantly by the Cape St. John Group which is generally considered to be, in part, correlative with the Pacquet Harbour Group (Evans, 2004, and references therein), host to the Rambler deposits, which have produced 106,593 tonnes Cu and 223,008 oz. Au as a by-product.

The net proceeds raised from the Placement will be used for eligible Canadian exploration expenses on the Company’s mineral exploration properties.

The Company paid aggregate finder’s fees of $42,000 (representing a 6% finder’s fee paid in respect of the subscriptions placed by the finders) and issued a total of 140,000 share purchase warrants (representing 5% of the Units placed by the finders). Each Finder’s Warrant will entitle the holder thereof to purchase one common share of Bowmore at a price of $0.35 each until January 8, 2015.

All securities issued pursuant to the Placement will be subject to a four month hold period expiring on November 9, 2013.

Jean-Marie Pronovost, P. Geo, a geologist to Bowmore, is the Qualified Person who has reviewed this news release and has approved the scientific and technical information about the La Scie Property reported herein.