Bonterra Resources Inc. (TSX-V: BTR) (OTCQX: BONXF) (FSE: 9BR2) is pleased to announce results from the ongoing expansion drilling campaign at its Gladiator project. The focus of this campaign is on expanding the size and scope of the Gladiator gold deposit and supplementing the recently updated mineral resource estimate (see press release dated June 23, 2021). The ongoing expansion drilling program at Gladiator has been a success thus far with several holes intersecting multiple mineralized intervals, which has effectively extended the targeted mineralized zones.

Assays from 18 expansion drill holes, including six holes outside the 2021 MRE, have been received since January 14, 2021. The assay results included in this press release are highlighted by:

Additionally, work on the the preliminary economic assessment is ongoing and is expected to be completed in Q4 2021.

Pascal Hamelin, CEO commented: “I’m very excited with the results to date from the ongoing drilling campaign at Gladiator. The grade and width of hole BA-21-23 bode well for the mining scenarios currently being evaluated in the PEA and hole BA-21-07 shows the great potential at depth at Gladiator. I look forward to sharing more assay results from the ongoing drilling campaign as they become available in the coming weeks.”

The Gladiator deposit consists of a set of shear hosted sub-vertical quartz veins oriented at 60 degrees azimuth and are spatially associated with felsic dykes. The zones named spatially from the north-northwest to the south-southeast are: The North Zone, Footwall Zone and the Main Zone. These three zones include several sub-parallel veins interpreted as dislocated folds in sheared structures. The North Dippers Zones consist of secondary shears/fractures occurring in more brittle lithologies within gabbroic sills and a porphyritic felsic intrusive stock situated between the principal sub-vertical shears. They consist of shear/fracture filling quartz veins dipping 45 to 75 degrees to the north and oriented east-west. The North Dippers include the Barbeau Zone, which is one of the most significant zones in size and continuity at the Gladiator deposit. The Rivage Zone is located just north of the North Zone and consists of sub-vertical narrow shear hosted quartz veins. The South Zone consists of a sub-vertical shear hosted veining trending 70 to 80 degrees azimuth that bounds and drags the southern extensions of the North Dipper Zones. All the deposit zones have a strong 45 to 50 degree plunge to the northeast and remain open at depth along the northeast plunge (Figures 1 to 5).

1) The meterage represents the length of the drilled lengths.
2) Estimated true widths for the interpreted Main, North, North Dipper, North Corridor, Rivage and South Zones range from at least 50% to 100% of the interval core length.
3) The mineralized intervals listed are above 0.5 g/t Au.
4) Gold results obtained between 0.1 and 0.5 g/t Au are represented as anomalous values.
5) Gold results obtained below <0.1 g/t Au are represented as no significant values. 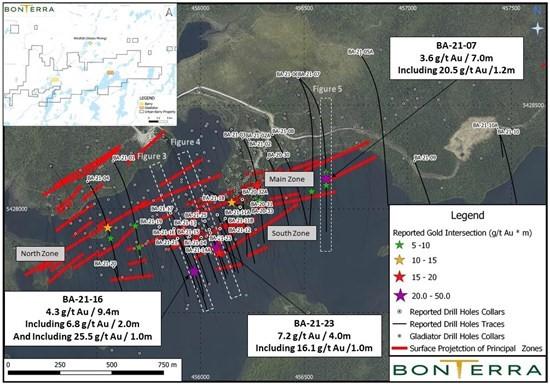 Drilling in the Gladiator eastern area has also intersected several gold mineralized intervals including the Footwall, North and North Dipper Zones of which the best intervals returned: 3.6 g/t Au over 7.0 m including 20.5 g/t Au over 1.2 m in hole BA-21-07 (Figure 2 and 5). 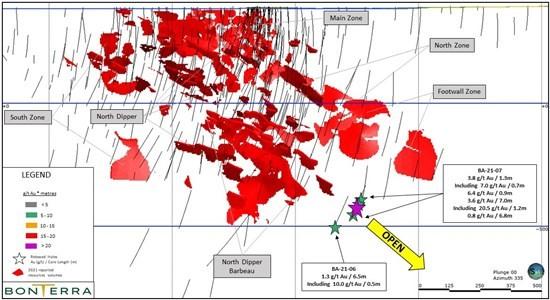 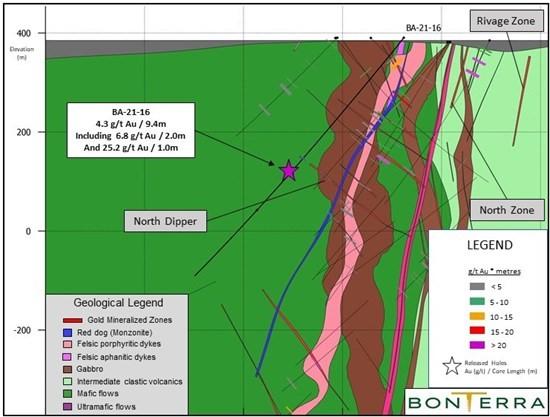 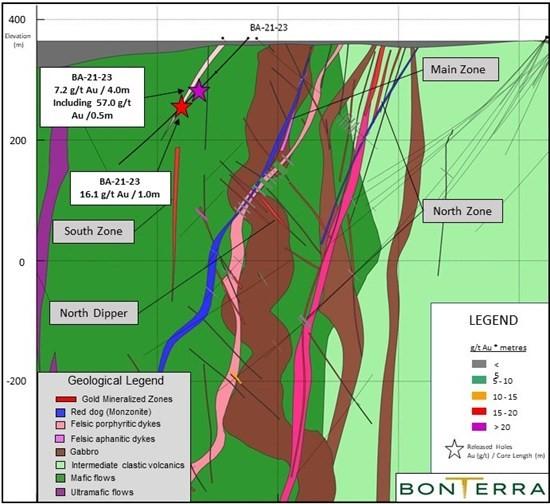 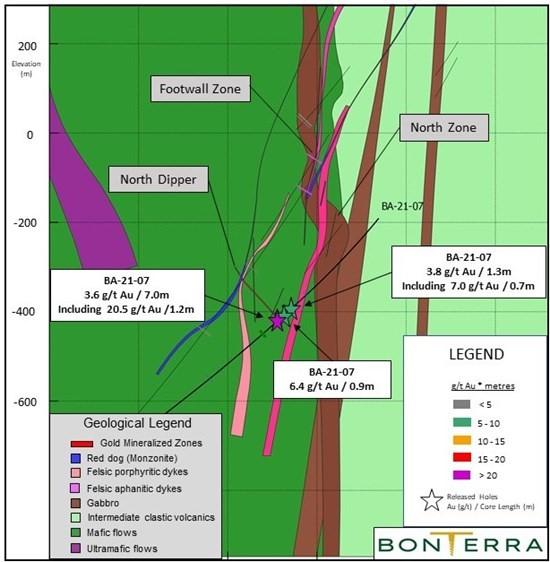