Bonterra Resources Inc. (TSX-V: BTR) (OTCQX: BONXF) (FSE: 9BR2) is pleased to announce results from the ongoing 16,500 metres drill campaign at its Gladiator project focused on expanding the size and scope of the project as well as improve grade continuity for the upcoming mineral resources update expected this summer. Assays from eight holes received since November 30, 2020 are included in this press release and were highlighted by:

Detailed results are presented in Table 1.

Pascal Hamelin, CEO commented, “Recent assays have expanded both the size of the mineralized system and confirmed the high-grade continuity for the Main and North Zones at Gladiator. Drilling has been mainly focused on expanding the known mineralized envelope and improving confidence. Drilling continues to progress well and is on track to complete the 16,500 m campaign at Gladiator before the upcoming mineral resources estimate update expected to be released this summer.”

The Gladiator deposit consists of three primary zones; the North, Main and Barbeau Zones. The North and the Main Zone are characterized by felsic dykes hosted mineralized quartz veins within steeply south-southeast dipping shear zones having developed at the contacts between mafic and intermediate volcanics and gabbroic intrusions. The Main Zone includes a secondary sub-parallel vein interpreted as a dislocated fold along the Main Zone structure. The North Corridor and South Zones are a series of mineralized zones spatially correlated with felsic dykes dipping to the south-southeast. These zones are interpreted to be subparallel and similar mineralized trends to the North and Main Zones. Additional “North Dipper” mineralized zones with trends moderately to steeply dipping northward, similar to the Barbeau Zone, are confirmed from the latest drilling (Figures 1 and 4).

1) The meterage represents the length of the drilled lengths.

3) The mineralized intervals listed are above 0.5 g/t Au. 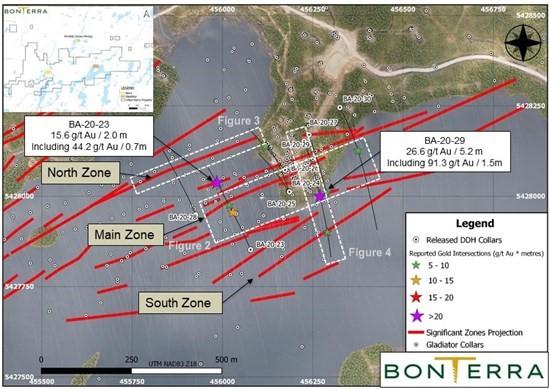 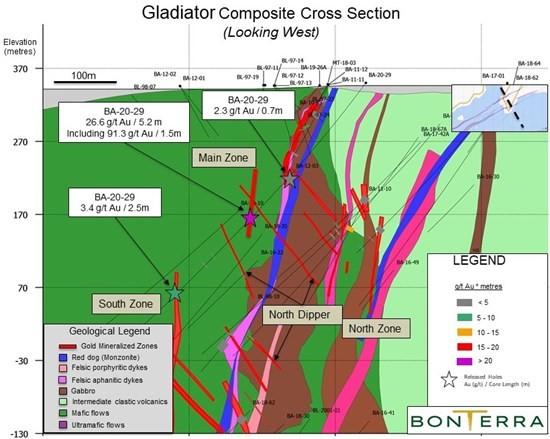 The Gladiator project’s drill core gold analyses are performed at the Bachelor Mine’s analytical laboratory. The Company employs a rigorous QA-QC analysis program that meets industry standards. The analyses are carried out by the fire assay (A.A.) with atomic absorption finish. Blanks, duplicates, and certified reference standards are inserted into the sample stream to monitor the Laboratory’s performance. The Company’s QA-QC program requires that at least 10% of samples be analyzed by an independent laboratory. These verification samples are sent to ALS Minerals laboratory facility located in Val-d’Or, Quebec. The verifications show a high degree of correlation with the Laboratory’s results.