The Company is currently drilling at a rate of approximately 6,000 m per month, focused on its main gold deposits to expand upon the recently released 2021 MREs. In addition, work on the preliminary economic assessment, which would utilize the existing Bachelor Mill as a central processing facility is ongoing and is expected to be completed in Q4 2021. 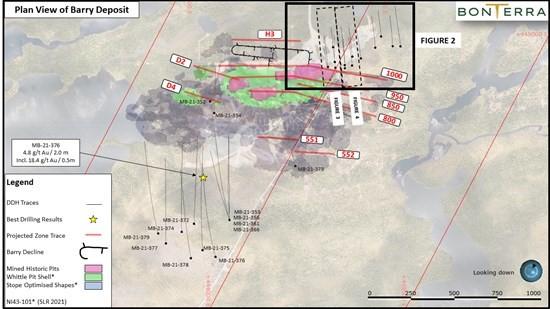 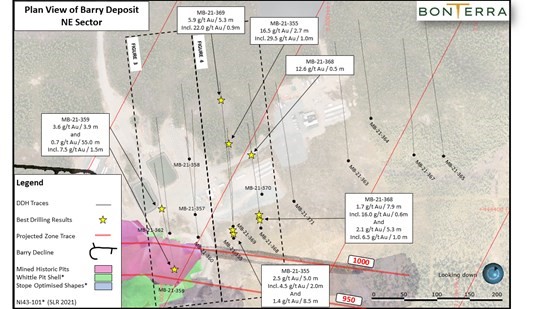 The Barry drilling campaign is currently focused on the expansion of key gold mineralized zones around the 2021 MRE. Multiple diamond drill holes tested open pit potential to the northeast of the open pit resource shell in the 2021 MRE and followed up on deeper intercepts in hole MB-20-323 in the same sector (see press release dated March 1, 2021). Near-surface mineralization above open pit cut-off grade was intercepted up to 100 m northeast of the existing pit shell (Table 1, Figures 2, 3 and 4). Mineralization remains open to the east. Drilling also confirmed the presence of several H-type zones north of the 1000 zone, returning high-grade intercepts at less than 200 m depth and laterally within 50 to 250 m of the existing resource along the 1000 zone (Table 1, Figures 2, 3 and 4). Follow-up drilling on these very promising targets is expected to begin soon in order to better define their geometries. Several drill holes also continued to test extensions of the H series structures to the southwest, with success along the H3 zone, outlining continued potential at depth (Table 1 and Figure 1). 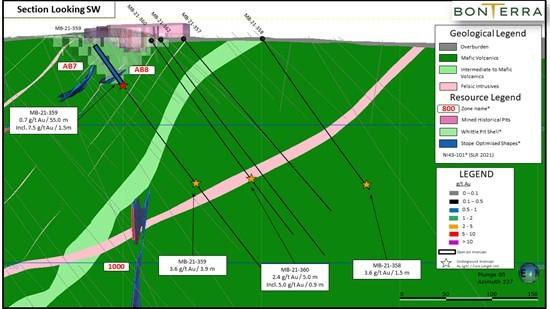 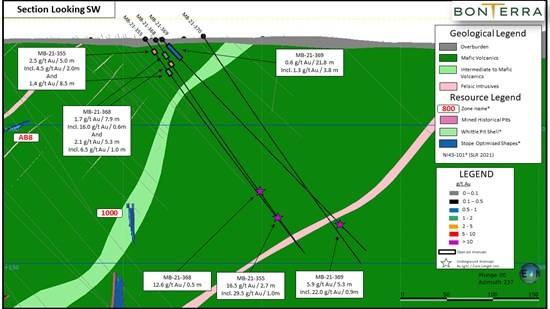 The Barry gold deposit is characterized by three dominant sets of structures, all dipping to the south-east. The sub-vertical shear zones and the H-Series shear zones dipping 25 to 40 degrees are hosted within intermediate to mafic volcanics and tuffs with local felsic intrusions. Contact zones dip at 50-65 degrees along the lower and upper contacts of the D1, D2 and D3 felsic intrusions with mafic volcanics. Gold mineralization is associated with disseminated sulfides within shear zones and veins with local visible gold. The Barry deposit has been delineated over 1.4 kilometres along strike and 700 m vertical and remains open for expansion.

Notes:
1) The length represents the interval of the drilled core.
2) True widths are estimated to be greater than 55% of the drill intersection length.
3) The shown mineralized intervals listed are above 0.5 g/t Au.
4) Gold results obtained below <0.1 g/t Au are represented as no significant values.

The Barry project’s drill core gold analyses are performed at the Company’s Bachelor Mine analytical laboratory. The Company employs a rigorous QA-QC analysis program that meets industry standards. The analyses are carried out by fire assay (A.A.) with atomic absorption finish. Blanks, duplicates, and certified reference standards are inserted into the sample stream to monitor the Laboratory’s performance. The Company’s QA-QC program requires that at least 10% of samples be analyzed by an independent laboratory. These verification samples are sent to ALS Minerals laboratory facility located in Val-d’Or, Quebec. The verifications show a high degree of correlation with the Laboratory’s results.

Marc Ducharme, P.Geo. and Bonterra’s Exploration Manager, has compiled and approved the information contained in this press release. Mr. Ducharme is a qualified person as defined by NI 43-101.