The 2020 drilling campaign at Gladiator resumed on July 23, 2020 with two drills in operation, one on a barge on Lake Barry and the other on land near the Gladiator deposit. Since July 23, 2020, the Company has drilled 22 holes representing a total of 7,559 m of a planned 16,000 m for the Gladiator regional area. Results from 19 holes have been received since the press release on April 24, 2020. Results from the remaining drilled holes are pending (Figure 1).

The Gladiator deposit consists of three primary zones; the North, Main and Barbeau Zones. The North and the Main Zone are characterized by mineralized quartz veins hosted within steeply south-southeast dipping shear zones having developed at the contacts of gabbroic and felsic dykes with mafic to intermediate volcanic rocks. The Barbeau Zone consists of quartz vein mineralization hosted by a shear zone dipping moderately to the north and correlates with an offset of the gabbroic and felsic dykes. Several secondary mineralized zones called “North Dippers” have been interpreted with orientations similar to the Barbeau Zone, moderately to steeply dipping north. A series of mineralized zones associated with felsic dykes are referred to as North Corridor, Footwall and South Zones and are interpreted to occur with similar orientations to the North and Main Zones dipping south-southeast (Figures 1 and 4).

1) The meterage represents the length of the drilled lengths.

3) The mineralized intervals listed are above 0.5 g/t Au. 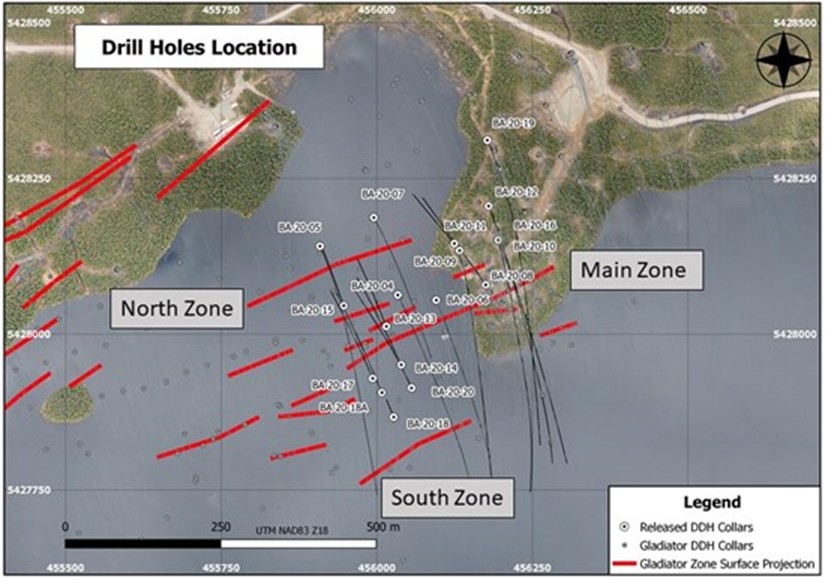 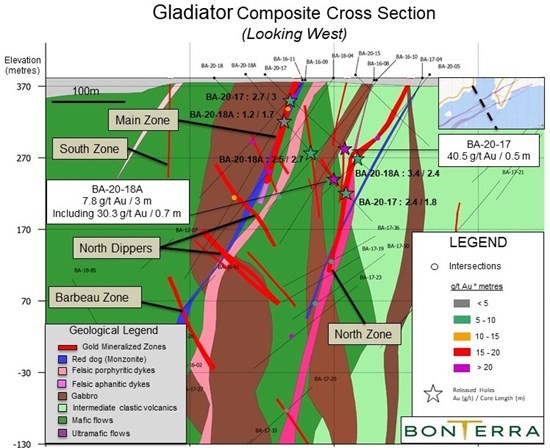 The Gladiator project’s drill core gold analysis is performed at the Bachelor Mine Analysis Laboratory. The Company employs a rigorous QA-QC analysis program that meets industry standards. The analytical results are carried out by fire assay (A.A.) in the mine laboratory. Blanks, duplicates, and certified reference standards are inserted into the sample stream to monitor laboratory performance. The Company’s QA-QC analytical verification program requires that at least 10% of samples be audited in an independent laboratory. These verification sample were sent to the ALS laboratory located in Val-d’Or, Quebec. The results of the audits are consistent with those obtained.