Bonterra Resources Inc. (TSX-V: BTR) (OTCQX: BONXF) (FSE: 9BR2) is pleased to announce the results from the ongoing drilling campaign at the Barry project. Recent drilling continues to expand the H series at depth in the SW sector and up-dip to the NW (Figure 1). The latest results encompass nine diamond drill holes designed to expand the 2021 mineral resource estimate released in June (see press release dated June 23, 2021), and one hole (MB-21-353) that was included in the MRE. Drilling highlights include 11.3 grams-per-tonne gold over 2.2 metres in the H15 zone.

The Company is currently drilling at a rate of approximately 10,000 m per month at its three main gold deposits to expand upon the recently released MREs. In addition, work on the preliminary economic assessment, which would utilize the existing Bachelor Mill as a central processing facility is ongoing and is expected to be completed in Q4 2021.

Pascal Hamelin, CEO commented: “Today’s drill results of the H series reinforce the expansion potential we see across the entire Barry project. More assay results are expected from Barry in the coming months as a backlog of pending results are returned from the laboratory and from the ongoing drilling campaign of expansion targets, which remain open in all directions.” 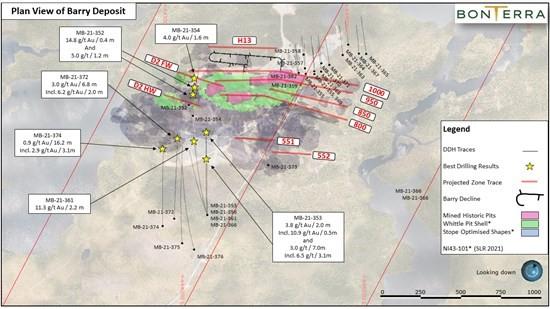 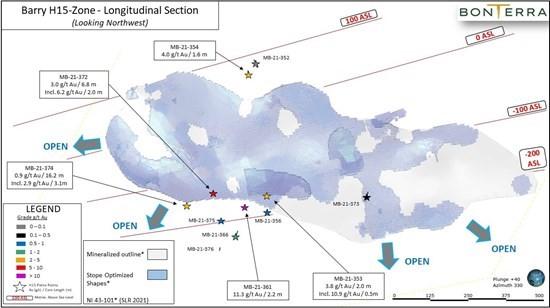 The Barry gold deposit is characterized by three dominant sets of structures, all dipping to the south-east. The sub-vertical shear zones and the H-Series shear zones dipping 25 to 40 degrees are hosted within intermediate to mafic volcanics and tuffs with local felsic intrusions. Contact zones dip at 50-65 degrees along the lower and upper contacts of the D1, D2 and D3 felsic intrusions with mafic volcanics. Gold mineralization is associated with disseminated sulfides within shear zones and veins with local visible gold. The Barry deposit has been delineated over 1.4 kilometres along strike and 700 m vertical and remains open for expansion.

The Barry drilling campaign is currently focused on the expansion of key gold mineralized zones around the MRE. Drilling results presented here targeted the expansion of “H-Series” and “Contact” zones in the west sector at depth and up-dip in the footwall of the D2 intrusive. These results confirm the potential to continue expanding these zones, with success along the H15 and D2 HW zones (Table 1; Figures 1 and 2). These zones remain open across the Barry deposit. Two new H series zones were also identified in the NW sector nearer to surface in the FW of the D2 intrusive in hole MB-21-352, outlining the remaining potential within the deposit’s footprint (Table 1; Figure 1). Drilling also targeted the NE of the deposit but assays are still pending (Table 1; Figure 1).

Notes:
1) The meterage represents the length of the drilled lengths.
2) True widths are estimated to be greater than 70% of the drill intersection length.
3) The mineralized intervals listed are above 0.5 g/t Au.
4) * Zones renamed in the 2021 MRE report, see Table 2 for reference.

Several zones were renamed by SLR Consulting (Canada) Ltd. during the completion of the Barry 2021 Resource Estimate in order to facilitate the estimation process. An equivalence table for relevant zones is presented below in Table 2. Names used in the text of this press release are based on Bonterra’s pre-resource estimation nomenclature for continuity.

Notes:
1) Names used in this press release are according to Pre-2021 MRE Terminology.

The Barry project’s drill core gold analyses are performed at the Company’s Bachelor Mine analytical laboratory. The Company employs a rigorous QA-QC analysis program that meets industry standards. The analyses are carried out by fire assay with atomic absorption finish. Blanks, duplicates, and certified reference standards are inserted into the sample stream to monitor the Laboratory’s performance. The Company’s QA-QC program requires that at least 10% of samples be analyzed by an independent laboratory. These verification samples are sent to ALS Minerals laboratory facility located in Val-d’Or, Quebec. The verifications show a high degree of correlation with the Laboratory’s results.

Marc Ducharme, P.Geo. and Bonterra’s Exploration Manager, has compiled and approved the information contained in this press release. Mr. Ducharme is a qualified person as defined by NI 43-101.