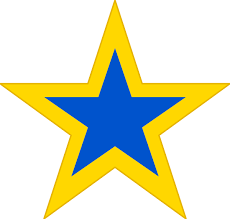 Highlights from the on-going program

Currently two drills are operating on the property with 4,590m of diamond drilling completed to date in 22 drill holes representing approximately 80% of the planned meters. Drilling to date has focused on targets proximal to the historical Flood Zone resource area with two holes reported today evaluating lightly drilled, geologically complex areas in the Flood Zone. Subsequent drilling has evaluated parallel altered and mineralized trends within 750m of the Flood Zone which include the Axis and Central Zones and targets within the Gnu Zone area. Additional drilling also included the NFN target approximately 5 kms to the north along the Ulu fold hinge.

“Flood Zone drilling this year was very selective to assist in refining the geological modeling with the results announced today indicating that even drilling for geology provides robust grade and widths. The campaign to date has successfully tested portions of the proximal Axis and Central zones, located roughly 125m and 250m northeast of the Flood Zone resource respectively. The team is very excited about evaluating the intersection of these two mineralized trends as they approach the Gnu Zone which now contains at least four sub-target areas defined by their style of mineralization,” commented Darren Lindsay, Vice President Exploration.

Having recently completed a site visit, CEO Grant Ewing stated, “The current field program is operating smoothly, and it is very encouraging to see the continued strong results from the Flood Zone drilling, and from the new vein system discovered in the Gnu Zone area ~750 metres to the northeast. The current technical team have developed a strong understanding of the geologic controls of the mineralization and are adept at using visual observations of the drill core to aid in the targeting and testing of high priority targets. This is especially important given the slow turnaround of assay results from the lab.”

21BSG-001: This drill hole was used to evaluate a complex area in the shallow southeast part of the Flood Zone proximal to the sediment – basalt contact and also evaluate an inferred Axis trend subzone at a moderate depth. The lithologies intercepted include a number of basalt flows intruded by a narrow quartz-feldspar porphyry dike, a thin sedimentary horizon and a gabbroic unit. Well-developed calc-silicate alteration hosts the 7-10 % acicular arsenopyrite mineralization; locally small specks of visible gold were observed in the more silicified/veined sections. An inferred late, distinctive epidote-pyrite breccia zone was observed below the initial target and continued to the expected extension of the Axis zone which returned no significant values.

21BSG-002: Historical drilling in the area of this drill hole was oblique to the mineralization trend, therefore this hole was collared to drill appropriately across the mineralized zone. Lithologies intercepted include the host basalt flows interlayered with sediments, a gabbroic body (possible coarse flow) all intruded by a diabase dike. An intensely silicified alteration zone with K-feldspar and diopside hosts the 7-10% acicular arsenopyrite with pyrite, pyrrhotite and fine specks of visible gold.

Intervals reported in the table above are core lengths and gold assay values are uncut. 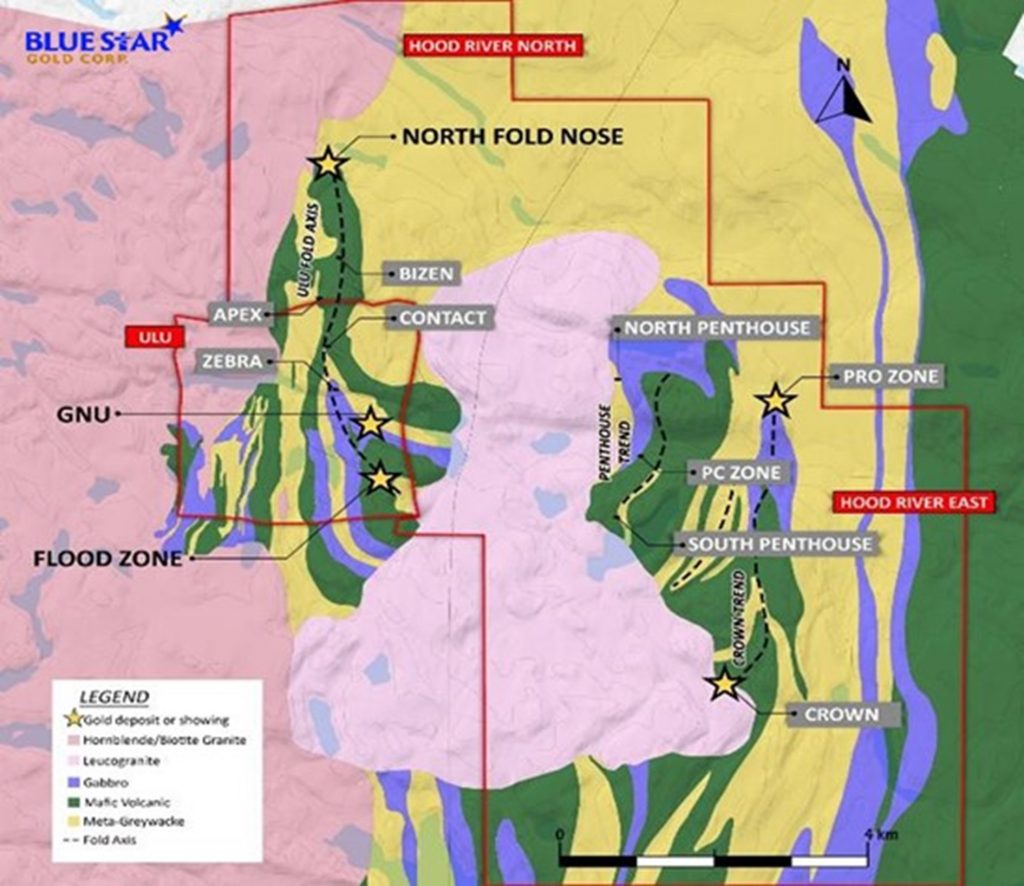 Figure 1: Map of the Ulu and Hood River Area. 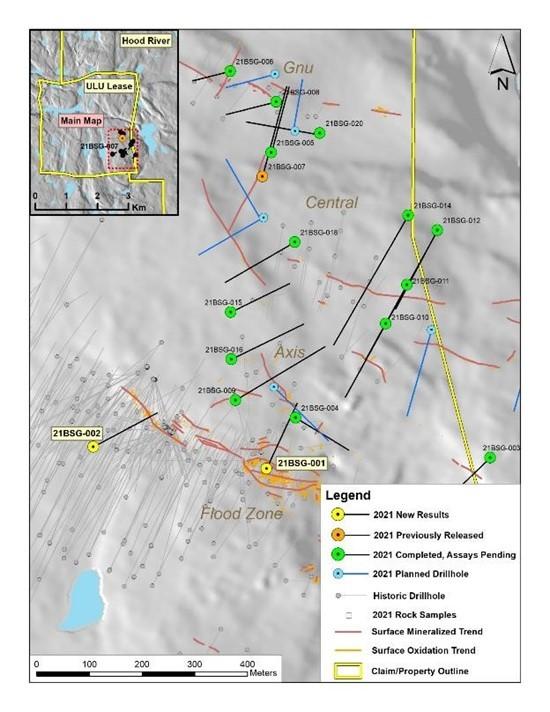 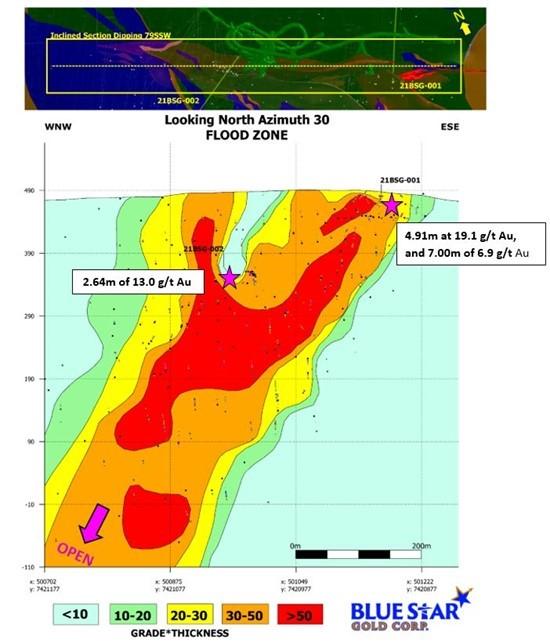 The Exploration campaign is evaluating several high priority targets in the area of the known high-grade Flood Zone Gold Deposit on the Ulu Project, and on high potential targets along the Ulu fold hinge. Numerous priority targets exist along the 5 km long Ulu Anticline which extends from the Flood Zone Deposit on to the contiguous Hood River Project up to the North Fold Nose Zone. Objectives of this year’s program include better understanding the controls of higher-grade zones within the hosting structures, evaluating additional structures on and adjacent to the Ulu fold hinge, and expanding and infilling previously known but undertested mineralized zones.

Initial field work to evaluate known targets and geological controls on potential mineralization on the Roma Project and the Crown-Pro section (Hood River Project) are also part of the program designed to generate a robust pipeline of targets for Blue Star Gold on its extensive 100% controlled land package.

Full collar tables and assay tables will be made available on the website in due course. Core samples are being cut by core saw with one half of the core retained and the other half sent for analysis. Samples are being prepared by ALS Yellowknife-Geochemistry and being analyzed at ALS Global, North Vancouver. Gold analysis is by fire assay using ALS code Au-AA26 and multielement analysis by code ME-MS61. Control samples include a crush duplicate every 20 samples; certified reference material is being inserted once every ten samples. Reported assay intervals use a minimum 2 g/t gold assay cut off with the inclusion of up to 3m of material below cut-off. True widths for all but the Flood Zone are not known due to lack of drilling and may range from 30% to 90% of drilled lengths.

Darren Lindsay, P. Geo. and Vice President Exploration for Blue Star, is a Qualified Person under National Instrument 43-101 and has reviewed and approved the technical information contained in this news release.

Blue Star is a gold company focused on exploration and development within Nunavut, Canada. The Company owns the Ulu Gold Property lease, an advanced gold project, and the highly prospective Hood River Property that is contiguous to the Ulu mining lease. With the recent acquisition of the Roma Project, Blue Star now controls over 16,000 hectares of highly prospective and underexplored mineral properties in the High Lake Greenstone Belt, Nunavut. A significant high-grade gold resource exists at the Flood Zone deposit (Ulu lease), and numerous high-grade gold occurrences and priority targets occur throughout the Ulu, Hood River and Roma Projects.