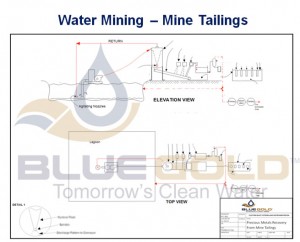 Blue Gold Water Technologies Ltd. is a water remediation company with a suite of patented technologies and proprietary nano-biotechnology that provides environmentally safe solutions for water purification, restoration and contamination issues.  The Company uses the EPA guidelines as a benchmark for what constitutes safe agricultural or drinkable water, and tailors these guidelines to those standards that are acceptable in the jurisdiction in which the technology is used. Additionally, the Company’s technology can be used to recover heavy and precious metals from mine tailings.

The first water treatment facility began operating on January 14, 2012 in Mexico. It has been successfully removing leachate from water in a landfill and producing clean water certified by Conaqua, the federal water commission of Mexico.

In addition, the Company has a patent pending technology that recovers precious metals contained in tailings. At the end of the process, the water is remediated and can be reused.  The first contract has been signed to re-treat PGM rich chrome tailings materials. The unit is expected to be installed in the second half of 2013.

The Company’s suite of technologies includes: (i)PUREINATORTM, (ii) SMARTSANTM, (iii) LAREMUTECTM, and (v) DESALTTM 1000/2000 & DESALTTM 5500. These technologies can be utilized as separate solutions or in combination with one another, to accommodate specific client requirements.

The Company’s current business model is based on entering into long term agreements (plant installation and operating agreements) with clients pursuant to which the Company funds the capital costs of building and installing its treatment plants. Pursuant to a plant installation and operating agreement, the client pays the Company a negotiated dollar value per cubic meter of treated water with a negotiated guaranteed minimum number of cubic meters to be treated per annum.

The Company also holds a 100% undivided interest in the Holy Cross Property, which consists of a single mineral exploration tenure covering 2,005 hectares within the Omineca Mining Division of north central British Columbia.