Benz Mining Corp. (TSX-V: BZ) (ASX: BNZ) is pleased to announce long awaited assays results for the start of its 2021 drilling campaign. Results come predominantly from NW Zone which is quickly emerging as a new high-grade lodes system and has the potential to become an integral part of the Eastmain deposit. 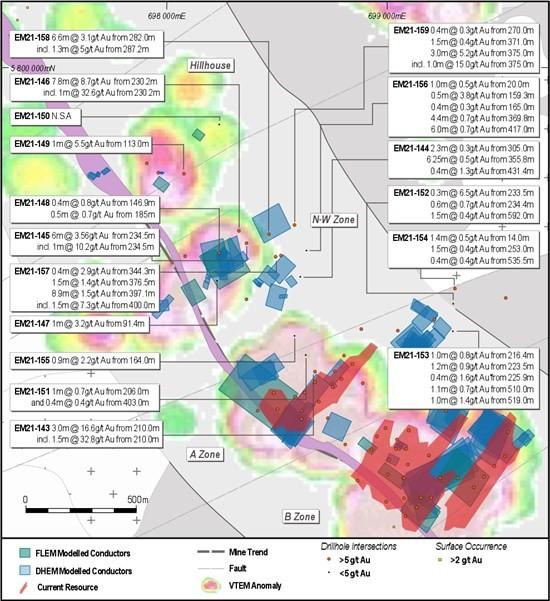 CEO, Xavier Braud, commented: “We are glad to finally be able to release assay results from Eastmain, especially when they are great results. DHEM of historical holes at NW Zone had showed us many undrilled conductors. We drilled them and now we know that NW Zone is mineralised and presents the exact same characteristics as A, B and C Zones and poses as a new high-grade zone of the Eastmain deposit. This first pass scout drilling is wide spaced with drilling centres 100m apart and more. We have identified mineralisation over a large 400x 400m area and, more importantly, we have clearly identified two mineralised parallel horizons, both of which are proving to be gold bearing.

“Eastmain is delivering above expectations and our exploration methodology utilising electromagnetics to guide discoveries continues to be extremely successful. We have identified conductors over a strike length of 6km and, to date, we haven’t drilled a single conductor which has not returned the right geology. Every target we drill bring more information and we are gradually unlocking the full potential of the Eastmain deposit.

We now have over 150 DHEM conductors in the system and we are systematically drilling them. The DHEM data from NW Zone shows strong undrilled off-hole conductors near our high-grade intervals. Follow up drilling will start as soon as we increase our drilling capacity with a third rig arriving in the second half of August.” 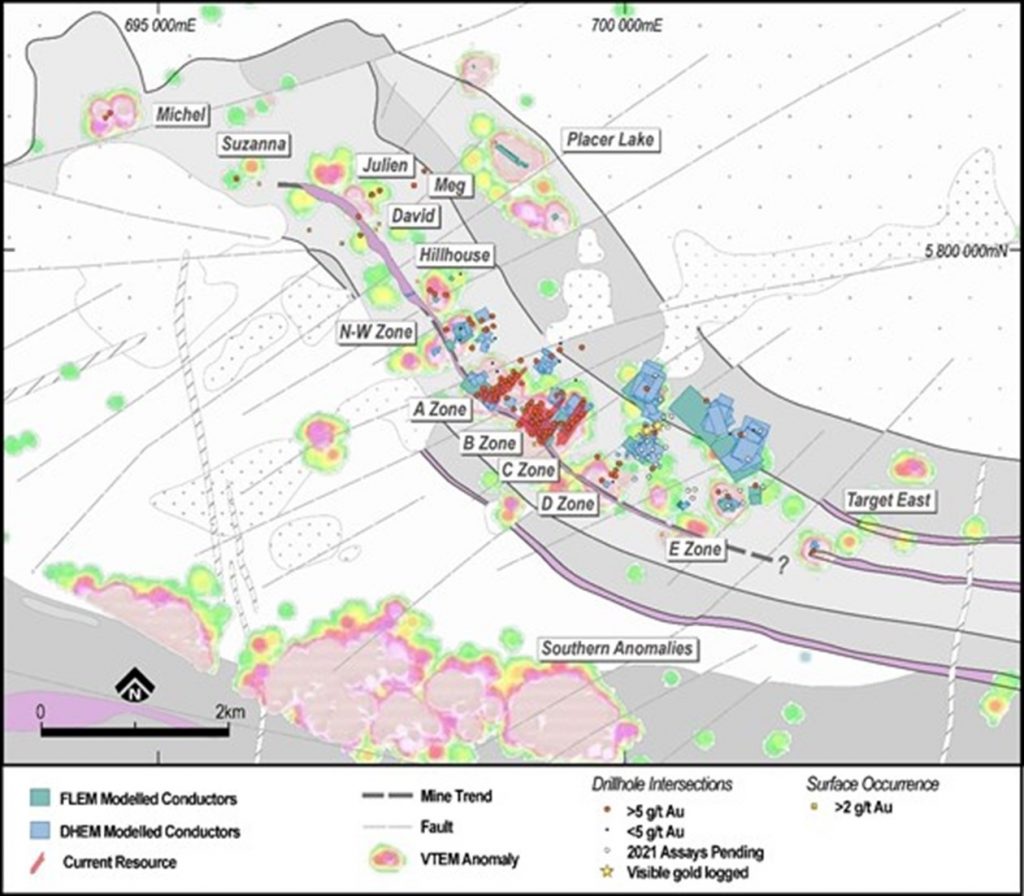 The NW Zone is located about 600m to the NW of the A Zone mineralised lens and camp infrastructure and can be accessed by a trail in summer. The mineralised horizon is associated with a strongly biotite, sericite, silica and carbonate altered mylonite located within deformed and altered ultramafic rocks. Sulphide content varies from 1-2% to up to 20% in sulphide veins, with xenoliths of enclosing rocks, often associated with quartz veins. There are also stringers and patches of sulphides. Garnet porphyroblasts are also observed in association with the more biotite altered rocks.

The newly discovered Nisto trend at the NW Zone and A Zone is found between 100 and 200m deeper than the Mine Horizon. Mineralisation is hosted at the contact between strongly deformed and altered sediments (wackes and conglomerate) and ultramafics with stringers and patches of pyrrhotite and chalcopyrite. Garnet porphyroblasts are locally observed in association with the more biotite rich rocks.

All coarse crush rejects from this set of results have been shipped to Australia to be re-assayed by PhotonAssay.

The 16,000 samples re-analysis of 2020 drilling rejects by PhotonAssay is progressing with samples at Minanalytical Perth and Kalgoorlie facilities.

The Eastmain Gold Project, situated on the Upper Eastmain Greenstone Belt in Quebec, Canada, currently hosts a NI 43-101 and JORC (2012) compliant resource of 376,000oz at 7.9gpt gold (Indicated: 236,500oz at 8.2gtp gold, Inferred: 139,300oz at 7.5gtp gold). The existing gold mineralisation is associated with 15-20% semi-massive to massive pyrrhotite, pyrite and chalcopyrite in highly deformed and altered rocks making it amenable to detection using electromagnetic techniques. Multiple gold occurrences have been identified by previous explorers over a 10km long zone along strike from the Eastmain Mine with very limited but highly encouraging testing outside the existing resource area. Benz has subsequently identified over 150 DHEM conductors over a strike length of 6km which is open in all directions.

This press release was prepared under supervision and approved by Dr. Danielle Giovenazzo, P.Geo, acting as Benz’s qualified person under National Instrument 43-101.

Benz Mining Corp. brings together an experienced team of geoscientists and finance professionals with a focused strategy to acquire and develop mineral projects with an emphasis on safe, low risk jurisdictions favourable to mining development. Benz is earning a 100% interest in the former producing high grade Eastmain gold mine, Ruby Hill West and Ruby Hill East projects in Quebec.

The Eastmain Gold Project is situated within the Upper Eastmain Greenstone Belt in Quebec, Canada and currently hosts a NI 43-101 and JORC (2012) compliant resource of 376,000oz at 7.9gpt gold. The existing gold mineralization is associated with 15-20% semi-massive to massive pyrrhotite, pyrite and chalcopyrite making it amenable to detection by electromagnetics. Several gold mineralization occurrences have been identified by previous explorers over a 10km long zone along strike from the Eastmain Mine with very limited testing outside the existing resource area. 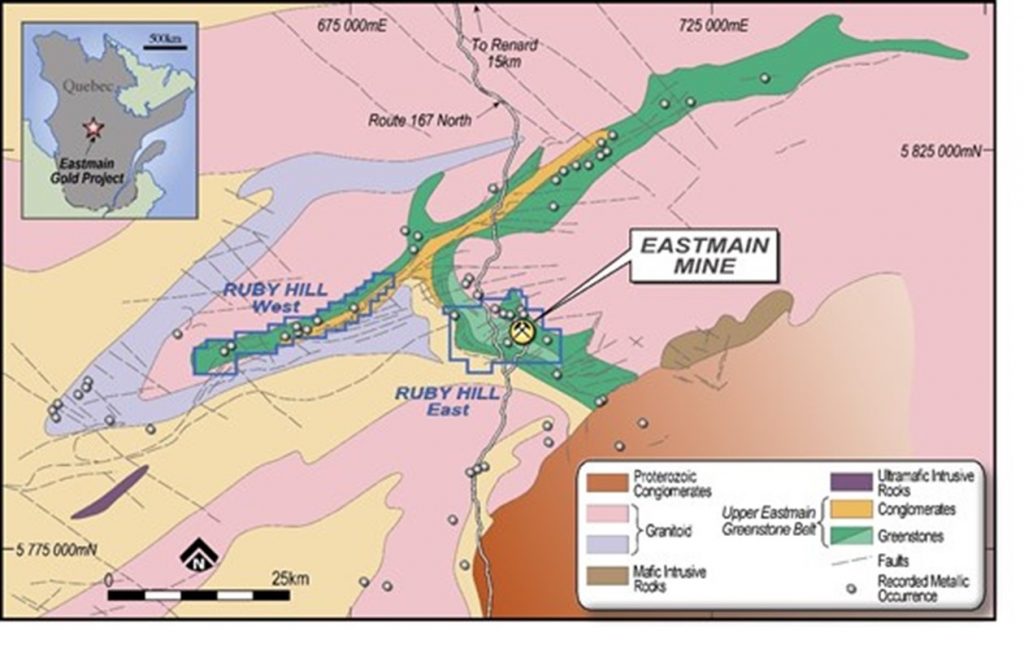