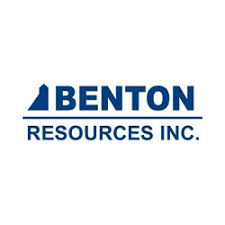 Benton Resources Inc. (TSX-V: BEX) is pleased to announce that the Company has entered into a binding Letter Of Intent with White Metal Resources Corp (TSX-V: WHM) whereby Benton can earn up to a 70% interest in WHM’s Far Lake project located 80km west of Thunder Bay, Ontario.

Recent exploration completed by WHM led to the discovery of a high-grade, semi-massive sulphide copper occurrence. Recent trenching and sampling programs at the Far Lake copper-silver-gold project provided results that include a 0.7m channel sample across massive sulphide that assayed 22.0% Cu, 30.2 g/t Ag, and 0.25 g/t Au as well as another channel sample that graded 3.54% Cu over 3m, including 4.96% Cu over 1m. Mineralization is located within a northwest-southeast trending, brecciated and silicified structure that bisects a regional granitic pluton. Sulphide mineralization in the structure has been delineated for approximately 400m and remains open in all directions. In addition, a parallel zone 2.1km west of the copper occurrence was located in the spring of 2020 and exhibits a similar intense brecciation and silicification. This second structure has been traced intermittently over a 5km strike length with chalcopyrite (copper sulphide) mineralization occurring throughout. The new zone is highly silicified and exhibits brecciation and an abundance of quartz veining with local silicified areas measuring up to 200m wide. Mineralization identified to-date on the Property displays characteristics suggestive of multiple mineralizing events, at both the property and regional scale.

Beyond the large silicified zones, the project also contains a boulder that was assayed by WHM and contained 0.293% Cu, 1.71g/t Pd, 0.3g/t Pt and 0.219g/t Au. Locating the source of this boulder will be an important activity to prove that Far Lake has the potential to also not only host copper-silver-gold, but also PGE’s. The appearance of the boulder suggests the bedrock source is not far and only traveled a short distance during glaciation.

While the project is very early stage and has little historical exploration, there are a number of exciting targets that can be efficiently explored. The Project has excellent infrastructure with multiple logging roads accessing the property via the Trans-Canada Highway. Surprisingly, prior to the work completed by WHM in 2017, the Far Lake area as seen no documented historical exploration and its strategically located along the Quetico Fault and between Benton’s Bark and Baril Lake projects (currently under option to Rio Tinto Exploration Canada) and the Escape Lake and Thunder Bay North deposits which Benton recently sold its option rights on to Clean Air Metals Inc. (see the location map included below or on www.bentonresources.ca)

The Company may, subject to regulatory approval, exercise the Initial Option by paying $205,000, issuing 1.6 million common shares and completing $1 million in exploration expenditures over four years as follows:

Within 90 days of completing the Initial Option, the Company may at its election exercise the Second Option by: 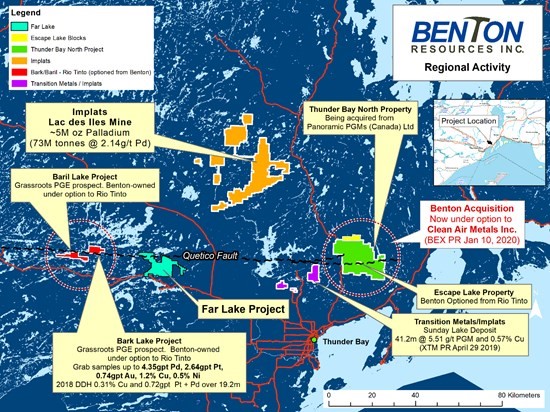 Nathan Sims (P.Geo.), Senior Exploration Manager for Benton Resources Inc., the ‘Qualified Person’ under National Instrument 43-101, has approved the scientific and technical disclosure in this news release and prepared or supervised its preparation.

Benton Resources is a well-funded Canadian-based project generator with a diversified property portfolio in Gold, Silver, Nickel, Copper, and Platinum group elements. Benton holds multiple high-grade projects available for option which can be viewed on the Company’s website. Most projects have an up-to-date 43-101 Report available.