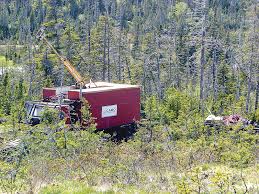 The 2016 drilling program provided the team with numerous insights into the nature of this project. It allowed the team to revise the geologic and resource models to better represent the intrinsic nature of the mineral resource, and make a re-assessment to the overall approach and layout of the proposed mine design.

The PEA is based on the mineral resource estimate completed by Marc Jutras, P.Eng., M.A.Sc., outlined in the National Instrument 43-101 technical report update.

Highlights from the PEA, with the base-case gold price of $1,306 (U.S.) per ounce and an exchange rate of $1.26 CAD/USD, are as follows (all figures in Canadian dollars unless otherwise stated):

Chris Dougherty, P.Eng., President of Nordmin stated “the PEA Update is something we felt necessary given the extensive work we have completed in the last 6 months. The understanding developed through the completion of the 5000 metre drilling campaign in November has positively changed our overall knowledge and understanding of these zones”.

All of the economics are completed on Indicated and Inferred categories of the resource model.

The table below compares the change in IRR and NPV from the 2016 PEA and the 2017 revision.

“The receipt of a positive PEA demonstrating strong economics over the life of mine is a major milestone for Benton,” stated Stephen Stares, President and CEO of Benton. “We see numerous opportunities to further enhance the economics through additional studies and exploration with a high probability for resource expansion and good potential for new discoveries across the property. We will now focus on advancing the Cape Ray project toward feasibility through additional exploration, environmental permitting and further studies”. Benton recognizes that this is an undeveloped area of Newfoundland. As such, protecting the environment is of great importance. To facilitate the development of a sustainable project, Nordmin, the joint partner, has experts on staff to complete the necessary studies required concerning environmental monitoring, assessment and permitting matters.

The Company has initiated work towards firming up costs and preparing a prefeasibility study. Apart from further metallurgical studies, the work will include drilling and tailings characterization as well as environmental baseline studies, hydrology monitoring, flora and fauna studies. A NI 43-101 technical report for Cape Ray PEA will be filed on SEDAR (www.sedar.com) within 45 days.

The reader should be cautioned that the PEA is preliminary in nature. It contains inferred mineral resources that are considered too speculative geologically to have the economic considerations applied to them that would enable them to be categorized as mineral reserves. There is no certainty that the results of the PEA will be realized.

The Cape Ray Project has been envisioned as an open-pit mine with starter pits for all the zones and one underground mining operation for the 51 zone. Open-pit and underground mining are anticipated to be completed by contract mining companies. The equipment will be supplied by the contractor that is awarded the work.

Grid electrical power will provide the majority of the electrical power to the project over the life of the mine. The work force is expected to come from the Isle aux Morts area for the operation of the Mill. The rest of the workforce will be the responsibility of the contractor.

Operations for the Cape Ray project is planned to have both Open Pit and Underground Mining. Each zone will be campaigned separately with the use of contractors. The initial estimated mill feed will come from the 04 zone. Once the 04 pit is completed the 51 pit will commence to be mined followed by the 41 pit. The underground development for the 51 zone will start during the mining of the 41 pit. The start of the Window Glass pit will begin once the 41 pit is mined. The Window Glass pit and 51 underground zone will be mined simultaneously. All the zones will give a current mine life of 9 years combined at a milling through-put of 1,000 tonnes per day. The process plant includes conventional crushing, grinding, gravity, and whole ore cyanide leach. A gold and silver doré will be produced on site. Process reagents will be removed from the plant tailings prior to placement in a tailings management facility.

Going forward, the team will be working on laying out the next 5000 metre drilling program that will commence this summer, which will also include some geotechnical drilling to support the pit designs and other work on site and continue to work towards environmental milestones to progress the project to the next phase.