Benchmark Metals Inc. (TSX-V: BNCH) (OTCQB: CYRTF) (WKN: A2JM2X) is pleased to report continued drilling success at the Amethyst Gold breccia (AGB) Zone. Intersections include the discovery of new parallel zones in addition to along strike and down-dip extensions of both broad bulk-tonnage and high-grade mineralization. Drill hole 19AGBDD004 intersected 1.38 g/t gold and 50.76 g/t silver or 2.02 g/t AuEq across 50.00 metres core length and 11.30 g/t gold and 2,360 g/t silver or 40.8 g/t AuEq across 1 metre core length from a deeper zone (Table 1). This result in conjunction with nine holes drilled at AGB in 2019 expanded the zone to a drill indicated strike length of over 550 metres and 170 metres vertical depth. The Lawyers Project is situated in the Stikine Terrane of northern British Columbia, Canada, and falls within the prolific, mineral endowed ‘Golden Horseshoe’.

John Williamson, CEO commented, “The 2019 drilling at AGB has discovered new mineralized zones, characterized by different styles of mineralization, which include both high grade and bulk-tonnage intervals. As a discrete zone, AGB is showing some of the highest-grade potential across the Lawyers Trend including 2019 results that provided 5.01 AuEq across 25 metres core length and 47.21 AuEq across 2.95 metres core length.

Historically the mineralization targeted by drilling at AGB is characterized by multi-phase veining, silicification and brecciation and is known as the “amythest gold breccia”. This style of mineralization is characteristically ~15-25m wide and hosted in a quartz eye tuff unit, occurring in the footwall of a major fault zone. Benchmark’s 2019 drilling at AGB discovered a second zone characterized by more discrete veinlets bearing Au-Ag and sulfide minerals, that is hosted higher in the stratigraphy, in the porphyritic andesite and interbedded volcanic sediments. This new zone was intersected in seven of the 2019 drill holes at AGB, including 350m along strike to the south in drill hole 19AGBDD009.

*Using an 80 to1 ratio of silver to gold $/oz
**Intervals are core-length. True width is estimated between 80 to 90% of core length.
***Drill hole results already reported 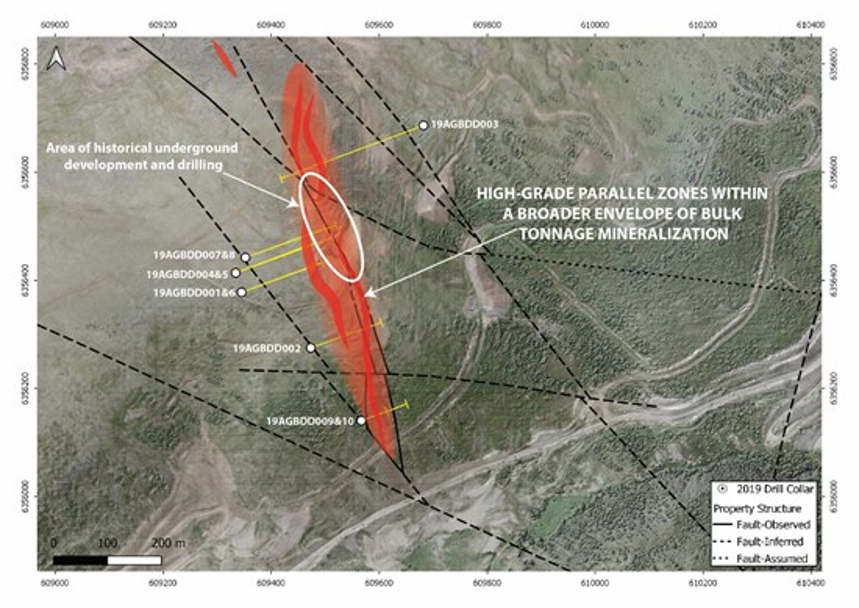 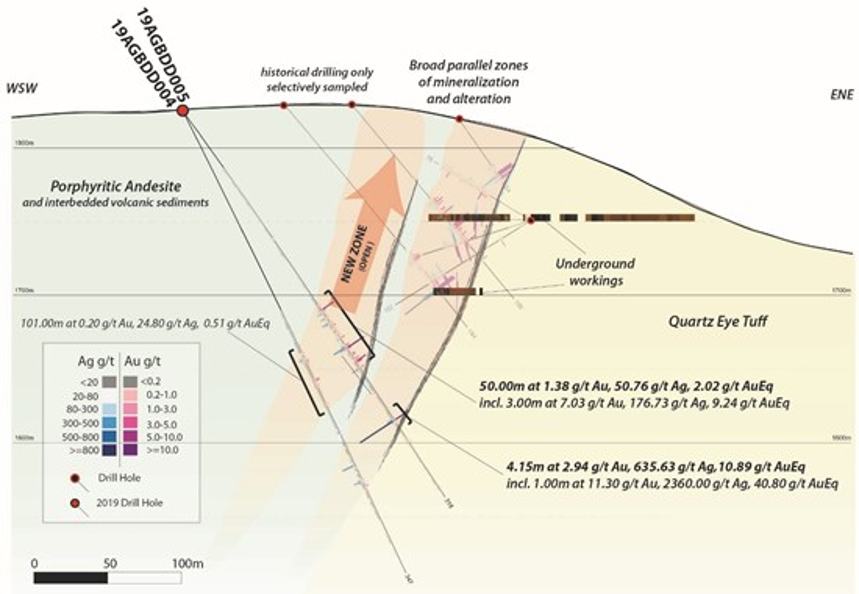 Results from samples were analyzed at ALS Global Laboratories (Geochemistry Division) in Vancouver, Canada (an ISO 9001:2008 accredited facility). The sampling program was undertaken by Company personnel under the direction of Rob L’Heureux, P.Geol. A secure chain of custody is maintained in transporting and storing of all samples. Gold was assayed using a fire assay with atomic emission spectrometry and gravimetric finish when required (+10 g/t Au). Analysis by four acid digestion with 48 element ICP-MS analysis was conducted on all samples with silver and base metal over-limits being re-analyzed by atomic absorption or emission spectrometry. Rock chip samples from outcrop/bedrock are selective by nature and may not be representative of the mineralization hosted on the project.

The technical content of this news release has been reviewed and approved by Michael Dufresne,
P.Geol., P.Geo., a qualified person as defined by National Instrument 43-101.

Benchmark is a Canadian mineral exploration company with its common shares listed for trading on the TSX Venture Exchange in Canada, the OTCQB Venture Market in the United States, and the Tradegate Exchange in Europe. Benchmark is managed by proven resource sector professionals, who have a track record of advancing exploration projects from grassroots scenarios through to production.